Whoever wins, we also kinda win too, I guess.

Remember in "Lethal Weapon" how Mel Gibson would bet his co-workers he could get himself out of a straitjacket with no help? So then he would dislocate his shoulder and get out of the straitjacket, but then have to put the shoulder back into place by banging it into a filing cabinet or something? It's a pretty iconic scene and one I've remembered in great detail ever since I was a kid.

Imagine my thrill of surprise when halfway into their giant climactic fight in "Godzilla vs. Kong," the giant ape gets his arm dislocated and resets it by banging it back into place. The only difference is that there are no filing cabinets that size, so he USES A SKYSCRAPER to knock it back in! Finally, being a dorky ass kid with no friends in middle school is starting to pay off! 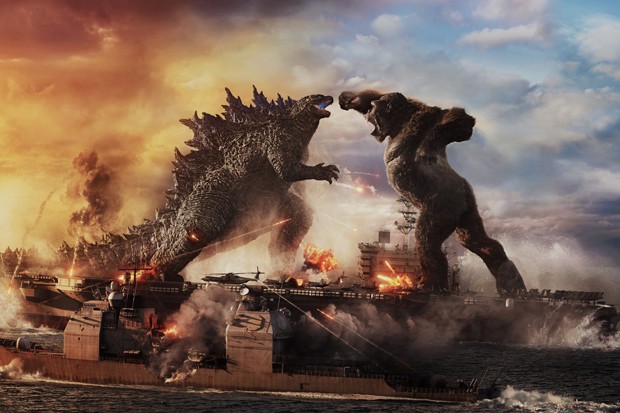 But if your brain says to you "Hey man, why would a giant ape reset his shoulder like he's in a 1980s buddy cop comedy? His brain wouldn't have the capacity to Mel Gibson his way out of a situation," then this is not the movie for you. This is director Adam Wingard ("The Guest" and "Death Note") basically mashing all of his action figures together and seeing what looks the coolest. I watched this movie a few days ago and I'm not sure that I can accurately describe the plot, but I sure as hell remember the visuals.

"Godzilla vs. Kong" is the fourth movie in the MonsterVerse, the shared cinematic universe featuring 2014's "Godzilla," 2017's "Kong: Skull Island" and 2019's "Godzilla: King of the Monsters." It might help to see those other ones first because there are things that carry over, like Millie Bobby Brown's character Madison Russell and Kyle Chandler as her father Mark, plus there's the group Monarch that oversees whatever's going on with the Kaiju—but don't worry if you don't have a chance to get caught up. The first 20 minutes might be a bit confusing, but once the giant lizard and the mad monkey start throwing punches then the plot doesn't really matter that much anyway.

Don't get me wrong, there's a ton of plot. Way too much of it. In fact, for the entire runtime, three different movies are going on: Brown teams up with her platonic best friend and a conspiracy theory obsessed podcaster (played by the film stealing Brian Tyree Henry) to figure out why Godzilla has started randomly attacking things; Meanwhile, Alexander Skarsgård and Rebecca Hall team up with King Kong to, I shit you not, take a magnetic spacecraft to the center of the Earth to find a weapon that might kill the God of Zillas. And then the third movie is just Godzilla and Kong throwing down every time they get near each other.

This is a messy and ridiculous movie. Whenever it slows down to deal with plot, the film almost loses the thread completely, but with Wingard's eye-melting visuals, the genuine excitement of seeing these two icons of cinema kicking the hell out of each other earns a lot of goodwill, if not from everyone, as least from me. There's barely any character development and most of the dialogue is pretty cringey, but it's still an extremely fun movie to either watch on HBOMax with the family or go to one of the few open theaters left to socially distance your way through a blockbuster. You should know what you're getting yourself into with "Godzilla vs. Kong" just from the name, so if giant monsters fighting is your thing, then you'll be delighted. If you need all the other stuff like character and motivation and subtext, maybe sit this one out. I'll take your seat.

Godzilla vs. Kong
Dir. Adam Wingard
Grade: B-
Available on HBOMax or at select theaters