First distillery in Redmond is a throwback to the 1920s

When your grandfather survives the Holocaust and goes on to be a badass baker to the who's who of Hollywood stars, including Tom Jones and David Bowie, what do you do? 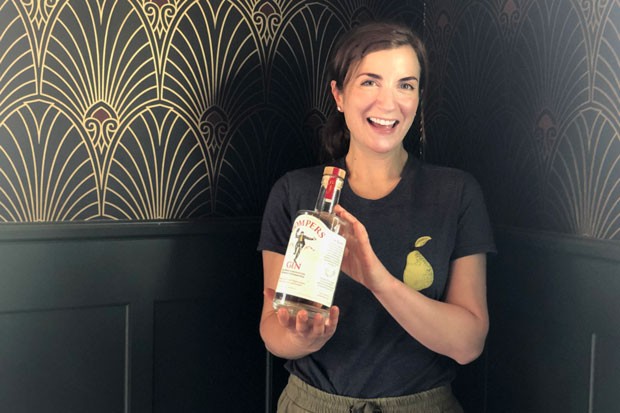 "Don't be ordinary," said Gompers Distillery owner Jessica Hart. "It's the motto we live by." She and her husband Michael have honored Herman Gompers by developing unique spirits and a distillery in his name.

It started when Jessica and Michael Hart, self-proclaimed gin lovers, could not find a gin that was great neat and in cocktails. They had a bar stocked with almost 20 different kinds of gin, and each night they would curate a bottle depending on what they wanted to mix up. That's until they decided to make the gin they wanted to drink. Gompers Gin is made with handpicked Oregon juniper berries with notes of golden pear and lavender. Unlike most gins that make your lips pucker if you try to drink them neat, Gompers Gin is smooth. It's only smoother when they age it in Coeur de Terre Pinot Noir barrels and it turns into Old Tom gin. Barrel-aging adds notes of caramel and Pinot Noir and creates a gin that drinks like a whiskey.

Gompers Gin has been well received. You can find it in liquor stores and restaurants throughout Oregon and Texas—so the couple, with the help of co-owner Jerry Gompers, Jessica's father, decided to open a distillery, the first in Redmond.

With inspiration from the set of "Boardwalk Empire," a period drama set in the Prohibition era, the family has built a distillery and tasting room that makes you feel like you stepped into the 1920s. The handmade wood bar, hand-painted with a giant G, is topped with green leather finished granite, a wooden rail for your elbows and an ornate brass footrest. The walls are covered in decadent geometric Arts and Crafts period wallpaper that changes with the light. A chandelier hangs from the high ceiling and drips with crystals. The Waterman Room, a secret room named after Jessica's grandmother, also a Holocaust survivor, is hidden in the distillery. The Harts told me only Founders Club members have been given the code.

Grab your flapper dress and tux, because everyone is invited to a grand opening Prohibition party on Saturday, April 27. Appetizers, a buffet, classic cocktails with Gompers Gin and a gin-infused cake from Foxtail Bakeshop will be served and entertainment provided by a six-piece jazz band and the Bend Burlesque Company. Guests can play craps, black jack and roulette, with proceeds going to Warfighter Outfitters, a nonprofit benefiting veterans. If you play your cards right, you might just bump into someone who can get you into that secret room.