"Green Book" gets a black mark

They say the road to hell is paved with good intentions. If that's the case, "Green Book" is all up in that infrastructure. The film pokes its head out like a groundhog, so harmless, looking to the audience for approval without stopping to think if it has anything to say. "Green Book" wants to please every single white liberal baby boomer in its auditoriums, happy to preach to a choir as long as everyone is smiling. 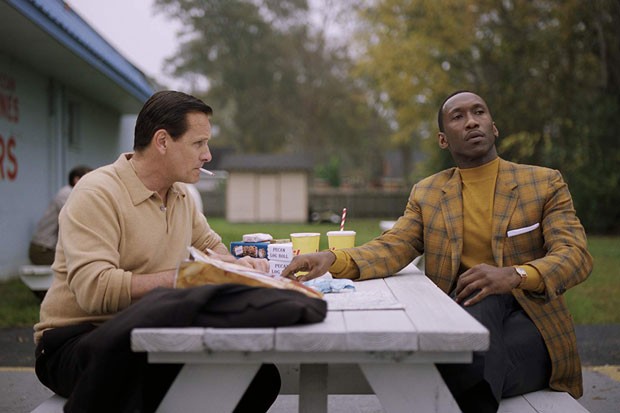 Sadly, that smile is painted on the facade of what is surely an interesting true-life story about an unlikely friendship in a time of bigotry and hatred. Viggo Mortensen plays Tony Lip, an Italian-American bouncer from the Bronx. When his working situation dries up, Tony takes a job driving and protecting Dr. Don Shirley (a masterclass in control from Mahershala Ali), a classically trained pianist heading out on a concert tour of the deep South.

Tony starts off as the kind of guy who sees a pair of African-American workmen using his drinking glasses and shoos them away. But the film can't wait to soft-pedal his racism by saying that he mostly just acted racist around his cartoonishly Italian family. By 30 minutes into the movie, he's devoted to Shirley and they are fast friends.

Ali and Mortensen play beautifully off of one another and that manages to keep the movie moving along the typical Oscar bait-y path all these movies take. There are no real surprises, but the formulaic script still can't suppress the lovely work from the two leads.

Where the film completely falls apart for me isn't in the story itself, but in the way that it's told. The fact that this is another white savior narrative isn't even the most offensive part of the film. What really came across as completely tone deaf to me was the fact that the story is told from Lip's point of view. Lip is a great character, but this is Shirley's story. He's the one who has made a conscious choice to tour a section of the country he won't be welcome in. It's Shirley who has the interesting story to tell, so to tell it from the point of view of the white driver seems asinine.

There are so many different moments of white people taking a beat and then deciding whether to be racist or not that it becomes a running joke. The film doesn't want me to applaud the bravery of Shirley or the friendship of the two men, but instead presents several moments where we're supposed to be overjoyed that people in the South decided NOT to be racist. Oh great, you acted like people. Gold star.

Modern audiences don't need movies normalizing racism while treating the repentant racist like the hero of the tale. "Green Book" is a story of friendship, sure, but Shirley is the remarkable person here, not Lip and his decision to step into the 20th Century. Telling black stories from a white perspective seems like a bad choice, no matter how good the intentions.