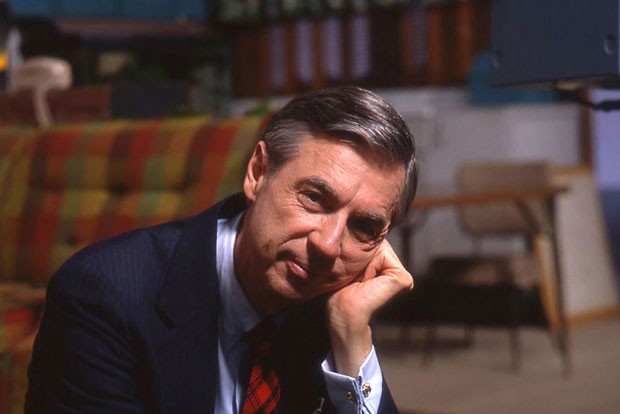 One of my earliest memories was sitting in front of my babysitter (I mean TV) and having Mister Rogers teach me about death. He came home and got into his comfy shoes and happy sweater—but when he went to feed his fish, he found one floating near the bottom of the tank. He wrapped it in a paper towel and took it outside, burying it in the most respectful manner he could.

Mister Rogers didn't just teach me about death. He also showed me how to find my own self-worth, regardless of what bullies were saying. He taught me to always say please and thank you, and to love people with all of my heart and help them see the beauty in themselves. He told me that no matter how I felt and regardless of what anyone said, I was special.

What's beautiful about that last idea is that it's so unpopular in modern times. There's a moment in "Won't You Be My Neighbor?" in which a FOX News talking head bloviates about how dangerous and evil Mister Rogers was for daring to make an entire generation think they were special.

That kind of thinking almost makes it hard to follow the life lessons that Fred Rogers shared for over three decades—that we're all fundamentally good people as long as we have someone in our life that reminds us of the inherent decency we're all born with. People who believe that that kind of self-respect is somehow a negative signify a deep cognitive difference that no amount of empathy will overcome.

"Won't You Be My Neighbor?" is a solid documentary that doesn't really shed any new light on everyone's favorite neighbor, but does humanize Rogers in a way that makes his faults even easier to look past. The man we saw on TV was so close to who the man was off camera that any distinctions are mostly reductive.

There are a few interesting insights that the doc briefly settles upon (like how when he got mad at his kids at the dinner table, he would use the voice of Lady Elaine Fairchilde to express anger), but they're so quickly glossed over that they hardly make an impact. While the film doesn't quite lionize the man, it never shies away from boldly (and rightfully) stating the positive impact he had on millions of children's lives.

Thinking humanity is something to be cherished and protected shouldn't be seen as a sign of weakness. That the feeling of having something beautiful and unique to offer the world is seen as a symbol of entitlement to FOX News and others is deeply disturbing. Who are the real snowflakes here?

More than the film itself, what "Won't You Be My Neighbor?" really excels at is posing the question about whether "Mister Rogers' Neighborhood" could survive in the modern TV landscape. Would his type of gentle nurturing be seen as a sign of weakness to parents in 2018? Would his slow-paced show be lost in an age of dying attention spans? We'll probably never know, since there will never be anyone like him again.