You know when you have so many cigarettes on hand, it feels like you're swimming in a pool of gold like Scrooge McDuck? Well, I don't actually know how either of those things feel. But if you have felt that way, you could call it being "Cig Rich." At least that's the funny term Nathan Tucker and Tim Howe almost named their new band after. Instead, the two went with First Rodeo—another great name for a pair who have actually been collaborating together for years. 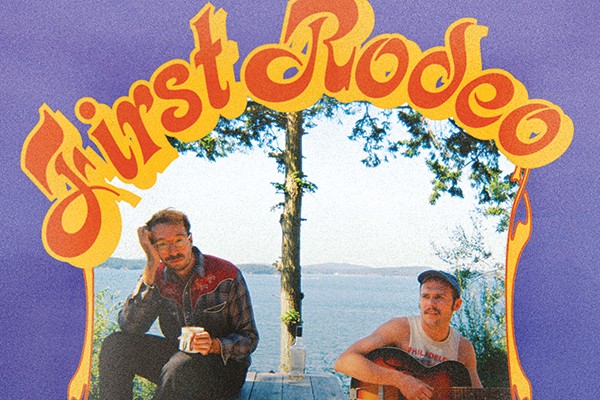 "It just felt like a funny thing to call the seventh band we've been in together," laughs Tucker.

The friends first met at Lewis & Clark College in Portland and continued to play both together and separately in multiple bands for years. Howe, a Bend native who now lives in Portland, and Tucker, who lives in Philadelphia, were finally able to focus on a 50/50 project of their own—and so began the start of First Rodeo.

Now the duo is eager to enjoy the release of their debut album, out on Forged Artifacts Aug. 5. The self-titled record was made through good times spent on island time, in a friend's cabin on Lopez Island in Washington.

"We just loaded my Honda Element with as much gear as we could. Hopped on a ferry and went over there for four days or something," says Howe. "It was just a blast. We wanted it to feel like a chance to record some music, but primarily it was a chance to reconnect and hang out because we live on other sides of the country from each other now. Best-case scenario we walk away with some really cool recordings. Worst-case scenario we get to hang out on Lopez Island with some buds."

The outcome is 10 tracks of comforting, witty and introspective alt-country, spearheaded by both Howe and Tucker's individual styles of writing. The strange thing is that most of these songs were written separately before the pair got to Lopez Island, yet in some beautiful way they all fit together in this life-affirming kaleidoscope of stories brought from the past.

"We had been tossing demos and stuff back and forth for maybe a year at that point. But real slow motion. The demos were pretty bare bones. Most of the details came together up there," says Tucker. "He and I both write pretty regularly. Him even more so than me. Tim is pretty prolific. I'm like, sort-of prolific. Mid-tier prolific. So there's always stuff just floating around."

When it comes to songwriting, Howe is often inspired through moments of place. You really hear this on "Didn't It Rain Last Night," a song set after jumping into Wallowa Lake in Eastern Oregon with clouds hanging overhead. Tucker says he has more of a focus on the small and mundane in his writing—but his descriptions in this light create universal imagery. Take for example this scene he paints on "One Of Those Things." While a specific memory, it feels like our own: "Twenty-five-dollar breakfast, in a diner full of college kids. Wonder who's on scholarships and who can foot the bill. Splittin' up the check with four different colored credit cards." There are plenty of moments on the album that are personal for the duo, but their delivery allows you to feel the importance of each because they tie close to your experiences.

"If there is a theme of this album it's the idea of, like, thinking back on good times with good buds. Which I think is fitting because it was a reunion for us in a lot of ways. Even if we didn't write these songs specifically for the album, I was like this lines up a lot with what Nathan & I have talked about over Zoom, just off-hand. It came about relatively naturally and we didn't force that to happen," says Howe.

The album comes to a close with bittersweet sing-along-ballad, "I Don't Wanna Feel Another Thing," that Tucker wrote before he moved away from Portland. It brings together an ensemble cast of buddies singing their hearts out and you truly feel like you're at your favorite bar with your favorite people, drinking until close. It even features layered recordings from an entirely different party on the coast from that same night, courtesy of Tucker's girlfriend, Georgia.

"That was the best part of the whole trip, for me. All of those ensemble vocals. Andy, our homie who helped engineer and has played in other bands with us, he just set up a mic in the middle of the room while we were all drinking beers," recalls Tucker.

"That was definitely the most island time sh*t we did. If island time is at 3:30 in the morning," laughs Howe.