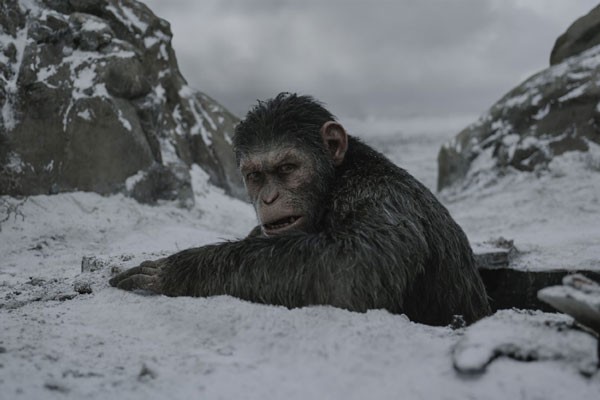 I know you're not going to believe me, but "War for the Planet of the Apes" is a masterpiece. Not a masterpiece in comparison to other summer blockbusters, but compared to other cinematic works of art. Somehow, a movie where 75 percent of the main characters are computer-generated primates speaking in sign language is the most exciting, emotionally brutal and satisfying film I've seen this year.

This is the third (and final?) film in the rebooted "Apes" trilogy, which follows 2011's surprisingly good "Rise of the Planet of the Apes" and 2014's darkly beautiful "Dawn of the Planet of the Apes." I don't have a strong connection to Pierre Boulle's 1963 novel or Charlton Heston's 1968 film, so the fact that this modern retelling has surpassed the source material isn't much of a shock.

Caesar (once again played by the remarkable Andy Serkis) is now the war leader of the remaining simians, but he would prefer to hide out in the forest and let the virus that gave him his intelligence wipe out the rest of humanity. He sends the rest of the apes out to a new territory to live and takes a small group into human territory to kill a sadistic and psychotic army colonel played by Woody Harrelson (channeling his inner Brando).

That's basically it. The film has a very simple story on which to hang some very big ideas that usually don't get covered in our multiplexes. Whether the film is touching on Caesar's choice of what kind of leader he needs to be (noble or bloodthirsty) or on Harrelson's colonel as he forces captured apes to BUILD A WALL TO KEEP OUT HIS ENEMIES, it's always balancing character moments with truly emotional storytelling.

Matt Reeves doesn't shoot the film like he's directing a goofy summer blockbuster; instead his influences shape a movie much more memorable than the usual popcorn garbage. There are shades of Francis Ford Coppola's "Apocalypse Now," David Lean's "Lawrence of Arabia" and Shakespeare's "King Lear" for good measure. There are large stretches of the film with no dialogue at all, content to treat the audience like intelligent moviegoers who can handle looking at visual poetry instead of hearing the half-baked dialogue which normally comes from the typical summer popcorn fare.

Instead of feeling like an homage to better works of art, "War for the Planet of the Apes" manages the much more difficult task of being a lovely and thoughtful social allegory and a heartbreaking look at the cost of war. There's a chimpanzee in "War" named Bad Ape (beautifully played by Steve Zahn) who made me cry more than I felt comfortable with. He used to live in a zoo and thinks that's his name because that's what his keepers called him most of the time. Bad Ape broke my heart a dozen times throughout the film and made me want to break into a zoo and hug some primates. He's a completely CGI creature created with motion capture, and it might be my favorite performance of the year. That's amazing.

"War for the Planet of the Apes" has no right being this good. It has raised the bar not just for summer blockbusters, but for everything coming out across the rest of the year. There's imagery in this that will stay with me the rest of my life and ideas that will change how I look at the world. Pretty good for popcorn entertainment.

War for the Planet of the Apes