The U.S. Forest Service is considering a quota system in the Central Cascades Wilderness areas 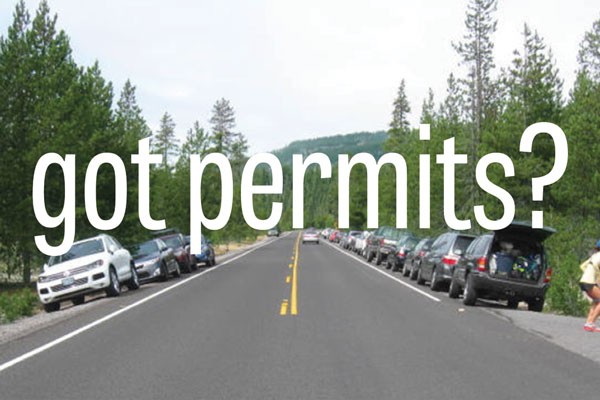 Trying to get into the Green Lakes parking area in the summer is like traveling back in time to August 1969 and finding parking near the Yasgur family farm. Cars lining both sides of the road, dogs and children running around, creating an unsafe situation for motorists and trail users.

If the U.S. Forest Service changes the way hiking and camping is managed in the wilderness area of parts of the Deschutes and Willamette National Forests, some of the Woodstock-style parking stress may be relieved—but so will the option to just grab your boots and go on a day hike.

As a result of that assessment, the Forest Service is proposing an overnight camping quota system for all trailheads in the wilderness areas, and a quota system on all Three Sisters eastside, Highway 242 trailheads and Mt. Jefferson Wilderness west side trailheads.

According to the August 2016 assessment, Tam Rim had nearly 40 overnight users per night and 350 day users per day in July 2016. Green Lakes, one of the most easily accessed trails near Bend, had over 40 overnight users per night in August 2016 and 250 day users per day in July of the same year. Under the proposed permit and quota system, Green Lakes would be limited to 17 overnight groups of up to 12 people per group, per day, and 80 day-use permits per day, according to Beth Peer of the Deschutes National Forest. Tam Rim would be limited to five overnight groups and 80 day use permits per day. Users would buy permits online through Recreation.gov, the contractor the Forest Service is required to use, Peer said.

For people who've lived in Bend for years, blame for the big crowds often gets laid at the feet of newcomers. But a new wrinkle exists, according to the Forest Service: tourism promotion and social media. "The use of social media to promote outdoor recreation and encourage more visitors to particular destinations in not likely to decrease in the coming years," the assessment said.

Visit Bend was created by the Bend City Council to develop and build Bend's tourism industry. Its website is full of beautiful pictures of the town and the surrounding recreational areas. But its staff says they also understand the impact of the growing population, working with the Forest Service to educate visitors and locals on stewardship of the lands. That includes teaching Leave No Trace principles, and avoiding geotagging their photos, according to Nate Wyeth, Visit Bend's vice president of sales and marketing.

Kevney Dugan, Visit Bend's CEO and president, said they even give a copy of Visit Bend's visitors guide to the Forest Service to see if it raises any red flags.

"If they tell us not to use Green Lakes, we won't put it in our visitors guide," Dugan said.

Visit Bend also promotes the "Bend Pledge," an initiative aimed at educating visitors on how to be responsible driving in town and recreating in the outdoors.

In May 2017, the Forest Service mailed out a description of its proposed action to 476 individuals, organizations and agencies, receiving a total of 465 responses. One commenter suggested not putting restrictions on public lands, because citizens have the right to be on public land, and because they pay taxes, it should be free.

When it comes to public lands with wilderness designations, it's not that simple. The Wilderness Act of 1964 created a National Wilderness Preservation System, which gives Congress-designated wilderness areas a "very high level of protection and the Wilderness Act sets these wilderness areas apart from other public lands and establishes a mission objective for the Forest Service to preserve wilderness character." According to the Forest Service, wilderness character has the following qualities: untrammeled, underdeveloped, natural, unconfined recreation and opportunities for solitude.

Ellen Wolf is one local resident concerned about overuse of trails.

"I am in favor of the Forest Service's efforts to protect the Cascades Wilderness and [I] want them to succeed," Wolf told the Source in an email. But, she has concerns about how the Forest Service will manage its efforts. Possible issues could arise with enforcing the permit system, for one.

"Those of us who follow the rules will not be able to hike, while those who don't will continue to hike regardless of whether or not they have a permit," Wolf said.

In the assessment, the Forest Service said the level of enforcement will vary based on fee retention and the ability to increase funding [for enforcement].

Another point of contention is the cost of the permits. As of now, the Forest Service hasn't commented on its plan for the price of permits.

On its website, Oregon Wild, a wildlife and wildland advocacy organization, advocates for setting prices at the absolute bare minimum to avoid pricing the public, at any income level, out of public lands. The organization would also like to see the proposed permit dates changed from May 1 to September 30 to June 1 through Labor Day to minimize the impacts in the so-called shoulder seasons. 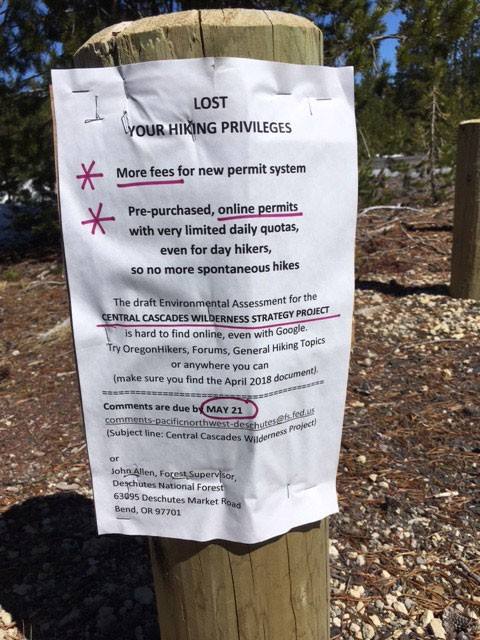 The Forest Service has four other alternatives it's looking at in addition to its proposed plan:

Alternative one: Continue to manage the wilderness areas without change.

Alternative two: The Forest Service's preferred plan would have an overnight camping permit system and a day-use quota system on all Three Sisters eastside, Highway 242 and Mt. Jefferson west side trailheads and self-use free permits with no limits everywhere else.

Alternative three: Focus visitor use management on the very high use trail areas only, such as Green Lakes and Tam Rim.

Alternative four: Similar to three, but also "includes limited entry permits for areas that are gaining in popularity and have a high likelihood of receiving displaced users," according to the assessment.

Alternative five: The most strictly regulated option, which would require limited entry permits wilderness-wide for overnight and day use.

The public comment period ends May 21. Concerned people can email comments-pacificnorthwest-deschutes@fs.fed.us. The subject line should include "Central Cascades Wilderness Project."