Got Your Number | The Leaflet | Bend | The Source Weekly - Bend, Oregon 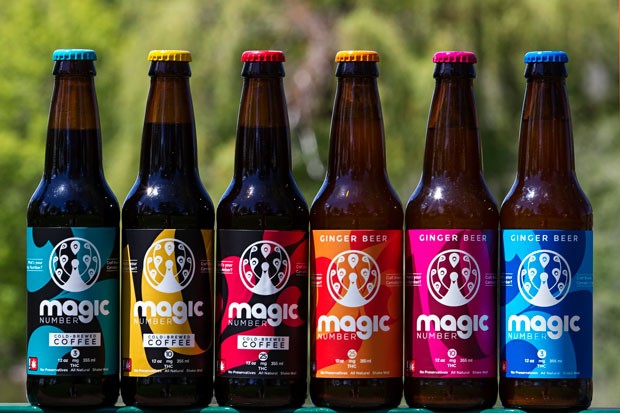 When Alex Berger noticed a lack of infused beverages within the Oregon medical marijuana industry in 2014, he wasted no time co-founding Magic Number. Originally a technical consultant from Cincinnati turned Oregonian, Berger saw the cannabis industry on the verge of recreation legalization and charged the scene. His goal: produce the best craft cannabis-brewed beverages in Oregon—and he and his partners are well on their way to accomplishing this.

Berger set to testing ginger beer flavor profiles and brewing techniques guerilla style in his garage and kitchen. For taste depth in the juicing and syrup steps, he chose zesty organic Peruvian ginger with Jamaican spices including cloves and cayenne.

In order to brew, first he has to render a syrup, including those previously named ingredients plus sugar and water. Then he adds a full-spectrum single source CO2 extract cannabis oil in a proprietary process called emulsion (CO2 extract because it produces a cleaner oil than butane, propane or ethanol). Emulsion is defined as the dispersion of minute droplets of one liquid in another in which it is not soluble.

Once properly mixed, the Magic Number brew is carbonated and left to chill overnight in a Brite Tank. Finally, the crew tests each batch to ensure the milligrams of THC corresponding to the numbered labels 3, 10, 25 and 50 (sky blue, pink, orange and royal blue) are correct.

Though the preparation process may sound like that of any brewed beverage, the legalities of serving it aren't. For starters, there's a 72-ounce volume limit for purchase, so a six pack is the largest quantity available—somewhat illogical, considering the volume isn't necessarily relevant to potency.

In addition, due to cannabis consumption laws, Magic Number's brick and mortar or Canna-brewery on third street can't give tours, samples or sell an open or closed product directly to customers without a dispensary license. In the coming years, Berger is hoping some of the rules will be re-evaluated and manufacturers will be able to open their facilities to the public, sell directly and perform any other business service for the community a microbrewery can. After all, Berger says, "We are essentially a brewery, plus a two-minute process to add the cannabis. It would be great to do growler fills."

With tons of new products in the pipeline, Berger is most excited about increasing CBD ratios in existing ginger beer and cold brew coffee and the release of some top secret flavors.

The Magic Number team believes, "Cannabis beverages are such a new thing—who knows where it's going to go? This is the closest thing we have seen in the way of prohibition in our generation. It's an exciting time to be a part of the cannabis industry."

To see a list of dispensaries where you can find Magic Number, check out: drinkmagicnumber.com/locations.