The fire was first reported on Sunday before spreading to over 4,500 acres

July 13, 2021
comment
The Grandview Fire was first reported on Sunday afternoon and by Tuesday was raging over 4,500 acres of private land protected by the Oregon Department of Forestry and the Crooked River National Grassland which is managed by the U.S. Forest Service. It was visible from Sisters and Redmond on Sunday evening, but it didn’t enter Deschutes County until Tuesday.

On Monday the fire pushed west by an easterly wind and winds later pushed the fire south. Crews placed preliminary containment lines or retardant around most of the fire area 8 miles east of Black Butte and west of Whychus Creek. A task force of fire engines was dispatched to protect structures on Holmes Road and Squaw Creek Canyon Estates. The fire was extremely active and fire crews had to attend to several spot fires and group tree torching  to contain any fire that crossed Whychus Creek.

On Tuesday crews were manning the fire lines, aided by five large air tankers dropping retardant and two helicopters dropping water to cool hot spots. A level 3 (Go Now!) evacuation notice was given for homes north of Holmes Road northeast of Sisters, and a level 2 (get set) notice for Mckenzie Canyon and the Lower Bridge Way area. As of Tuesday the fire was 5% contained. 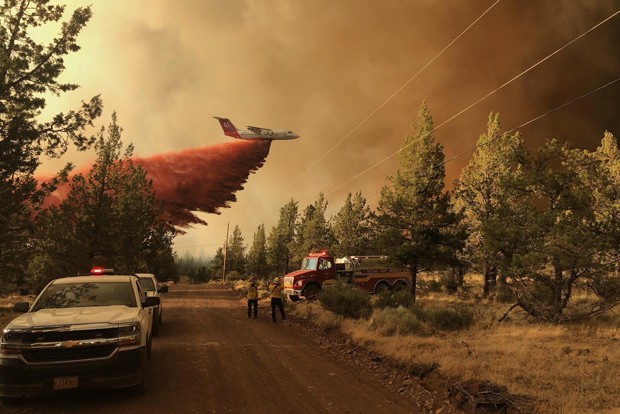 “Fire crews had contacted me and let me know that the fire had jumped Whychus Creek; that particular creek was the buffer for whether or not we were going to increase from a level 1 evacuation to a level 3,” Jefferson County Sheriff Marc Heckathorn said on Monday evening in a Facebook video posted to the Sheriff’s Office’s page. “The concern was that once it got out of Whychus Creek it was really flat land, with a lot of fuel, that fire, if we got a lot of wind, if it was to blow hard and blow east this area would be threatened.”

Heckathorn said the wind calmed down after declaring a level 3 evacuation notice northeast of Sisters, and that the weather was favorable heading into Monday night.

“The weather has been very favorable, the temperature out here has dropped significantly, there’s barely any breeze blowing, so as it stands here at 9:30 at night I feel confident that we’re in a good place, we’re definitely not out of the woods but I like where we’re at compared to what we were a few hours ago,” Heckathorn said.

Gov. Kate Brown invoked the Emergency Conflagration Act to clear the way for the State Fire Marshall to deploy firefighters and equipment to aid local resources. 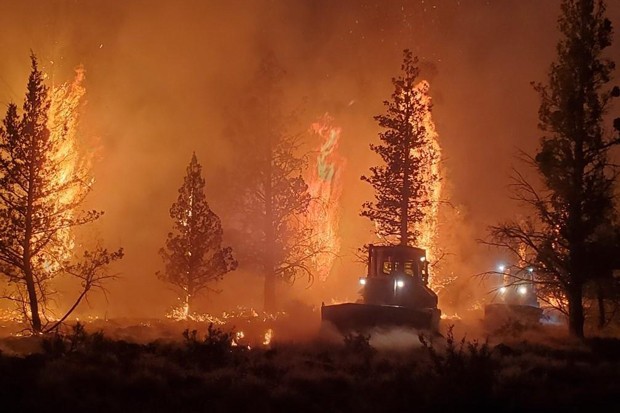 “With several large fires burning throughout Oregon, I want to reiterate how important it is for all Oregonians to be prepared and to remain vigilant about fire prevention, especially with activities that could spark fires," Gov. Brown said.

The cause of the fire is still unknown, but a fire that started around the same time and place, the Newberry Fire, was determined to have been caused by a spark from a chainsaw that ignited firewood while it was being cut, the U.S. Forest Service said. The individual who cut the firewood did so at a legal location and time and stayed in the area for an hour-long fire watch after shutting off the saws. A ban was placed on all firewood cutting and campfires in Central Oregon’s Forest Service and Bureau of Land Management Lands.

The fire hadn’t burned any structures or caused any injury at this story went to press. Winds are expected to get stronger on Wednesday and Thursday, potentially pushing the fire into new areas.