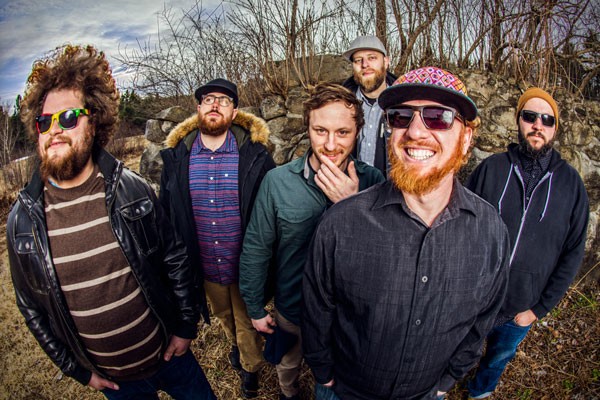 "When I first started playing guitar—I'm 36 now—so when I was 12 or 13, I started to get turned onto jam music from older friends who collected bootlegs of Grateful Dead and Phish shows," Brett Wilson, founding member and lead singer recalls. "I would rewind and fast forward and pick apart the music of the Grateful Dead. At the same time, I was investigating. I was into rock and reggae and ska and metal and everything, and hip-hop. In terms of guitar, I really resonated with his [Jerry Garcia's] voice."

Fast forward past 10 years of touring, when Wilson and Roots of Creation befriended the promoter of Jerry Jam, a festival started the year after the Dead's lead singer, Garcia, passed away.

"We love the Dead in our own style," Wilson says. "From there, we did a Halloween show for him and did a whole set of the Grateful Dead with a reggae vein."

"Little kids like to dance to it. I feel like it's a universal record. Deadheads, reggae fans who haven't delved into the Dead, our fans, so far it's been universally loved. We haven't gotten a lot of hate, but it's still early," Wilson says.

During their current tour, Roots of Creation performs "Grateful Dub" in its entirety, while also peppering in some other songs—fan favorites as well as new interpretations of Grateful Dead material. In addition to an album of new material, the band plans to release "Grateful Dub: Volume 2," in the future.

"The authenticity, I believe, and the rawness of both genres, because I kind of consider the Grateful Dead to be a genre. I just think the authenticity makes the music timeless. And there's so much of it, both genres. The most prolific artists of reggae have put out so much material, it's all so good. The live concerts, it would take you so long to listen to all of the Dead's material. There're so many versions, if you don't like one because it's too slow, you can find another. It's kind of like 'Choose Your Own Adventure,'" he jokes.

"My good friend always says, 'Every day another 12-year-old kid downloads or purchases Bob Marley's 'Legend' and his life is changed," Wilson says. "It's a starting point and then you go from there, you delve into everything. Maybe at some point in time, this ["Grateful Dub"] will serve as a roadmap to both genres."

Roots of Creation can't wait to return to Bend. The band played a free Summer Sunday show at the Les Schwab Amphitheater nearly a decade ago. Their former booking agent also lives here, and many people from New Hampshire, the band's stomping grounds, have relocated to Bend. Wilson looks forward to a reunion of sorts when they arrive.