Gratitude Should be an Everyday Thing | Editorial | Bend | The Source Weekly - Bend, Oregon

Gratitude Should be an Everyday Thing 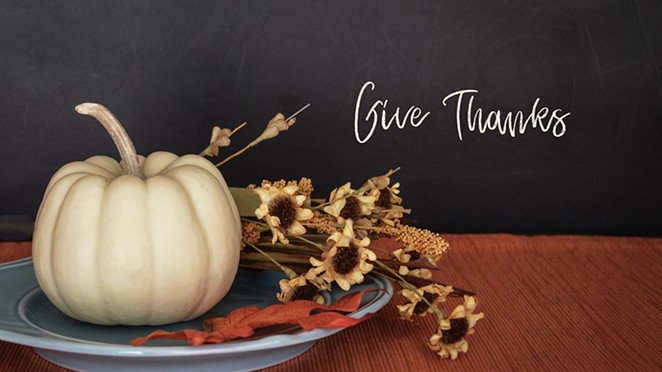 "With Native Americans you do not separate the spiritual from the rest of your life. You're very involved with who you are, where you came from, and where you are going. We have special holidays or festivals, but every day is a day of thanksgiving."

—Gladys Widdiss, elder of the Wampanoag Tribe of Gay Head

The Wampanoag are Native people of modern-day Massachusetts, some of whom are thought to have participated in the first Thanksgiving in 1621. According to the tribe, it's unclear whether the Wampanoag were actually invited to the feast. While we may never know the actual circumstances under which the first Thanksgiving came about, colonists did glean a valuable concept from those events in the 17th century: That of taking pause to give thanks.

Regardless of where you stand on the concept of Thanksgiving, pausing to ponder collectively on gratitude is something worth doing.

This year, as the results of the midterm elections begin to sink in, we turn our gratitude toward the notion of a constantly evolving representative democracy.

Looking back on the advancements in our own electoral process here in Oregon, we have some things to be thankful for. We applaud Oregon's voters for establishing mail-in voting—through Measure 60, a citizen initiative—in 1998. With that, Oregon became the first state in the U.S. to have exclusively mail-in voting. In a climate in which digital voting methods are more easily manipulated, there's gratitude in the foresight Oregonians had back then.

We also offer gratitude for another groundbreaking Oregon law, dubbed the "motor voter law." The law, signed by Gov. Kate Brown in 2015, allows Oregonians to be automatically registered to vote when they get a new driver's license, or renew one. The move registered historically under-represented groups and spurred more of them to vote.

A study cited in a June 2017 story on Oregon Public Broadcasting quoted Reed College political scientist Paul Gronke, who said that automatic registration "led to more voting by ethnic minorities, younger people and those who are low-income and more rural." In the interest of representative democracy, we wager that Oregon has lots to be thankful for in these two moves.

We're also grateful this year to see that another result of Motor Voter, at least in Deschutes County, was a high number of voters voting in a midterm election—elections that historically see low numbers of voters. While not all the victors are ones we supported during our endorsement process, we take comfort in knowing that Oregon's efforts to increase voting have resulted in a more engaged electorate.

During Thanksgiving, it's also not irrelevant to note that some of the hallmarks of our national democracy stem from Native societies. By and large, Native societies relied heavily on strong social bonds, focused more on achieving consensus and less on top-down, dictatorial methods. One of them, the Iroquois Confederacy, also served as inspiration for the U.S. Constitution.

In a story published in The New York Times in 1987, Chief Oren Lyons, an Onondaga and an associate professor of American studies at the State University at Buffalo, reminded readers that Five Nations of the Iroquois lived under a constitution with three main principles: peace, equity or justice and ''the power of the good minds,'' that of the elders over the young.

''If Americans are going to celebrate the anniversary of their Constitution, we figure we had better tell them where the idea came from,'' Lyons said.

Thanksgiving is a time that comes with a host of associations; positive and heart-warming for some; challenging and triggering for others. Still, in keeping with the Wampanoag philosophy, we believe gratitude should be an everyday thing.