Hempcrete offers a non-toxic alternative to other building materials

The hemp industry is budding in Central Oregon. By "hemp," I'm referring to the "sober cousin" of Cannabis sativa—industrial hemp, not marijuana. Drive around the tri-county area and you'll see fields full of lush, dark green industrial hemp plants. Grown for cannabinoids, such as CBD oil, these plants represent the present status of hemp production in the area.

History holds another view of hemp grown in America. 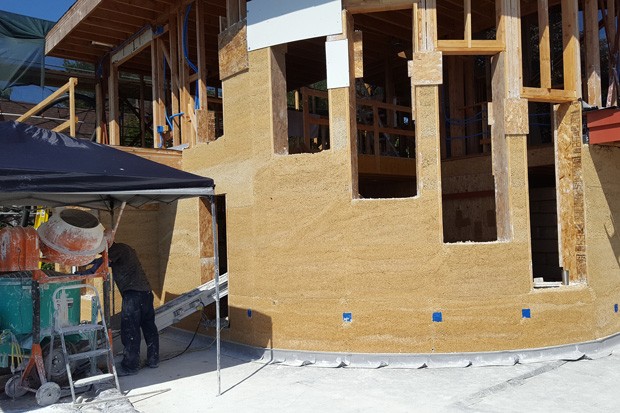 When the first colonists sailed to the New World, they did so on ships with rigging, ropes and sails made of hemp fibers. Hemp advocates like to point out that George Washington and Thomas Jefferson were hemp growers, simply because the long, strong fibers were an excellent source for cordage and cloth. Eventually cotton replaced hemp as a fiber crop. Hemp had a short revival during World War II after the Japanese invaded in the Philippines and Manila hemp was no longer available. "Hemp for Victory" became a U.S. slogan, and farmers in the southeast planted fields of industrial hemp to be made into ship ropes and parachute rigging. After the war, hemp went fallow.

Bearing the moniker, the "Plant of 25,000 uses," it begs the question, "When history and the present connect, what's the future for hemp?" One answer: hempitecture.

Hempitecture is just that: hemp-infused architecture. One of the byproducts of industrial hemp is the processing of the inner woody core into smaller bits known as either "hemp hurd" or "shives." The decortication process, which removes the fibers from the woody core, is either a labor-intensive process or done with expensive machinery. The processing can impact the efficacy of the hurd, so this is an important step. The broken-down hurd can then be made into a variety of products, from paper to animal bedding to construction material such as hempcrete. 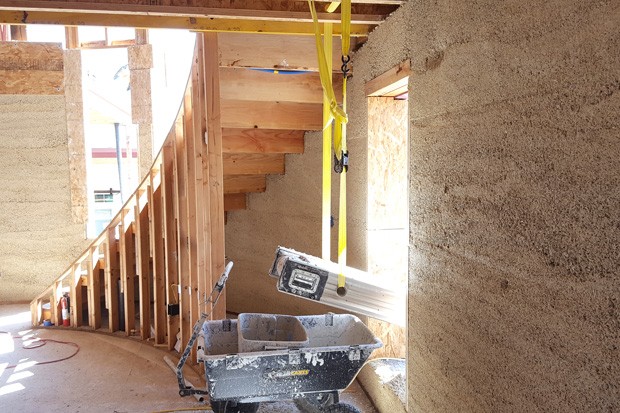 "Hempcrete takes the place of fiberglass insulation and also acts as a thermal barrier to increase a building's energy efficiency," said Chris Sullivan, plant technician with Lazarus Naturals in Powell Butte and hempcrete advocate. The "concrete" reference is because the hempcrete is mixed like concrete, but is a non-load bearing biocomposite used for insulation. Sullivan lists some of the other attributes of hempcrete: mold and pest resistant, hypo-allergenic, fire-resistant, non-toxic and a renewable resource.

Hempcrete is made by mixing hemp hurds with a lime binder and water in a portable cement mixer. The resultant bioaggregate material is light and airy. The hempcrete is then packed and tamped down between temporary plywood sheets attached to stud walls (shuttering, for you builders out there). After the hempcrete dries, the forms are moved upward to accept the next layer. The final wall may be covered with a plaster, instead of drywall, or left alone, depending upon building codes.

One of the byproducts of industrial hemp is the processing of the inner woody core into smaller bits known as either “hemp hurd” or “shives.” The broken-down hurd can then be made into a variety of products, from paper to animal bedding to construction material such as hempcrete. tweet this

Another advocate of hempcrete construction is La Pine-based master carpenter Joey Santavicca and his wife, Diana Forsberg. They own Family 1st Building and Remodeling, and Santavicca is also a hempcrete contractor.

"We put your family first and develop non-toxic solutions for building and remodeling projects," said Santavicca. "Hempcrete is great for those with chemical sensitivities." With a myriad of toxins found in modern construction materials, Santavicca is excited to start building with hempcrete and to help homeowners navigate through the building approval process. 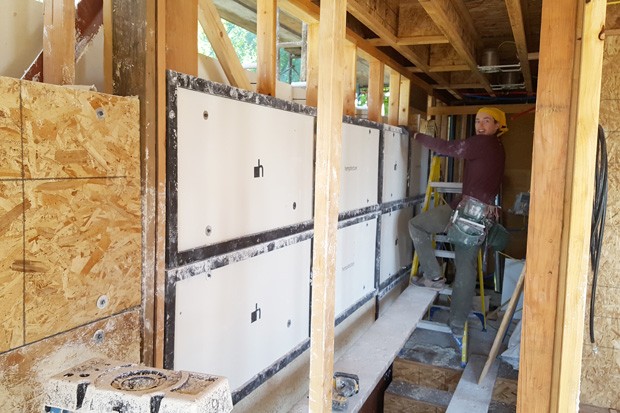 According to Deschutes County Building Official Randy Scheid, the county has not yet seen a proposal for utilizing hempcrete in a remodel or new construction. Building regulations don't prevent the use or design of materials not defined in the code as long as that material, design or method of construction is approved prior to building. Since hempcrete buildings have already been approved and built throughout the world and in parts of the U.S., a historical opportunity awaits in Deschutes County.

Another beneficial aspect of the hemp building industry is there's always room for innovation and new products. Hemp batting, hemp blocks, structural laminates, countertops, pressboard... the list isn't confined to just hempcrete. Some innovations come from Canada, Europe, China, Russia, or Australia, where the hemp industry is way ahead of the U.S. renaissance.

"Moving ahead and creating an industry here, we have to have standards for testing and grading like the timber industry has," said Barrett Dash, Central Oregon Hemp Association board member and optimization director for Omnibudsman Enterprises. Drawing from agricultural business models from the Midwest or the Dakotas to establish a potential cooperative that would benefit those involved with post-harvesting or post-production facilities and sharing equipment is a platform COHA is working on. "That's a way bigger conversation," said Dash—and is maybe one to have while the hempcrete cures.