Hindrances to bringing hemp to market in the High Desert

After the obstacle course of legislative hoops and cultivation balance beams that Oregon industrial hemp farmers have already maneuvered, this summer’s unseasonable hailstorm along the Deschutes River corridor, just north of Bend, was a disheartening blow. Flower, leaf and stock were pelted into debris until wiry branches were all that remained. 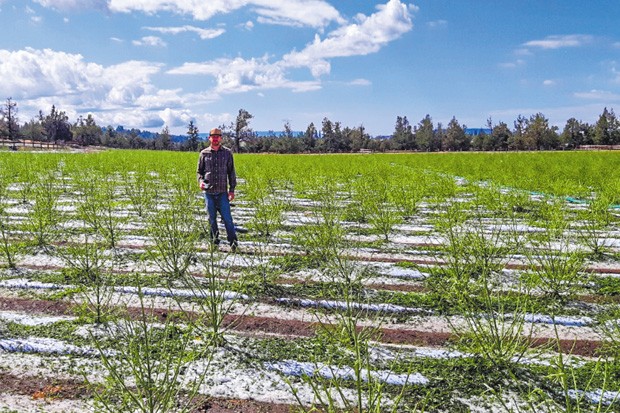 At Kaleb Kelleher’s 35 acres, at Wild Hemp Co. in Tumalo, the result of that 15-minute storm pushed back his harvest two weeks, into October. Kelleher likened the incident to a non-stop shotgun blast, with dime-to-golf-ball-sized shrapnel hammering his less-than-mature hemp plants. He expects a 30 to 40-percent reduction in overall yield.

The 2014 Farm Bill allowed for experimental hemp research, and the 2018 Farm Bill meant private industrial farmers could legally grow and manufacture hemp. Since those bills, inclement weather has been just one of the challenges for farmers in getting their product to market.

Assuming compliance with the two farm bills, and licensure from Oregon’s state agriculture department, Oregon industrial hemp farmers face plenty of other red tape. Below are five big hurdles that can challenge hemp production in the region—a region many agree is poised to become the nation’s transcontinental CBD gravy train.

Reap what you sow

With innumerable strands and infinite desirable qualities farmers can grow for, researchers estimate over 25,000 uses for hemp. To amplify certain attributes, plants require different management plans. Fertilizer, spacing and timing in harvest are just some considerations. For a majority of the 50,000 acres of hemp grown this year in Oregon, enhancing CBD has been the focus.

“Farmers really have to do their homework to optimize their plants,” said Jason Baynes, a local hemp farmer.

For a majority of the 50,000 acres of hemp grown this year in Oregon, enhancing CBD has been the focus. tweet this

The 2018 Farm Bill clarified that it was illegal for authorities to stop hemp from crossing state lines. Though this language is still being interpreted by lawyers, legally, the United States Post Office can ship CBD and hemp products which meet the 2018 bill requirements. In addition, when flying, the Transportation Security Administration shouldn’t hassle consumers.

When water is in short supply, hemp growers utilize water rights, often delivered through a network of canals. During a 104-degree multi-week heatwave last season, that water got shut off at Baynes’ farm. Though the shutoff was found to be a mistake, incidents like this can cause irreversible damage.

All about the Benjamin$

Although selling CBD products online is legal, it’s easier to purchase them off the shelf. Most merchant servers are Federal Deposit Insurance Corp.-backed, which has created complications in processing payments digitally. In May, Jelena McWilliams, head of the FDIC explained, “There is a lot of uncertainty in this space … because of state and federal laws differing on marijuana versus hemp throughout the United States. She added that a 2014 memo from the U.S. Financial Crimes Enforcement Network already gives lenders (and merchant servers) “a clear path for banks” to serve both hemp and marijuana clients.

Initially, Elevon, a merchant server, processed credit payments for CBD products. But Elevon backed out of the market over the aforementioned complications, which put many sellers out of business. Desert Green started online sales by way of e-checks, a somewhat complicated way to process payments that most buyers aren’t familiar with. Currently, some larger merchant services are starting beta-stage credit card services—with referrals from other reputable businesses. Payment processing red tape could be cut faster than a splif can be lit if implementation of the Safe Banking Act, which passed the U.S. House in September, is fast-tracked.

According to the U.S. Department of Agriculture, it’s legal to grow hemp. However, many other agencies are involved. The Food and Drug Administration is very focused on the CBD compound itself and has issued the following statement: “FDA recognizes the potential opportunities that cannabis or cannabis-derived compounds may offer and acknowledges the significant interest in these possibilities. However, FDA is aware that some companies are marketing products containing cannabis and cannabis-derived compounds in ways that violate the Federal Food, Drug and Cosmetic Act and that may put the health and safety of consumers at risk.” Oregon’s main hemp regulatory body is the Oregon Department of Agriculture. Eventually, each state will decide regulation for themselves and chain of command within a federally mandated compliance framework. Until then, it’s legal to sell to all states, but it’s still not legal to have CBD products in all states. For example, CBD oil is still considered marijuana in Nebraska, and law enforcement has been hostile to businesses selling it, even after the 2018 Farm Bill passed.

With so many hurdles to a budding industry, collaboration is key.

“Our biggest challenge is an unregulated market,” explains Baynes. “I spend a lot of time negotiating price. For example, if you grow corn, it’s pretty locked in; you can follow a market chart. There’s much more flux in the CBD market—extreme ebb and flow. The amount of money changing hands makes it a volatile industry. There’s so much negotiating as to what something is worth.” Hence, ongoing comparisons to 19th-Century petroleum and gold rush commerce.

Baynes is a proponent of creating a coalition of CBD farmers to help growers get a fair price for product. He’s already started reaching out to farms, including ones so small they aren’t yet branded. “All the farms look out for each other. I do a lot of hustling and brokering. I reach out to them or they find me on Instagram or RAW HEMP marketplace or Hempexchange.com.”

Bayne’s farm, Pacific Crest Botanicals, and Sarahlee Lawrence of Rainshadow Organics teamed up to form Desert Green Enterprises, a seed-to-table, nearly fully integrated, Central Oregon-based CBD product company. For them, collaborating has made tackling the many hurdles of the burgeoning, prohibition hold-over CBD industry a relay race instead of a marathon.

Kelleher said his post-hail photos have traveled far and wide, sparking other farmers to offer him help with discounted seeds and seedlings.

“At a cost he incurred, Sykes Mitchell at Big Top Farms brought two tractors over and sprayed an enriching B vitamin-based regrowth product twice on my plants. It was super generous, and I owe him a debt of gratitude. The hailstorm definitely brought farmers together.”

If the region’s goal is to be the epicenter of the emerging CBD industry for centuries to come, the success of every farm along the gravy train matters.