As pedestrians and cyclists are being hit by cars in near-record numbers, some say Bend's Neighborhood Greenways program is welcome—but doesn't go far enough

Phase one of a project aimed at making some streets safer for Bend pedestrians and cyclists will start this month. At its March 20 meeting, the Bend City Council voted unanimously to authorize Big Schatz Construction to build phase one of the Neighborhood Greenways project—a four-phase project that addresses the 2017 Council's Goal Number 2: to "Move people and products around Bend efficiently, safely and reliably."

The City has a $900,000 budget for the entire project that aims to provide safer connections, reduce cut-through traffic and speed, help people cross busier streets and guide and help people get to their destinations while walking or riding bikes.

Sherry Jako, an experienced cyclist who lives near the 6th Street Greenway, said she doesn't think the near-million the City has set aside for the project is enough to make Bend a more bike-friendly city.

"While this is a start to implementing changes, this doesn't solve the many streets in our district that lack continuous sidewalks, safer walkways for pedestrians and safer bike routes," Jako told the Source.

"While providing a neighborhood greenway on a quiet residential street—6th Street—is a positive, this does not solve cyclists' being able to access business along the busy artery of 3rd Street," Jako continued. "We need connected bike routes that are safer routes to schools, places of employment and businesses."

Jako believes building the routes will promote cycling, but more focus needs to go on driver behavior on nearby streets. "I also think adjacent streets to the Neighborhood Greenways need the buffer of speed bumps to slow the speed of cars down for additional safety as cars approach the Greenways."

Phase one is slated to start about April 17 and finish about June 1, according to Rory Rowan, project engineer for the City of Bend. It will add speed humps, other traffic calming efforts and enhanced signage at busy intersections on Northeast 6th Street between Greenwood Avenue and Butler Market Road (deviating from 6th to connecting streets where 6th Street dead-ends) as well as Northwest 15th Street from Simpson Avenue to Galveston Avenue.

"Commute Options is excited about this," Jeff Monson, executive director for Commute Options told the Source. "I think it's a great way that the City is showing that they want to encourage more people to bike and walk and to make it safe for people biking and walking and riding the bus, too."

Meanwhile, this session, the Oregon Legislature has at least one bill aimed at fostering safer streets for cyclists.

In November of 2017, a Johnathan Chase Adams was killed when he was run over by a package delivery truck while riding his bike at the intersection of Wall Street and Olney Avenue. Police didn't cite the driver—though District Attorney John Hummel did six months later. Still, Deschutes County Circuit Court Judge A. Michael Adler threw out that citation, ruling he saw "no authority" to support the contention that bike lanes continue through intersections in Oregon.

According to the Governors Highway Safety Association—whose members include state highway safety offices of the 50 states—in 2018, 6,227 pedestrians died in traffic accidents across the U.S., the highest number in 30 years. In 2016, the National Highway Traffic Safety Administration's statistics show 840 cyclists were killed, the highest number in a 10-year period.

House Bill 2682, sponsored by Reps. Rob Nosse (D-Portland) and Sheri Schouten (D-Beaverton) would amend the current statute relating to bike lanes in Oregon by adding the provision, "where the markings of a bicycle lane are interrupted by an intersection, the bicycle lane continues in and through the intersection." It would effectively close the loophole that caused Judge Adler to throw out the citation for failure to yield.

HB 2682 was introduced, had its first reading and was referred to Transportation in January. The bill had a public hearing March 27.

"It's like the giant ship of Oregon Department of Transportation is shifting and they're doing a lot of bike, walk and bus projects," Monson said. "And years ago it was like people would say, 'Why am I even at this transportation meeting?' And now every meeting I go to is talking a lot about biking, walking and transit."

According to the League of American Bicyclists—founded in 1880 as a membership organization that promotes cycling for fun, fitness and transportation—about 5 million people in the U.S. commuted to work either by bike or walking in 2016.

"The benefits of walking and biking are numerous: saving money, you don't have to find a parking space, health and you get some good exercise and don't burn fossil fuels," Monson said. "Reducing traffic congestion, and if you're with kids, they get to look around and see the neighborhood and enjoy their walk to school and feel better once they get to school—and do better in school." 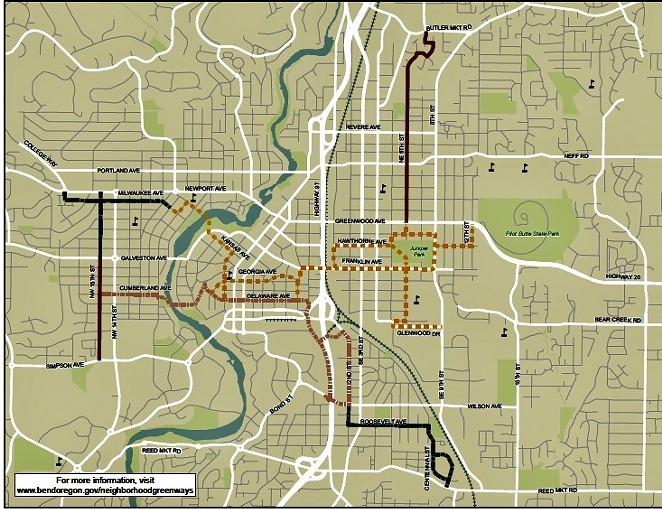 Meanwhile, Rowan, the project engineer, said the City will start design on phases two and three of the Greenways project this year, with construction on those phases happening in 2020. Phase four will be designed in 2020 and constructed in 2021, as funding allows. In 2016, an initial network of Greenway routes were included in the City's urban growth boundary expansion plan. In the summer of 2017, the $900,000 was approved for the project. Rowan said the design started in February 2018, but sidewalk and transportation safety projects pushed back completion of the design until the fall of last year.

When the Greenways are completed, people will be able to actively commute from as far north as Butler Market Road, east from 12th Street and Greenwood Avenue, South from Roosevelt Avenue and west from 15th Street to downtown—all on safer streets.

Rowan said the City will have public outreach opportunities throughout the project's span.