'Grounded' worth a fresh look

George Brant's thought-provoking play, "Grounded," is back for a second and more complete performance at 2nd Street Theater this weekend, after enjoying a popular run as a black-box production by the Cascades Theatrical Company last season. 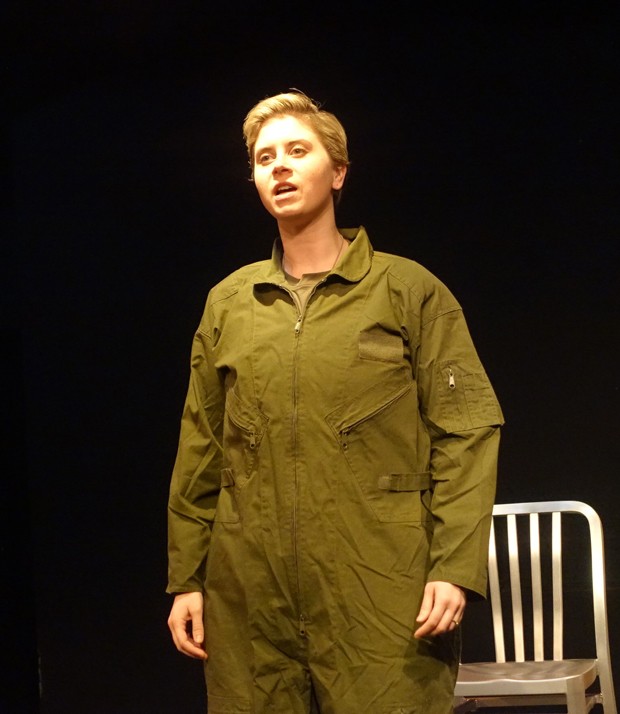 When Director Lilli Ann Linford-Foreman brought the one-woman show to life at CTC last year, she says it was so well received and well attended—especially for a black box production—that she couldn't wait to bring it back.

"It was done with very little technical support," Foreman says of the show's first iteration. It was such a hit, though, the director made the rare decision to purchase the play's minimal set. Almost immediately after the show closed at CTC, Sandy Klein of Stage Right Productions approached her about bringing the show to 2nd Street.

"Usually when I do a show," says actor Kit Foreman—now reprising the role at 2nd Street— "by closing night, I'm done with a character. I'm ready to let it go. This is the first time that I have ever reached closing night and thought, 'I'm not done yet.'"

"Grounded" follows a U.S. Air Force major ("The Pilot") who flies combat missions over Afghanistan. "It's not based on one true story," the director explains, "but it is based on a number of true stories by people who experienced it first-hand."

After a three-year leave of absence to care for her new baby, the pilot and her husband decide it's time for her to fly again.

"She just has to go back," Linford-Foreman explains. "Being a pilot is so much of her." At the time she re-ups, however, she doesn't realize she'll be assigned to something entirely different.

"So she's grounded from her F-16 duties," Foreman says. "They don't send her back to Afghanistan. They send her to Nevada. To fly drones from an air-conditioned trailer.

"She doesn't know that's going to happen when she signs up," the director adds. "This is at the beginning of the drone program. Before I think the military really knew how much stress, how much potential for PTSD the pilots were going to be experiencing." The director wasn't able to reveal much more without spoiling it, but she did say the pilot's personal, moral conflict becomes central to the plot.

"She has a three-year-old daughter at home, and a husband. So the play centers around that conflict, of adjusting to life away from the action but still being 'down range'—that's what being deployed is called. To being a first-time mom while trying to balance working 12-hour shifts, seven days a week," Foreman says.

"You see it all by video," Linford-Foreman says of the moral aspect. "So you see who you're killing. You also see how good – and how not good – the video surveillance is, and you're making judgment calls. It becomes increasingly clear that morally, there's something amiss. And she just can't reconcile it."

The script for "Grounded" is written in open verse, which presents a tremendous challenge for an actor.

"It's a challenge to take it apart and find the sentences, find the phrases," the director says.

"And having it sound like a person telling her story," the director adds. "It doesn't sound like recited poetry."

An audience talk-back will take place after the second Sunday matinee, Jan. 20. Veteran's Mental Health Counselor Kristin Gyford will facilitate the session along with the actor and director. "This is a difficult play," Foreman says. "It's difficult subject material. Our experience at CTC was that people were spending a lot of time after the play talking about it. People had a lot to say."

A portion of ticket sales will be donated to Central Oregon Veterans Ranch.