Gung Ho for Jake the Human

Local comedian Jake Woodmansee is primed to perform three days in a row with comedy sets at Open Space Event Studios this weekend. Woodmansee has performed comedy for over 20 years, and will return to a familiar stage at Open Space, where he did theater performances there when it was still Second Street Theater. Each night has a different theme and the sets will all be filmed for the comedian's upcoming special. Be prepared to potentially see yourself on the screen in the future, especially if attending all three nights! 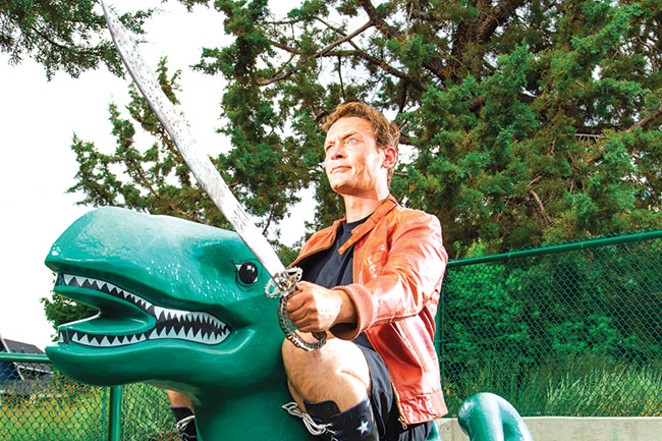 Everyone has that friend who can capture a dinner party's attention with their stories and keep the entertainment going all night. Jake is that human, and he will captivate the live audience with this set of completely true stories.

This isn't a regular improv show. Agro Hippies takes the musical talents of Steven Whitney and the quick wit built through decades of stage experience from Woodmansee to deliver a show that can only be experienced live for its true essence. The audience will toss out suggestions and Woodmansee must create a performance from these, paired with music he hasn't heard before. If he's unable to make up an act he owes the suggester a drink.

Night 3: A Knight of Comedy

All right, no more shenanigans. Well, maybe some. Woodmansee concludes the weekend with a traditional comedy set, but with the antics of Woodmansee, who knows what that will bring.

Throughout the weekend Tylor Jones will perform, with a bunch of friends and guests getting on stage, too. Audiences will need to sign a consent form for filming purposes. Each night is $20 admission, with a weekend pass being $50 which can be shared among friends.