The nice-guy comedian plays the amphitheater

He has seen his great aunt and uncle get into a fist fight at a wedding. His dad was a professional clown turned magician. He is a die-hard Vanderbilt Commodores fan and a true Tennesse Kid. Ladies and gentlemen, welcome to Hayden Homes Amphitheater for Nate Bargatze!

Bargatze has been described as one of the nicest people in comedy. His acts are kept generally clean (his last Netflix special “Greatest Average American” had a TV rating of TV-G, and the one before that, “Tennessee Kid,” rated TV-PG). An act this clean for a headlining comedian is a rare sight, and having an act as crisp and refined as Bargatze’s without using profanity is almost mind boggling. 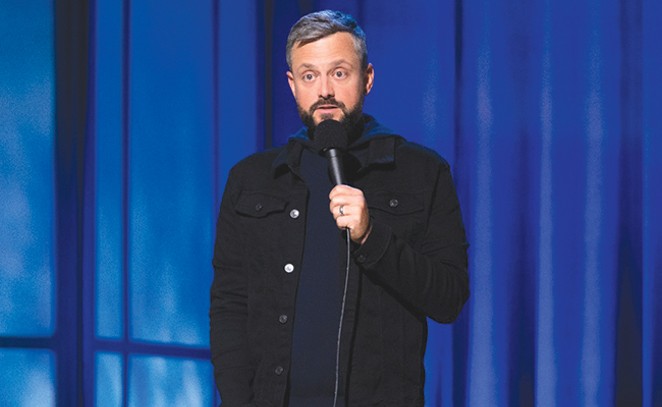 Some have described Bargatze’s act as calming. He is deadpan and navigates his way through his topics and jokes with a sarcasm and unpretentious dry wit that feels almost conversational. Watching a Bargatze special feels like floating down the lazy river listening to your uncle crack harmless jokes that he knows the whole family will love.

His rise in the comedy world had been progressing for the last 10 years or so. He was one of the first comedians to appear on “The Tonight Show” with Jimmy Fallon, and has made countless appearances on the rotation of late-night shows since. His tours have seen sold out shows and festival performances.

He will be the first comedy act to roll through Hayden Homes, and no better comedian comes to mind to sit back in the sun, enjoy a beer or two and laugh the rest of the night away with. Audiences can expect a non-offensive show that encourages the simple concept of just having a good time laughing with your buddies.