Named after the performing clowns of the 17th Century, these ducks make a splash

Ya' just have to admit, those Harlequin drakes are a showpiece. They look like they were posing for Roy Low when he found them all ganged up on the rocks on the Southern Oregon Coast, enjoying the crashing surf.

Harlequin ducks can be found all winter hanging out along the Oregon Coast, on the western side of the North American continent, and also along the coast of Maine on the other side of our good old U.S. of A. 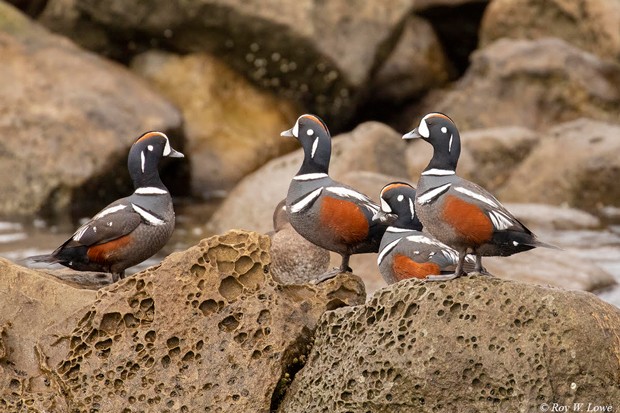 Their names relate to their unique feather pattern that resembles Harlequin clowns of the 17th Century who performed in Europe and the United Kingdom.

Speaking of which, Harlequin ducks leave the coast during mating season and get down to business inland, along the banks of the coastal streams. The drakes are anything but quiet retiring ducks; their unduck-like squeaks can be heard long distances from their nest sites, which has given them another name — "Sea Mouse."

Related Moving With the Sun: Monarch butterflies' long trip south and back again

Moving With the Sun: Monarch butterflies' long trip south and back again
Snow Geese & MonarchsThis is it, Good People, the time when Mother Nature's Children mustobey the Sun. Whether it be Monarch butterflies, Snow Geese,hummingbirds, night hawks, plovers, whales or Flammulated Owls, theycan not stop themselves from obeying the Call of the Sun. Even humanSnowbirds traveling south in their gas-guzzling Mini-Winnies must obeythe call of our Sun.Way back, when most of you were just a gleam inyour daddy's eye - and for some, even before that - I was aduck-hunter. Yes, I do love to eat mallards and geese. EveryThanksgiving I would head off for Summer Lake to shoot snow geese, andCrane Prairie Reservoir for Canada Geese and mallards. (When Idiscovered I was killing families of Canada Geese and leaving orphans,I realized the error of my ways and quit.)It was the discoveryof Russian bands on snow geese harvested at Summer Lake, however, thatalso gave me further insight on the migration of birds. At the sametime, some of the pin-tail ducks I killed were also wearing bands
By Jim Anderson
Natural World

...and before I forget it, the scientific name for the Harlequin Duck is as unique as they are, Genus: Histrionicus, and Species: Histrionicus, named for the "actors, and lords and ladies" they're supposed to resemble.

According to notes on the Cornell Lab's birding website, Harlequin ducks suffer more broken bones than any other waterfowl species. Rehabbing lab x-rays and museum specimens have determined that most adults live with multiple healed fractures; it's just part of their everyday life.

And, the oldest recorded Harlequin duck is a male of 20 years and nine months, seen in British Columbia and identified by its band in 2014, having been banded in Alberta in 1995.

Harlequin ducks leave the coast during mating season and get down to business inland, along the banks of the coastal streams. tweet this

And that, Dear Readers, is just one of the facts we have learned from banding birds. Take the Laysan Albatross for example. They are known to live anywhere from 12 to 40 years. But, "Wisdom," an albatross known to scientists so well they gave it that name, has been going strong for almost 70 years, and for any bird, that's remarkable!

Which prompts me, under the heading of "unsolicited advice," to send you to Cornell's website: allaboutbirds.org/guide overview, where you will find lots of bird hints that will make you and your birding days happier.

And then, if you're just getting started birding, and you have one of those newfangled cell phones and would like to get in on birding's newest perks, download Cornell's free Merlin app. Not only will you be able to listen to—and begin to understand—the whole wonderful world of birds, but you can listen to male Harlequin ducks as they shout to their mates, "Here I come, honey!" or, the other, more sinister, shout, "Get outta' here, she's mine!"

I have a hunch you'd like me to tell you right where to go on the Coast to see those beautiful Harlequin drakes, but they may already be up on the Santiam River, where Sue and I have seen them, or other inland streams and rivers, getting ready to raise new Harlequins.

However, that said, here's a rough idea of where Roy was when he shot that gorgeous photo of those Harlequins posing for their lady-loves: "Today, I counted Harlequin Ducks at high tide at Yaquina Bay. The area was the south jetty from the bridge to the finger jetty at the west end of the gull puddle parking area. I got an accurate count of 45 birds, a new high count for me. It's possible additional birds could have been located further west along the south jetty or along the north jetty."

I should also mention that if you are along one of the inland streams and happen to come upon a pair of Harlequin ducks looking for a nesting site, stay back away from them and just watch. It's the female who picks the site, and it could be on a cliff overlooking the stream, or in a big tree cavity... who knows what she'll settle on. The ducks enjoy each other's company so well, that once a pair is formed, it can be for life.

Related A Huntin' We Will Not Go: A reflection on legal and illegal hunting

A Huntin' We Will Not Go: A reflection on legal and illegal hunting
This fall, while eating supper on the back deck, my wife, Sue said, "Listen," which to a person like me who's deaf as a post, means nothing. What she saw when she looked toward the sound were hundreds of white-fronted Geese heading south, which is a reminder that waterfowl hunting season is just around the corner, and I recall all too well the last time I got going on hunting at Hatfield Lake.
By Jim Anderson
Natural World