Summer wandering is calling. But when time is short, let these three local-ish motorcycle rides give you some bite-sized adventure

A couple of weeks ago, my fairy godmother unearthed my hibernating motorcycle and got her purring like a fat cat. Who knew all it would take was draining and replacing fluids? This summertime transportation development has jump-started my relationship with Little Red Riding Hood, my '77 Kawasaki, dual-sport KL250. 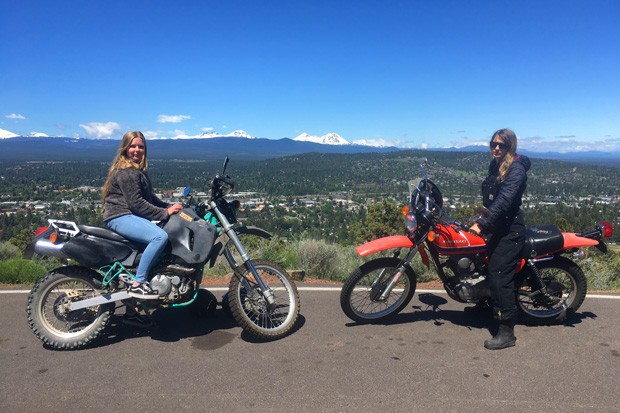 When you need a dose of adventure, but don't have much time, here are some local moto-recommendations.

Besides an incredible in-town 360-degree scenic view and the opportunity for an Insta-worthy photoshoot, Pilot Butte is a super fun ride. It was also the celebratory maiden voyage for my kid brother and his '95 Kawasaki, dual-sport KRX650, dubbed the Big Bad Wolf.

Word to the wise: keep it in second gear as a governor, because there are other vehicles on this steep ride and high crash potential. The bumpy, somewhat unkept and curvy last 400 yards are a real treat. Parking spots for standard-sized vehicles are typically filled, but you'll have no problem sneaking into a sliver-sized gap with your moto. 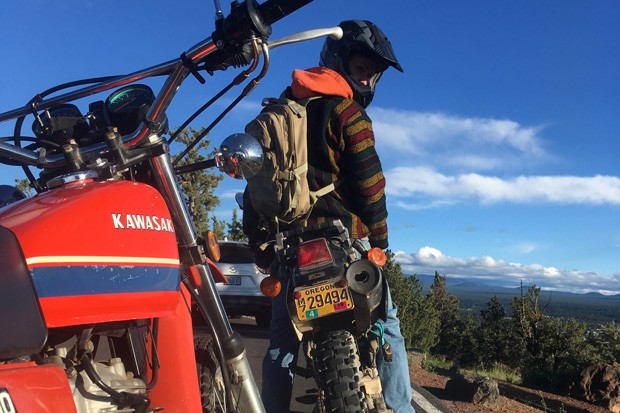 The "Rough Road" signs don't quite capture the gravity of the body-sized, sneaker potholes sporadically scattered over the pavement of China Hat Road. The unpaved crushed rock turn-off at Bessie Butte trains one in the art of fishtailing and helps one recall why it's called a dirt bike, not a gravel bike.

China Hat Road is a variable smorgasbord of off-road, choose-your-own-adventure style, ATV beast mode options—tight trails, mostly abandoned roads, hidden lava tubes, mountain views, blooming monkey flower and firearms ringing in the distance. In this scene that sometimes evokes the movie "Deliverance," you're likely to catch a glimpse of the rural OG Bendite in his native habitat. Beyond Bessie Butte, at some unmarked point, the rider finds they have exited Bend's backyard via a secret passageway vortex and entered the heart of Newberry National Volcanic Monument.

Pre- or post-ride, stop at Deschutes River Market for a snack and a premium, no-ethanol top-off.

The key to an all-day ride is setting up lots of break points. To make the 80+ mile trip to the Metolius River and back, I packed a bag with several layers, a water bottle and my registration and insurance information.

The first break: The Bite in Tumalo, where I gobbled a cheeseburger and kombucha. Increasing inversely with the temperature, people burn a lot of calories riding, so be sure to fuel up.

En route to Sisters, I learned about shaky moto mirrors. The rearview mirrors on my bike vibrated so incessantly at highway speeds, it caused an optical illusion. Multiple times I mistook tailing vehicles' shaky bluish windshield reflection as being lit up by the cops.

The second break: Sisters Coffee. After a green tea, I re-mounted and made it all the way to the Camp Sherman RV station.

The handful of miles between the Highway 20 turnoff and the Camp Sherman Store include Central Oregon homestead-quality ambiance. An itty-bitty schoolhouse, fire station and residences line the road, as do green meadows and pine forests. In late spring, riders won't have to look far to observe lupine, desert paintbrush, arrowroot and columbine.

Though the sky was bemoaning tall-tale signs of rain, I made it (dry) to the headwaters of the Metolius River, a side trip which allowed for several miles on a packed dirt road with comparatively minimal gravel.

Enroute home, I stopped in Sisters again—this time at the Space Age for a refuel of Plus, with no ethanol. Then I sidled up to Three Creeks Brewery for a refuel of pulled pork nachos.

The ride home was full of lessons the hard way. I'd gambled not hoofing it home faster with the looming dark clouds. At first, I thought the bits of material hitting my exposed face were the shattering bodies of arthropods. Eventually, seeing the pooling water on the road, I deduced precipitation. The sensation of sharp metal on my cheeks and nose turned out to be rain. Ouch. Arriving home, I was soaked to the bone.

The last maxim I quickly realized on these rides: Let an old girl warm up. Without enough time to wake from slumber, my '77 Kawasaki coughs and kicks like she's riddled with tuberculosis. You don't want to rush her, or she'll buck and kick like a wild iron horse. Just like everything, a little preparation and patience go a long way.