Jordan Peele's "Us" is a Social Nightmare

If there is an "us," that means there's also a "them." No matter how close we are to our "us," whether it's our family, our friends or our country, there is always an "other" into which we can place our blame, fear and hate. The other race, the other culture, the other tax bracket. Muslim, Christian, liberal, conservative. But since the "other" is always relative to who we are as individual human beings, then doesn't that really mean that our own fears and prejudices are in actuality the real enemy? 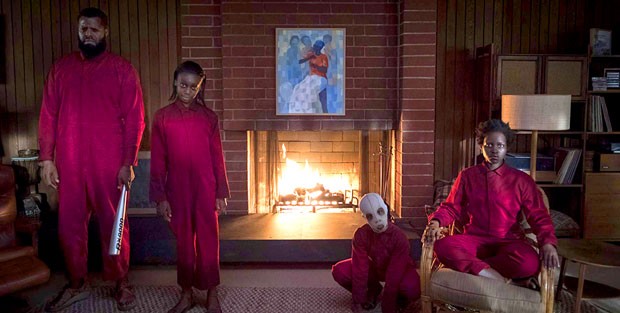 Just like writer/director Jordan Peele's debut feature, "Get Out," his sophomore effort "Us" is a thrilling horror show on the surface with layers of subversive social commentary and philosophy underneath. This is a filmmaker and artist who makes sure every frame has meaning and every line of dialogue is fraught with subtext and meaning.

When Adelaide (a revelatory Lupita Nyong'o) was a girl, she went to the Santa Cruz boardwalk with her mom and dad. She wanders into a hall of mirrors and sees her doppelgänger, causing her anxiety and deeply rooted fear that lasts into adulthood. Years later, Adelaide (along with her husband, son and daughter) heads back to Santa Cruz and the knots of dread start unraveling her almost instantly.

After a creepy day at the beach, that night the family is menaced by another family who looks just like them—except this new family is growling and almost feral, wearing identical red jumpsuits, a single leather glove and each carrying large, golden scissors.

What these people want, who they are and why they're stalking Adelaide and her family are just a few of the mysteries Peele delights in teasing his viewers with, ratcheting up the tension to almost unbearable levels.

To give any more away about the story would be criminal, but the path this film takes is horrifying, insane and impossible to predict. With the film's reliance on simple imagery like gold scissors, white rabbits and red jumpsuits, the story always feels like it's leading you down a rabbit hole—maybe for adventure, but more likely to get beheaded by some insane woman with an army.

Every single person I talked to after the movie had a different interpretation of what the whole thing meant. Some people thought it was a treatise on how childhood trauma affects us as we get into adulthood; others thought it was about the dying gasp of the middle class and how society has an almost Pavlovian response to achieving success, while simultaneously being grateful to just be allowed to participate.

Peele is mercurial enough as a filmmaker to allow for both of those interpretations while allowing for about a dozen more. But none of the subtext or thematic weight would mean anything if he hadn't crafted an excellent film. Because, really, that's what's important. "Us" might be a socially conscious experiment in fear and trauma—but it's also a great horror movie which, for me, is more than enough.