Big Sky bike park expansion is back on, the Bend Senior Center is closing for the summer, changing fees and a bridge update

On Jan. 31, the Bend Park and Recreation District got its final land use decision by the State of Oregon, and can now proceed with the bike park project at Big Sky Park, under the conditions approved by the Deschutes County Board of Commissioners Oct. 29. The bike project will include a pump track, single track trails, a dual slalom course, a bike trails area and a children's skill area for up-and-coming riders. 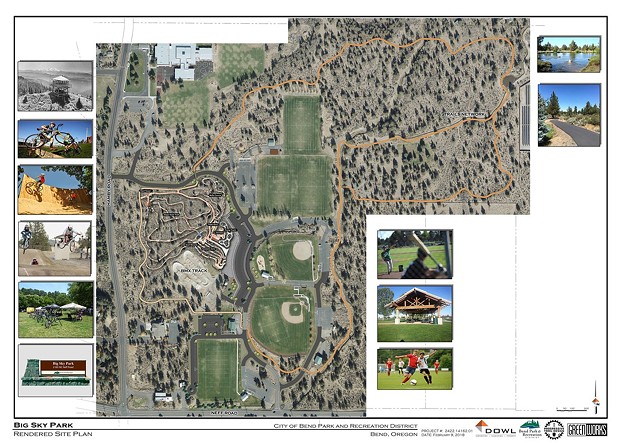 Because of the delays in land use permitting and design, Julie Brown, BPRD's communications and community relations manager, said construction is estimated to start in the spring of 2020.

Brian Hudspeth, BPRD's development manager, said they could wrap up in the fall of 2020—though it's difficult to work on the areas during the fall and the spring because of the heavy use of the existing sports fields at Big Sky. Hudspeth said most of the original design work will remain, but BPRD is working on some alternatives to make sure the bike park fits within its original budget.

Other changes coming to Big Sky include expanded parking, which Brown said will help the new bike park and the existing sports fields, especially during large soccer tournaments.

The bike park nearly died on the table when people in the surrounding neighborhoods opposed certain functions of the park. It went to a hearings officer, who approved the park Aug. 28, but with many conditions, including no events such as bike races.

BPRD appealed the hearings officer's decisions and the Board of Commissions ultimately approved events with conditions, including longer setbacks from property lines, more buffers near property lines and limiting the number of events that can take place each year. Lighting was disallowed except for the parking areas and places lighting is needed for safety. According to the Board's decision, no more than 25 medium-sized events (those with 50-300 spectators) are permitted per year between the bike park east, bike park west and the radio-controlled car track, and no more than eight large-sized events (more than 300 people) can happen per year between the three venues. Also, BPRD can't schedule a large event at the same time as other large events like a soccer tournament.

Meanwhile, the Bend Senior Center will close this summer from Memorial Day to Labor Day for initial work on the Larkspur Community Center project. BPRD said the 14-week closure will save about $250,000 in construction costs and allow for the most disruptive work to occur without impacting the people who use the center. BPRD said Bend-La Pine Schools offered the use of Marshall High School for the summer, which will allow the majority of the programs to continue.

BPRD's current Capital Improvement Plan allocates $21.4 million for the project—which will include a 5,000 square-foot warm water pool, fitness center and an indoor track, among other amenities—of which $1.5 million comes from system development charges and $19 million from property taxes. Pence Construction was awarded the contract in April 2017. According to BPRD, the cost of building the project is $18.3 million, leaving about $4.5 million for other costs associated with the project, including furnishings, equipment and architectural fees.

In 2012, BPRD's board ratified the existing Fees and Charges Policy and an Out of District Use and Fees policy—and they haven't updated them since. According to BPRD, the board is recommending increasing the income level for needs-based assistance for the highest level of need from 100 percent of the Federal Poverty Guidelines to 130 percent. BPRD said this is to be consistent with other state and federal assistance programs.

Eligibility for needs-based assistance will be based on household income and family size. Households that earn at or below 185 percent, but above 130 percent, of the current Federal Poverty Income guidelines are eligible for assistance at reduced levels. The funding priorities are giving to these populations, in order: people with disabilities, including those on long-term disability; youth 18 years and younger; adults over 19 with qualifying health considerations; people over 65 and the general adult population.

Priority will be given to issue-focused programs, core recreation and complementary recreation programs. Needs-based assistance won't be offered for specialized programs, private services or rentals. BPRD said if funding isn't enough to meet the demand for needs-based assistance, officials would consider suspending the funding to lower priority populations, complementary recreation programs, reduce the percentage of fees covered by needs-based assistance and limit the amount of funding each household can receive. At a recent meeting, however, staff stated that the funding has been underutilized in the past—meaning fewer people than budgeted for had applied for and accessed needs-based funding.

Another effort toward a Deschutes River footbridge

The South Urban Growth Boundary Deschutes River Trail Connection, aka the Deschutes Footbridge, has been a contentious subject for Bendites for the last few years. Legislation was introduced to ban a bridge over the Deschutes during the last session. BPRD turned to Oregon Consensus, Oregon's legislatively established program for public policy consensus building and conflict resolution, to find a way to build community trust. During the Dec. 18 Board of Directors meeting, Mary Orton—whose company focuses on mediation and facilitation—recommended BPRD began "mediated trust building conversations" with the public to build (metaphorical) bridges in the community.

Orton also recommended implementing joint fact-findings with BPRD and the public, due to the large number of disagreements surrounding the facts about the bridge, the river and what can and can't be built in the area.

During its Jan. 15 meeting, the Board discussed moving forward with the process with the following changes: broadening the scope from the south UGB bridge to include the entire vision of trails; include working with other agencies to create trail connections to advance trails as part of the transportation system and removing the UGB bridge project from the five-year Capital Improvement Plan to show good faith that the District won't pursue this project before there is a collaborative community process around it.