One man show by Bill Cravis at COCC 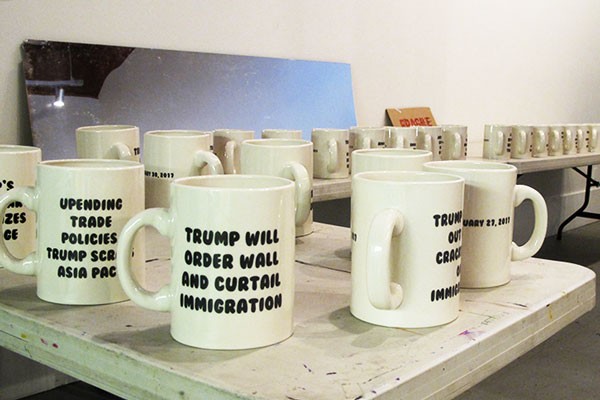 In his upcoming show, Bill Cravis explores the current predicaments of the world in two new large-scale pieces, on display at Central Oregon Community College's Pence Pinckney Gallery throughout the month of May. One piece is in the form of ceramics; one in the form of video installed in a large-box that, well— you just have to get in to see.

An assistant professor at COCC since 2012, this is Cravis' first big exhibition since moving to the area. A sculptor at heart, Cravis doesn't shy away from any medium and is willing to work in a variety of forms, often choosing the ones he feels best fit with the idea he's exploring.

Upon entering the show, people will see the first piece in the show, titled "Reality," consisting of slip cast porcelain mugs—each chronicling a headline from The New York Times over the course of one year, beginning with January 20, 2017—our current president's inauguration day—and ending with January 19, 2018.

"There is something about coffee and the news that are hard-wired together. I started to notice how normal it was to sip coffee and think 'this is a delicious Italian roast' and then there are school shootings in the background," Cravis explains. At first he believed that the headlines would form a narrative over time, but what he found instead is that it revealed what he describes as an "absolute schizophrenia" from one day to the next, a new disaster every day to keep the public distracted. It's a piece that's essentially self-critical and questioning of the numbness of the act of drinking morning coffee and reading the news.

On the other side of the piece is "the box"— filled with a four-channel video that's mostly a "cacophony with harmony, sometimes," as Cravis describes. With both pieces, be willing to step in or step back and look at the whole to truly understand where you've arrived.