In 2021, as Bend Park and Recreation District hosts the centennial celebration of two of our most cherished parks—Drake and Shevlin, take a moment to imagine life in Bend and specifically, in these parks 100 years ago. 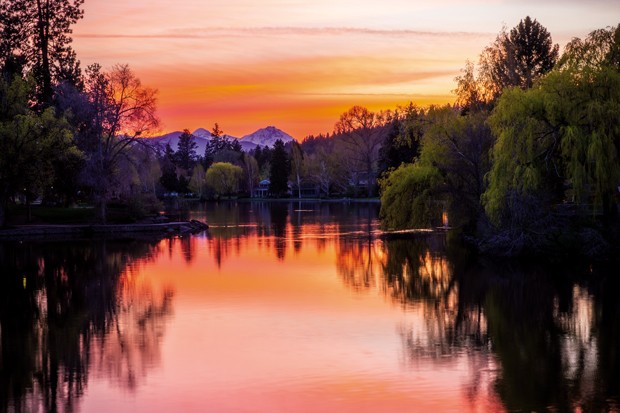 Possibly unrecognizable back then except for the Deschutes River, no doubt the land where Drake Park sits was breathtaking—no homes, sidewalks, bridges or footpaths, just native grasses and trees flourishing. Geese? One can only dream of the reduced numbers back then.


We do know that once upon a time, a log cabin sat on the banks of the Deschutes, which served as Bend's first schoolhouse and then later was home to the Bend Bulletin. Over the years many improvements came and went, including the installation of tennis courts which were later razed. Grasses and trees were planted, footbridges built and rebuilt, and eventually Riverside Boulevard was paved. The famous Bend Water Pageant took place annually for more than 30 years in Drake.

Recognizing early the value of this pristine area, May Arnold, a member of the Civic Women's Improvement League, spearheaded a campaign to gather 1,500 signatures and garner a $21,000 bond to finance the city's purchase. In 1921, the park became city property and later was named after the founder of Bend, Alexander Drake.

Throughout the years, Drake Park has remained a comfortable place of respite where families and friends gather to enjoy picnics and spend quality time together. During warmer months kayakers paddle along Mirror Pond, while lazy floaters take out their tubes and relax on the bank. In winter, near the north end of the park, children brave the small hills just steep enough for sledding. 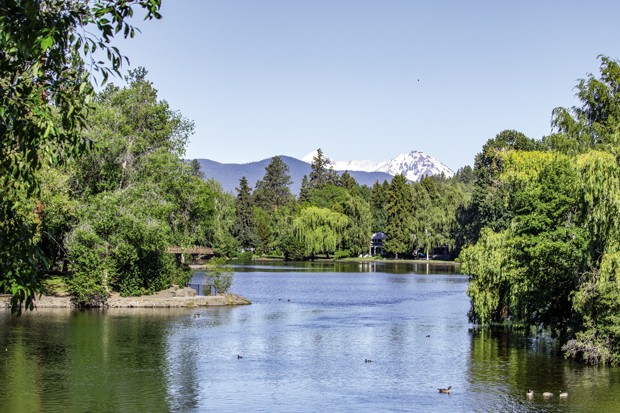 Drake Park's proximity to the city center makes it even more attractive. Tourists and locals enjoy casual strolls before or after visiting shops and restaurants downtown, some stopping to read the placards and learn a bit of Bend history.

Longtime historic events held at Drake include Pole Peddle Paddle, Munch & Music, and the 4th of July Pet Parade, which are currently on pause due to COVID.

Fur trappers searching for beavers were the first Euro-Americans known to visit the area of what is now known as Shevlin Park. John C. Fremont, a well-known explorer, wrote a memorable account of the area's meadows of "good grass, the swift and deep stream, and the majestic larches." While camping one night, his crew even witnessed a lunar rainbow in the area.

For more detailed information about Drake and Shevlin, check out the Bend Park & Recreation website: bendparkandrec.org. Throughout their yearlong celebration, they will be adding first- person stories, photos and memories of the parks, as well as hosting virtual events. By summer, they hope to have in-person events and speakers at the parks. tweet this

Years later, and for a longtime after, the Shevlin-Hixon Lumber Company owned the land. Tom Shevlin, the local timber baron, lived a short, but active and influential life in Bend. He died of pneumonia at the young age of 32. As a memorial, his partner, F.P. Hixon, donated 160 acres of land to the city. He stipulated that the park would keep the Shevlin name and forever be a place of recreation for the general public. Shevlin Park was born.

Improvements over the past century included footbridges, pavilions and trails. At one point, in 1930, Skyliners Ski Club built an ice skating rink in the park, which, of course, no longer exists. The iconic bridge, the one seen in the film Homeward Bound: The Incredible Journey, was recently torn down.

For the most part, the land probably resembles what it looked like long ago as Tumalo Creek flows blissfully through Shevlin and later meets the Deschutes. Quaking aspens shimmer in the wind. Mighty Ponderosas tower high over other mixed conifers and native vegetation. Deer, beavers, otters, trout, eagles and other animals all call the park home. 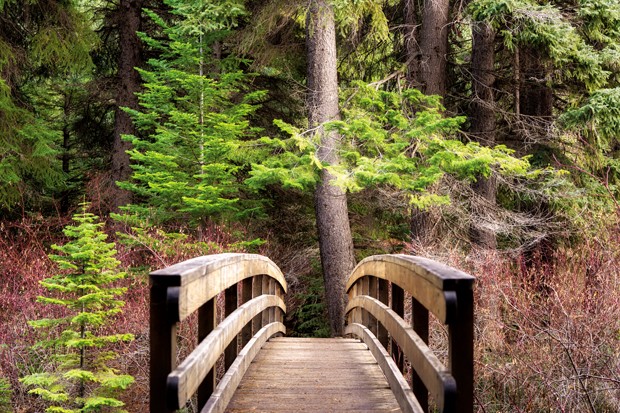 Since the early 2000s additional land has been deeded to the city bringing the total to 981 acres. With such a vast area, the park provides a quick escape from the city where anyone can find adventure. On any given day, you'll find families meandering on trails, adults teaching kids to fish in the small pond near Aspen Hall, kids building dams or skipping rocks in the chilly water and outdoor enthusiasts running or biking in Shevlin.

We often take for granted how lucky we are that our predecessors took the time and effort to protect these lands. Our current efforts toward preservation of such special places will ensure the same experiences for future generations.

Keep up with the Best in Central Oregon:

Joshua Savage is a freelance writer and author of "100 Things to Do in Bend, Oregon." Check out his Dadsthebomb.com newsletter at: getrevue.co/profile/dadsthebomb and go to medium.com/ultimate-scavenger-bend to keep up with the best of Central Oregon.