Central Oregon boasts nationally renowned trails that attract outdoor enthusiasts and endurance athletes alike, with no shortage of races in Central Oregon from which runners can choose. 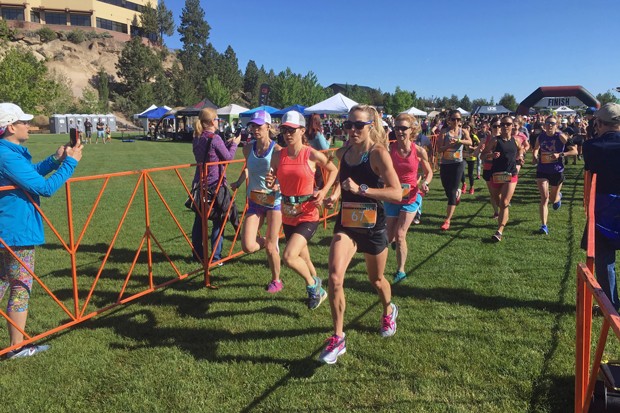 The region also boasts running groups and workshops offered on the regular—many of them geared toward women. According to Running USA, women made up around 59 percent of participants in any given road race in 2018—a percentage that has grown vastly in the last 15 years.

The race series that has the vibe of a beloved all-women running group is the Happy Girls Run series, offering 5K, 10K and half marathons in Bend, Sisters and Spokane, Wash., specifically for women. Men won't be turned away from the races, organizers say—but these are decidedly women's events.

Raylene Spicer, who's 41, doesn't consider herself a runner, but that hasn't stopped her from running multiple half marathons.

"I run pretty slowly, but I just enjoy it," says Spicer. "I like exercise. I like that it's kind of meditative for me, too."

She plans on running the "trifecta" this year—all three half marathons in the Happy Girls Run series. Other than running a 5K or two with her 8-year-old daughter this summer, the Happy Girls Run races are the only races she plans to run. She likes the encouraging nature and camaraderie of the series.

"It's just encouraging and empowering, and I just love the overall vibe," says Spicer. "I never thought running a half marathon was something I was even capable of doing until I tried to run a little farther—then I set that goal and I met it." 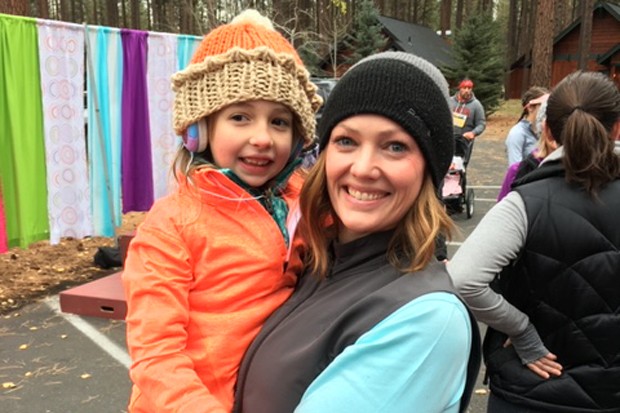 Spicer says setting goals is important, but so is giving yourself grace.

"You don't have to run the whole time, you can give yourself walk breaks," says Spicer. "And it doesn't have to be a scary thing."

Karyn Woods, who is 36 and a mother of three, is the winner of three of the last four Happy Girls Run half marathons in Bend. She found running in her mid-20s — and it soon became a hobby.

“Maybe my fitness goals get me to the line, but it’s my purpose that is going to get me to the finish line—and that is to show up for myself.”—Karyn Woods tweet this

"It became a good release in my life," said Woods. "Like it was a time to just think, process life and, like, my spiritual time. It was just such a great reset for all other things."

In 2018, Woods came in second overall in the Happy Girls Run Bend half marathon to Karlyn Nieland, a runner from Portland. Though this broke her three-year winning streak, Woods finished with her fastest time yet: One hour, 27 minutes and 14 and a half seconds. She says there's nothing like the feeling of accomplishing a personal record on your own two legs.

"Maybe my fitness goals get me to the line, but it's my purpose that is going to get me to the finish line—and that is to show up for myself," says Woods.

Though running is a practice of self-care and meditation for Woods, she says she likes the Happy Girls Run series because it's empowering to achieve her running goals along with other women setting out to do the same.

The first 5K, 10K and half marathon in the Happy Girls Run series is May 25 in Riverbend Park in Bend.