As an economy reliant on tourism, Deschutes County has the third-highest unemployment rate in the state

April 25, 2020
comment
Two experts on the Central Oregon economy presented Friday on the topic of economic shock and projections for the future of the Oregon economy. 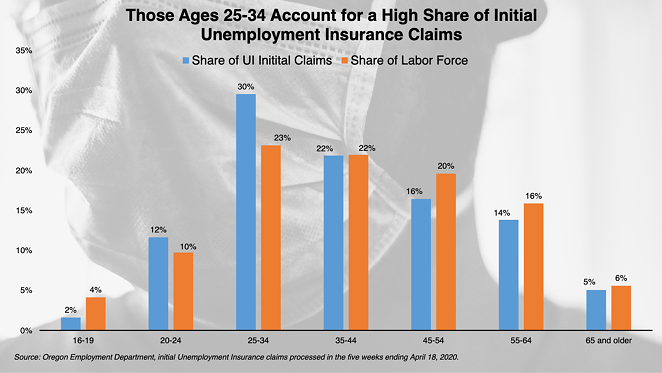 “What is the economy?” Runberg asked at the beginning of his slide show. “It is simply a reflection of us… the collective reflection of our social, our financial and emotional well-being. We can’t really prosper without being physically healthy, either individually or collectively. The notion that we can turn the economy on like a light switch in the middle of a global pandemic really ignores the fact that a surge in sickness and death would affect the economy as well.”


The notion that we can turn the economy on like a light switch in the middle of a global pandemic really ignores the fact that a surge in sickness and death would affect the economy as well. - Damon Runberg tweet this
Runberg emphasized that there’s no comparison for the level of unemployment claims filed in Oregon over the past several weeks.

To date, 26 million Americans have filed claims as a result of the pandemic. In Oregon, the Employment Department has processed 333,000 claims so far—that’s 16% of the labor force, Runberg said. To compare, at the height of the Great Recession, 236,000 of Oregon workers were unemployed.

But this data doesn’t include self-employed workers hit hard by the lockdowns—hair dressers, personal trainers, massage therapists and freelance creatives, for example. Runberg estimates that there are 100,000 Oregonians who fall under that type of category, and once these people are counted, 22-23% of Oregon workers will have filed claims.

Runberg said the State will have the “Pandemic Unemployment Assistance” program up and running in early May. He suggested that people who fall into this category—gig workers, 1099 contract workers, the self-employed—should sit tight until the agency announces the new application is ready, and sign up for email updates to get the latest announcements on the program. People in this program who qualify will get back pay from the time their revenues began to decline, he said.

“It is important to pause for a minute and emphasize that these are people,” Runberg said. “As economists we have a tendency to talk about big numbers and the aggregate and forget the fact that every single one of these people filing claims is a person, is a neighbor—it’s a friend, it’s a family member.”


Deschutes County now has an unemployment rate of 12.4%, making it the third-hardest hit in the state, after Lincoln and Clatsop counties. The hardest hit regions have strong tourism economies and are healthcare hubs for other regions, Runberg said.

“Deschutes County acts as both a retail and health hub for the broader region as well as extending into Eastern Oregon,” he said.

Lower-paid workers (making under $20 an hour) are seeing the highest job losses and represent 61% of total claims filed in Oregon. Millennials (people age 25-34) are the generation hardest hit by the layoffs with 30% of total claims. Xennials and Gen Xers are not far behind, with 22% of total claims.


Josh Lehner—who does economic forecasting for the State—has a “square root theory” of economy recovery: Once the Governor lifts initial restrictions, they’ll be an initial surge due to pent-up demand for things like haircuts and restaurants. After that, he predicts slow growth, depending on how much permanent damage Oregon businesses have suffered as a result of the lockdowns and layoffs.

“It’s one thing to see massive displacement of workers like we’ve seen in the last month,” Lehner said. “It’s going to be another thing entirely if there’s no companies left over coming out the other side to hire these people back.”

Growth may not accelerate for another year, depending on how businesses fare, he said.

Some elements of recovery may depend on government policies, Lehner said.

Along with New York, Washington, California and a few other western states, Oregon businesses received a little less money proportionally to the rest of the country from the Paycheck Protection Program—the Small Business Administration program designed for companies under 500 employees. Lehner estimates the program will bring $3.8 billion to nearly 19,000 companies in Oregon after the second round of funding comes through from the federal government.

“We’ve never had reserves [money for the State] like we do today,” Lehner said. “For the first time in our history, we have a substantial number of reserve funds and ending balances that can help cushion the State’s budget.”

So despite lost revenue, and more demand for public services like the Oregon Health Plan (Medicaid) and the Supplemental Nutrition Assistance Program, the State is financially stable for now.

Currently the State has $1.15 billion in the bank, Lehner said, along with $1.58 billion in reserve funds from the Education Stability Fund (money set aside in the General Fund). In addition, Oregon will likely receive $1-2 billion in federal assistance, which is currently in negotiations and may be shared with cities and counties.