Where to find actual haunts in Bend 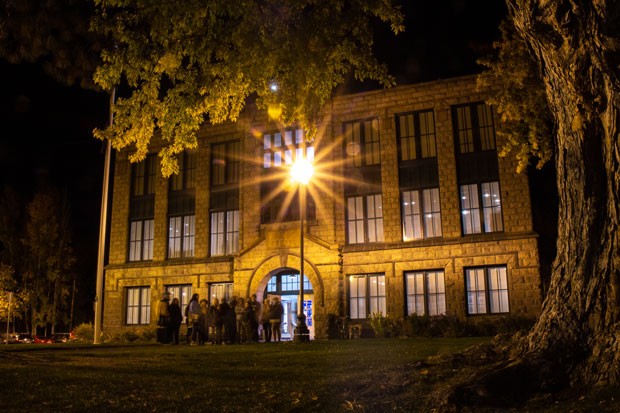 The Deschutes Historical Museum organizes a special ghostly version of its Heritage Walking Tour, only available for two days leading up to Halloween. During those recent seasonal tours, listeners get an earful of history and learn about ghostly encounters that some say they've experienced in Bend's historic downtown.

As a TV ghost show junkie with a soft spot for old buildings, I was excited to go on an educational tour with a spooky twist. Here are just a few of the haunted spots you can find in downtown Bend.

Yes, that's right. The Deschutes Historical Museum itself, housed in the historic Reid School, is said to be haunted. Various employees, including volunteer Vanessa Tupper, have had odd experiences within the building. Staff have come to affectionally attribute to the ghost of George Brosterhous, a contractor who died after falling from the rooftop of Reid School while it was under construction.

"How that manifests itself is the elevator door will open and close all of a sudden, things will disappear and reappear," says Tupper. "If you want help finding something, you can say, 'Hey, George, you know what, I can't find this book, can you help me?' and sometimes that book will suddenly appear on a table that wasn't there before."

Tupper herself has experienced "George moments," as the staff calls these encounters, but she says she's also captured EVPs, or "electronic voice phenomenon" in a corner room on the second floor.

Tupper says it sounded like some of the voices were speaking in present moment, while others seemed to be "reliving" a moment from the past.

Formerly Bend Union High School, the historic building now houses the administration offices for Bend-La Pine Schools. Tupper, who was our tour guide, says an individual on the last walking tour she led, a district employee, said she had experienced "disembodied footsteps." Rumors include sightings of a ghost of a little boy who rides his bike through the halls at night and lights going on and off by themselves. Tupper herself collected an EVP in the building. A tour guest chimed in to say that when she was in the building signing her daughter up for home school, she heard a large "banging" sound in the basement and was told by an employee that the basement is haunted.

OK, so this iconic downtown building wasn't technically on the tour, but Tupper couldn't pass by it without at least mentioning some of the reported ghost encounters. In 2004, the 1936 Catholic schoolhouse was converted into what is now the McMenamins campus. According to an employee who attended the tour, a few of the old bungalows on campus were transported off-location to Sunriver to make room for some of the renovations. She says an elevator located where the nunnery used to sit breaks down nearly every month, lights go on and off by themselves and heating units will sporadically stop working.

This is just a smattering of the allegedly haunted places in Bend. The tour also included stories of the O'Kane Building, the Downing Hotel Building and the building housing Dudley's Bookshop Cafe, among others. To find out more about Bend's history, visit the Bend Historical Society. If you're lucky, an employee may share their own ghostly experience with the spirits that some say reside in the historic Reid School — or perhaps you'll have your own "George moment."


*Correction: A previous version of this story incorrectly stated the use of the bungalows that were moved to Sunriver when McMenamins was a Catholic school. We regret the error.