A trendy style for a trendy beer city 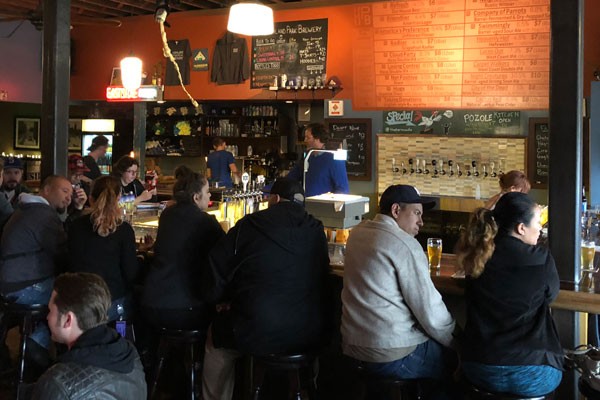 All across the Northwest, breweries are falling over themselves to produce hazy, opaque-looking, juice-like ales, commonly called New England IPAs. It is the opinion of this column (your mileage may vary) that only a couple of them—Great Notion Brewing in Portland and Sunriver Brewing Company—have really nailed the style yet.

People are still arguing over what exactly a NEIPA should be, but on a few things, everyone agrees. It should offer a great deal of fruity, citric hop flavor without a lot of the bitterness thrown out by more "traditional" West Coast IPAs (themselves only a '90s invention). The orange juice-like haziness should be the result of things like suspended yeast and unfiltered hop compounds, not something pre-contrived to look that way. In other words, NEIPAs shouldn't look or taste like regular IPAs, because they can't be crafted at all like regular IPAs—a pretty big ask for brewmasters who have spent careers honing their crafts in other directions.

That's why it's fascinating to travel to Southern California and see how extensively local beer fans have adopted the style. NEIPA is so big there, in fact, the Brewers Association might have to rename it "Los Angeles IPA" before much longer.

This could be seen at a recent visit to Highland Park Brewery, a three-year-old northeast-Los Angeles outfit. HPB brews in a building that once housed a seedy escort joint called The Hermosillo Club—but not even during its heyday would that club have seen a line of 100-odd people out the door, waiting to purchase cans of beer in four packs. That was the scene for the release of Cloud Party, a hazy double IPA with huge tropical-fruit kicks in both the aroma and flavor. It's joined on the taps inside by Losing Control, which matches Simcoe, Citra and Vic Secret hops with an orange-y creaminess, and Feed the Cats, an experiment at combining hazy IPAs with a potpourri of mixed-culture fermentation.

The trend isn't exclusive to HPB; it can be seen in many of the 66 breweries currently operating in Los Angeles County, most of which didn't exist four years ago. Downtown Los Angeles establishments such as Boomtown Brewery and Mumford Brewing have made NEIPAs a keystone in their approaches, the latter often having two or three of their own on tap at once. In the southern suburb of Torrance, the neighboring breweries of Smog City and Monkish (another outfit that hires security to handle the crowds during special releases) are also huge hotspots for SoCal haze. Even the downtown bar run by Denmark's Mikkeller offers a NEIPA, brewed with the help of Alesmith.

Will any of this osmose its way up north? Give it time, because the big California guys are starting to notice. Sierra Nevada's Hazy Little Thing IPA launched region-wide last month in cans, and when San Diego's Modern Times Beer launches its Portland taproom this week in the old Commons Brewery location, they'll be offering Fortunate Sun, a haze-bomb made in collaboration with none other than Great Notion themselves.