He Sleeps with the Fishes | Film | Bend | The Source Weekly - Bend, Oregon

He Sleeps with the Fishes

Jason Momoa was always seen as an interesting choice to play Aquaman. He's obviously not the blonde haired, blue-eyed Arthur Curry we've been seeing in comic books for over 50 years— which is a nice change from Hollywood's typical whitewashing habits. He's also pretty damn masculine compared to the lil' green codpiece-sporting super friend that talks to fish and gets in lots of love triangles with the underwater ladies. 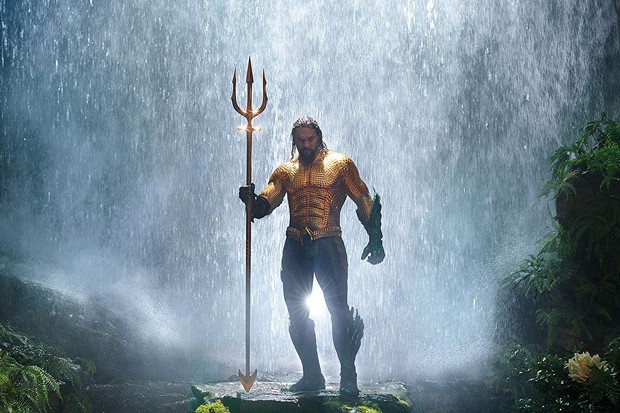 Since Momoa's Aquaman was introduced in a cameo during the interminable "Batman v. Superman: Dawn of Justice" and then actually introduced in "Justice League," we've already seen him in action, but in "Aquaman" he finally gets to take front and center.

In "Justice League," Momoa seemed like he was doing an impression of Macho Man Randy Savage, complete with "Ohhhh yeahhhhs" and everything. The pro-wrestler-meets-Ed-Hardy/Aquabro vibe kinda sucked, so "Aquaman" is Momoa's first real chance to make the character something worth watching.

If the movie was directed by a lesser filmmaker than James Wan ("Conjuring" and Insidious") then it wouldn't have worked at all. The script is hot garbage, filled with some of the corniest exposition and dialogue since, well, "Justice League." But Wan instead created an astoundingly gorgeous underwater universe populated with monsters, gods and Amber Heard.

Visually, the movie dropped my jaw a dozen times and the ridiculous 142-minute running time is packed with so many action set-pieces that it's hard to complain, but the bat-shit insanity of the ideas on display are what make the film truly with watching.

Here are five things in "Aquaman" that are unbelievable to witness:

2. When mid-level villain Black Manta decides to level up his equipment, he gets a welding montage set to Depeche Mode's "It's No Good." Later, Aquaman and Amber Heard walk out of some water set to PITBULL music!!

4. Nicole Kidman scissor-kicks a bunch of mer-people in the face.

5. There's a romantic scene set inside the mouth of a whale.

I mean, I feel like those five things are what we go to the movies for, but that might just be me.

"Aquaman" is not a good movie, but it might be a great one, filled to the brim with Wan's imagination set loose with a bottomless budget. I've truly never seen anything like it and, I suppose, that's what comic book movies are supposed to offer us at the end of the day.