He Talks with Sasquatch | The Source Weekly - Bend, Oregon

He Talks with Sasquatch

Two Bigfoot experts head to Bend to share their experiences

Kewaunee Lapseritis and his wife, Kelly Lapseritis, are two of the most prominent figures within the Sasquatch-lore community. Kewaunee has a background in conservation, anthropology, dowsing (a technique for searching for underground water, minerals, or anything invisible, by observing the motion of a pointer or the changes in direction of a pendulum), psychology and holistic health. He's written two books, "The Psychic Sasquatch and their UFO Connection," and "The Sasquatch People and their Interdimensional Connection," and also made two appearances on the Discovery Channel. 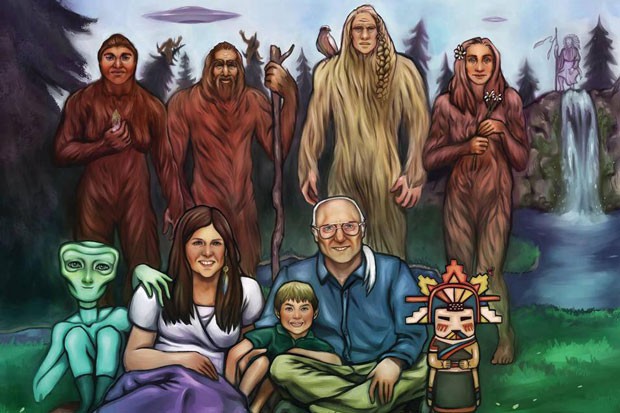 Kelly is the author of "The Sasquatch Message to Humanity" series, and is a clairvoyant, energy worker, wellness consultant and more. The two host the popular Psychic Sasquatch Spiritual Retreat in Chewelah, Wash., that brings in people from all over the globe.

The Source spoke with Kewaunee on the phone before he and Kelly make their way to Bend for their Sasquatch Disclosure presentation. Here's the lowdown on Lapseritis' findings, connections with the Sasquatch and Star People (or ETs), their interdimensional ability, how it all began and more.

Source Weekly: When was the first time you had a Sasquatch encounter?

Kewaunee Lasperitis: Well, the first time I had an experience was in 1979. I was in Wisconsin when this happened. A Sasquatch started talking to me telepathically. He spoke in almost a broken English and I was in disbelief while it was happening, and I was very confused. Every time I thought of something he would answer me. Then I realized it was mental telepathy.

Moments later I walked away from the woods and went off into this field and stood on this hillside in a daze of what had just happened, and a very sophisticated voice came through and said: 'I'm a Star Person that's been watching you for many years. Longer than you know or understand right now.' Then I looked around and I didn't see anything, I wondered where he is. Then that's when he answered me and said, 'Well, right now I'm above you in a UFO as you people call it.' He said he was in another dimension. I was thinking that I'll never tell anybody that this happened because it's crazy stuff and one of those rare, one-time situations. Well, it wasn't rare and it wasn't one time. It's been ongoing now for 43 years. Since then I have documented 444 people that have had telepathic communication with the psychic Sasquatch.

SW: Do you keep track of how many encounters you've had over the years?

KL: For myself, I've had over a thousand. Some of the times I was sick—one time with pneumonia and they healed me overnight. Another time I had a brain tumor and they also healed me of that. The reason for that is because I've published two books about all of this now because it's real. It's authentic. I can't prove, but I'm not trying to prove it. William James said it takes only one white crow to prove that all crows aren't black. Analogously speaking, I have 444 white crows.

SW: What are some of the biggest misconceptions you hear about Sasquatch People from those who are maybe skeptical or just non-believers?

KL: First of all, I try to avoid butting heads with people. I'm very respectful of other people's belief systems. This doesn't really have anything to do with belief, it has to do with how many times I've experienced the psychic Sasquatch. I'm not shy anymore about discussing this. It's important to get this information out, to stop the monster hunting, to stop trying to kill the Sasquatch, just to try and prove that they exist. I don't see the sense in murdering another race of people.

SW: What are some of the messages the Sasquatch people give you? Do they have views on the way we live?

KL: Yes. They say a lot of what we do is childish. Because we are unaware of the rest of the cosmos and what is going on in the world and what we are doing to the planet. They said right now, 'The planet is dying and if we don't do something the humans on the planet will be number one on the extinction list.' They also said that World War III has basically started but they just haven't dropped the bombs yet. That it's going in this direction.

SW: Is their way of trying to help save Earth by reaching out to humans?

KL: They've said to me, 'We can only ASK the leaders,' and they already have, or the leaders can't do anything or won't do anything. If they [Sasquatch and ETs] stepped in, then our karma would become their karma. They really emphasize the importance of karma. What you do is what you're gonna' reap—if it's positive then you'll reap something positive; if it's negative then you're gonna reap something negative. The ETs emphasized this back in the 1980s and then later the Sasquatch talked about it to me about 15 years ago.

Now they can't do anything to help us. They can only sit on the sidelines and watch and try to influence us a little at a time. Because they can't outright change something and interfere. Apparently, it's a cosmic law.

SW: Are there different races or species of the Sasquatch people? How would you classify that?

KL: Yes. They told me that there are seven different races of their people worldwide. Some are only about 3-and-a-half feet to 4 feet tall. Some in Indonesia that are 5 feet tall, some in China that are 6-and-a-half to 7 feet tall. Then there are the super giants that are 12 & 15 feet tall – a few of them even taller than that even. These are rare, but they are here on this planet. Some in the United States. However, they are interdimensional. They live in the wilderness and when they are threatened they go through portals. Doors to another parallel world that's right here, right beside us. They've told me this many, many times. I've found portals and I telepath to the beings on the other side and I've had answers back from both male and female ETs.

SW: Have you ever had a Sasquatch encounter in Oregon?

KL: Yes, oh many different times in Oregon! They used to follow me home [Roseburg] and come out on my deck at night and walk around and sometimes talk to me. Where I live now, in eastern Washington State—on the mountain where I live here there are eight Sasquatch that come and visit us periodically.