N/A drinks for a Dry January

Adam Driver once joked that Dry January "means you just don't take a bath." When the month-long test of self-wellness was invented, by modern-day abolitionists, I suppose, I'm sure their hearts and livers were in the right place. It's believed that more than 10% of Americans will lay off the hooch, the vino and the suds this month, ostensibly to reset or detox. Maybe you've resolved to drop the few pounds of candied yams you tacked on, or longer term, kick the tires on that Keto diet thingy and you're not thrilled about cutting all carbs and sugars, but ditching beer will be easier than abstaining from bagels and burger buns. Or maybe it's a simple matter of having drank double closing out 2021, so this month you're hydrating instead of dehydrating.

Good news for beer lovers who plan to go a month (or more) without beer: Whether you're an IPA-guzzling hop head or a lager-lover who just craves that subtle kiss of hops, you needn't give up those herbaceous flowers in your quest to sample sobriety. The N/A beer category has grown by more than 10% yet again. 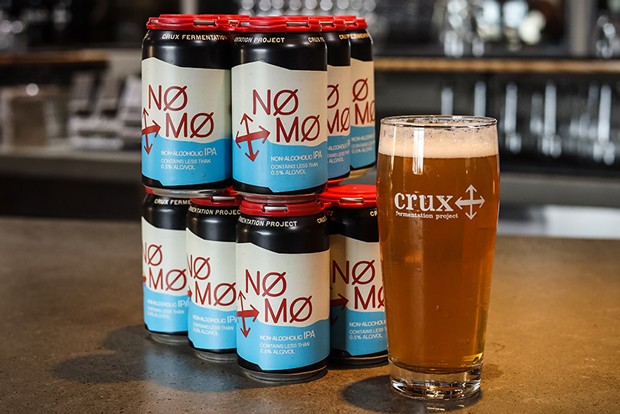 The inverse of its Gimme Mo IPA, Nø Mø is built like an IPA, but sans party. This may come off as damning with faint praise, but it's one of the best near beers out there—which is tons given how many breweries offer it including a growing number of dedicated N/A breweries that've cropped up. Bonus: it's brewed here in Bend. What separates near beer from real beer is the life pumped in via fermentation; yeast creates alcohol and carbonation. Some alcohol-free beers taste completely lifeless. Worse, they taste like yeast cells that weren't given a job so they just lounge around in your glass like a packet of Fleischmann's soaking in La Croix. In this concoction, the uber popular Mosaic and Citra hops miraculously find a life preserver to cling to in order to arrive at a destination that, flavor wise, preserves an approximation of beer.

This one's also brewed in Bend, though I'm not sure "brewed" is the correct verb. It's completely devoid of carbs, sugars, gluten and booze. What it offers instead is an intriguing herbal refreshment akin to Lagunitas' Hoppy Refresher or another brand of hop water, HOP WTR, also out of California. Hop Springs can often be found at Newport Avenue Market, 3rd Street Beverage, and Food 4 Less.

Portland-based Aurora Elixirs began with hemp-based beverages somewhere between sodas and aperitifs, offering adults a drink with CBD's benefits and without the deleterious effects of alcohol. Later, the company introduced a related line, but swapping the cannabis-derived ingredient for a cannabacae-derived one (hops). You see, in their taxonomy—remember King Phillip Came Over For Good Soup?—ganja and hops are from the same family, different genera. So by using CO2-extracted hops, the aromatic and flavorful terpenes found in hemp mirror those in hops and produce similarly relaxing vibes. Plus, additions of grapefruitesque pomelo or lemon-like yuzu complement hops' citrusy notes as well. These bottles (and soon cans) are available at Market of Choice.


A kombucha that tastes surprisingly sweet despite its extremely low sugar level (8 grams). In fact, anything this rich in probiotic cultures (and vitamin B12, to boot) sounds like it shouldn't even taste good, but our local Humm Kombuchas are devoured by enthusiasts for their benefits equal to their flavors, so this "IPA replacement" just makes sense.


From Boulder, Colorado, HopLark's founder Andrew Markley describes this line of canned, carbonated, iced teas as, "a healthy tea brewed from real plant-based ingredients that just happened to have the complex flavor profile of a craft beer." There are several brands available at Market of Choice and Whole Foods, including seasonal offerings.