On the southeastern tip of Bainbridge Island sits an exposed swath of bedrock—a sign of past seismic activity, one not often seen so close to the surface. It's a geologic phenomenon, geologists say.

Bainbridge Island, near Seattle, is also where Nicola Carpinelli was living when he began a descent into depression and substance abuse, he says. Call it his own descent into the bedrock, if you will.

Carpinelli is an artist, musician and former TV professional who's called places including Los Angeles, Europe, New Mexico, Bainbridge Island, and now, Bend, home. He's emerged as an advocate for opening up the dialogue about suicide, holding an art show and panel discussion on suicide this week at Peterson Roth Gallery. The subjects of Carpinelli's paintings include people who died by suicide. They include, among others, Anthony Bourdain, Chris Cornell of the band Soundgarden, David Bowie, Kate Spade, Margaux Hemingway, Ernest Hemingway and Genevieve Vargas, a teen girl with whom Carpinelli developed a bond several years ago.

Art, now and then

For Carpinelli, the show and its works represent a re-emergence of his own artistic creativity—the first series of paintings Carpinelli has felt ready to share with the world since he began battling substance abuse, depression and suicidal ideations back in the Puget Sound.

"It would have been nice to get the instructions—like the ones you get on the back of a bottle, 'caution, you will lose your family after 15 months of using this drug, and lose your business,'" Carpinelli reflected. tweet this

That's where, as an art gallery owner and musician, he rubbed elbows with the likes of Ben Shepherd, bass player from Soundgarden, a connection that would eventually connect him to the band's frontman, Chris Cornell. Carpinelli talked of meeting Shepherd shortly after moving to the Seattle area in 2001. Early on, Seattle's rainy days—and seasonal depression—had yet to affect him, but in Shepherd, Carpinelli saw a preview of what might come.

"We were hanging out every day... and come September, Ben disappears on me," Carpinelli explained. The following spring, Carpinelli said he ran into Shepherd, who begged him not to be offended by Shepherd's absence. "You don't know what winters do to you here, he said," Carpinelli explained. "I still had the L.A. sun in my body. The next year I got a taste of what that's [seasonal depression] like."

Carpinelli's opening an art gallery in Seattle's Pioneer Square added more temptation, becoming a hotspot for artists and musicians to hang out. One day, Carpinelli says an employee gave him a drug that changed him.

"It would have been nice to get the instructions—like the ones you get on the back of a bottle, 'caution, you will lose your family after 15 months of using this drug, and lose your business,'" Carpinelli reflected. "I had an amazing career—I was showing at all kinds of galleries... writeups... selling to Gucci, the Stray Cats guys were buying my work, the Soundgarden guys were buying my work. I took it down to zero. I had sunk my world within two years. My wife was gone, the kids were gone, and then what's next? Nobody to hold me accountable. I really went deep pocket."

A decade of "deep pocket" ensued.

During the deep pocket days, Carpinelli met Ryan Brown, who became a bandmate in the Seattle band, Amazing Murder Video.

Lyrics from Amazing Murder Video's 2013 song, "The Hurting," reveal some of the depths.

"And the last thing I hear is OK
Don't try to save me now
It's too late."

Carpinelli described Brown as a friend who was there, even during the "hard drug" times.

"I was a nice mess, but a mess nonetheless," Carpinelli now jokes.

After a number of years, Carpinelli says he had "what can only be construed as a vision from God." He said, "I felt this lightness. I felt sober. For the first time... in this period, I had clarity, and I just got into action."

Following that, Carpinelli says it was Brown who convinced him to move to Bend.

"Bend, Oregon, had a lot to do with me painting again after this 10-year hiatus. I don't know if it's the high desert or what magical quality this town has, but it has something—there's something really beautiful, spiritual seeking kind of vibe that it has." That "magical quality," combined with a significant event for Carpinelli, launched the Dead Poets project.

After celebrity chef Anthony Bourdain killed himself in June 2018, Carpinelli was struck hard.

"When I was using drugs and alcohol, it's like, you're muting your heart because of past pains, but you're doing it with a Band-Aid... you have a wound the size of the Grand Canyon you're trying to cover. 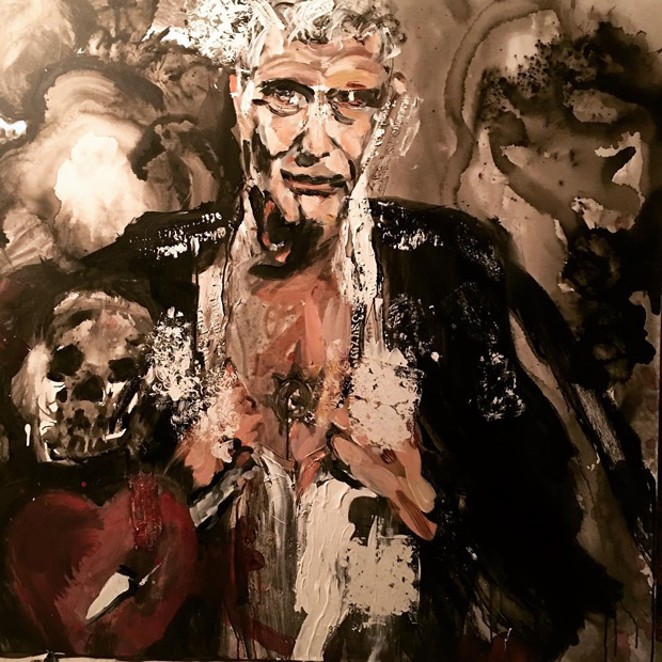 "When Bourdain died I was sober, and now I'm feeling these sadnesses again—so I had to express it. 'Hearts Unknown'—which is the title of the [Anthony Bourdain] painting—came to mind. I painted that, and then I started to think about Chris Cornell. It felt good to paint this, to put it on canvas."

Bourdain led to painting Cornell, to the Hemingways, to Robin Williams and many others.

The website reportingonsuicide.org, maintained by partners including the American Foundation for Suicide Prevention and the Substance Abuse and Mental Health Services Administration, offers its Recommendations for Reporting on Suicide, aimed at helping media professionals cover suicide responsibly. Among its recommendations are guidelines around avoiding the glorification of suicide—a topic that had me wondering whether an art project can be construed as "glorification."

Carpinelli doesn't see it that way; nor does a psychologist who's worked with him. For Carpinelli, who contemplated suicide on many occasions during low points of his life, the Dead Poets series offered a catharsis for himself—and ultimately, an opportunity to share his journey with others.

Before his move to Bend, Carpinelli says he sought help from Howard Asher, who holds a doctorate in psychology. Asher—who will also be on the panel discussion at Peterson Roth Gallery Sept. 10—shared some insight into art as a therapy, for both artist and viewer. (Carpinelli gave the Source permission to talk to Asher about his treatment process.)

"For better or worse, Nicola is an artist," Asher explained. Whatever challenges artists are facing, Asher said, "The artist will process it creatively and emotively. He's going to do everything through an artist's perspective—and it's a blessing for the rest of us."

In the case of Carpinelli, who's had his own suicidal ideations and has used the Dead Poets project as a way of processing others' suicides, Asher tries to explain it by saying, "He's in conflict with understanding, and also not understanding it."

Supporting those with suicidal ideations

Asher's recommendations around helping those considering suicide come with the caveat of "it depends on the situation." As a general rule, however, Asher recommends that "you remind the person that you're interested and caring in what they're going through. And if you say that, you'd better come off sincere."

Also, take people seriously, Asher said. "You don't want to deny what a person is saying. If they say they're terrible, you don't go in and say they're great; you say, 'What makes you say that?' With genuineness and curiosity, you would want to find out stuff that's unpleasant to hear and be present in it. Even clinicians have a hard time 'being present' in it. When someone dies, you don't have to say anything—you just have to be there. You don't have to solve the problem, but you just have to be there."

The National Suicide Prevention Lifeline also offers resources and tips for people who have loved ones who may be suicidal, including being willing to listen, talking openly about suicide, and removing means, such as pills or weapons from the person's vicinity. It also recommends calling 1-800-273-TALK (8255) to get more help for one's self, or another person. (See more resources in the sidebar of this story.)

Carpinelli's exhibit has already been creating a buzz, both in Bend and beyond. Panelists for the Sept. 10 discussion include Mariel Hemingway, whose sister and grandfather are featured in the paintings. Carpinelli also talks of bringing the exhibit on the road—but for now, his sole goal is this first show and an opening of dialogue about suicide. Sept. 10 also happens to be World Suicide Awareness Day.

As Carpinelli puts it, "I'm willing to put myself out there so that maybe we reach somebody here."

Check the Source calendar for other Suicide Prevention Week events

Editor's note: The print version of this story misspelled Ben Shepherd's name. We regret the error.