Mastodon plays on the same bill as Primus this week. Here's what to love about their show at the Amphitheater 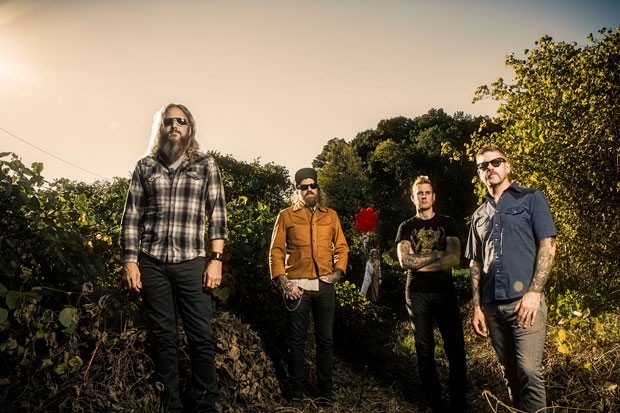 Mastodon won its first Grammy earlier this year for best heavy metal performance. The band has been lumped in with the new wave of American heavy metal that began in the 1990s with Pantera and Machine Head and the preeminent metal act of the 21st century, Metallica.

But over its 18 years of existence, the quartet has been tagged as stoner rock, prog and nearly everything in between—which is more than fine with bassist Troy Sanders.

"I'm glad there are multiple tags placed on our band," he said. "When the four of us got together, we were rooted in Judas Priest, Thin Lizzy, Iron Maiden; we've toured with Slayer, Iron Maiden, Slipknot, Tool — all our heavy metal heroes.

It all started in 2000, when Sanders joined up with guitarists Brent Hinds and Bill Kelliher and drummer Brann Dailor in Atlanta via their mutual love of sludge and started writing songs that were distinctively theirs, both lyrically and musically.

"The same four guys have remained in the band since day one; that's been 18 years," Sanders said. "I think each of our characters goes into every song. The four of us, I think, have a unique diversity. All of us being involved in songwriting, writing lyrics, working up the songs. That gets away from repetition.

"We joined forces in the year 2000 because we wanted to make our type of music, jump in a van and take it anywhere in the world where people wanted to hear us," he said. "Since day one, we've been road dogs."

Mastodon released its first album, "Remission," in 2002. Two years later, it put its stamp on the rock world with "Leviathan," a concept album loosely based on Herman Melville's "Moby Dick."

Named album of the year by metal magazine, "Kerrang!," "Leviathan" got Mastodon signed to Warner Brothers records and out on an extensive tour of the U.S. and Europe, setting a pattern that has continued through its next six albums.

With each record, Mastodon's shows have been bigger, on their own or touring with Tool, Slayer and Metallica. And each album has continued its musical explorations, with concepts as deep and challenging as the music.

In 2017, came "Emperor of Sand," a concept album revolving around a curse placed on a wandering traveler by a despotic ruler, a metaphor for being diagnosed with terminal cancer. That theme emerged after two band members' mothers were diagnosed with the disease. So was Sanders' wife, Jeza, who underwent treatment for breast cancer, recovering in 2015.

"Sultan's Curse," the song that sets the theme for the record, wasn't a chart hit, but it's now a Grammy Award-winner that put Mastodon, after a long, diligent slog, at the very top of rock.

"We've done it the long way, the hard way," Sanders said. "We feel like we're not yet to the peak of the mountain. Everything is fresh and forward thinking. Had we been an overnight success, won Grammys right away, stuff like that, I think we would have lost the momentum."

Mastodon hasn't yet formally begun work on a follow-up to "Emperor of the Sun." But that doesn't mean the band isn't constantly thinking about creating new music.

"We're not working on it specifically, but the wheels of creativity are always turning," Sanders said. "I just left band practice a couple minutes ago and we recorded a couple of ideas. We do that all the time, if we get good ideas, we record them, get them down and keep them around."

That practice was to prepare Mastodon for the tour with Primus—a perfect pairing of genre-defying bands, in Sanders' view — as well as some headlining and festival dates.

Going out with Primus to play amphitheaters and arenas, as well as September's headlining tour that follows that run, will be far different than those experienced when the quartet hit the rock clubs in the 2000s.

"The comfort level is better," Sanders said. "We're lucky enough to afford a new bus we all pile into. It's nice to have 11 roommates in a rolling one-room studio apartment. It's still tour life. But it's not four guys and all our equipment in a van driving overnight. So, yes, it is more comfortable."

Playing shows, Sanders said, remains at the heart of Mastodon, both for the fans and the band members.

"I still find it satisfying," he said. "My heart wouldn't be in it if it wasn't rewarding to me, personally. We're definitely not out there going through the motions. If I didn't love this, I'd get a job closer to my home."