"Help Is On The Way"

$2 trillion federal stimulus will likely pass, including at least $1200 for everyone who filed taxes in '18 or '19

March 25, 2020
comment
The largest economic aid package in American history is expected to pass within days, following compromises from both sides of the aisle in Washington, D.C.

According to Oregon U.S. Sen. Jeff Merkley—who hosted a virtual press conference from Washington, D.C. with Oregon reporters this afternoon—Oregon will receive up to $1.5 billion in stabilization funds, of which about half will be distributed by Gov. Kate Brown. The rest will go to cities and counties depending on population. 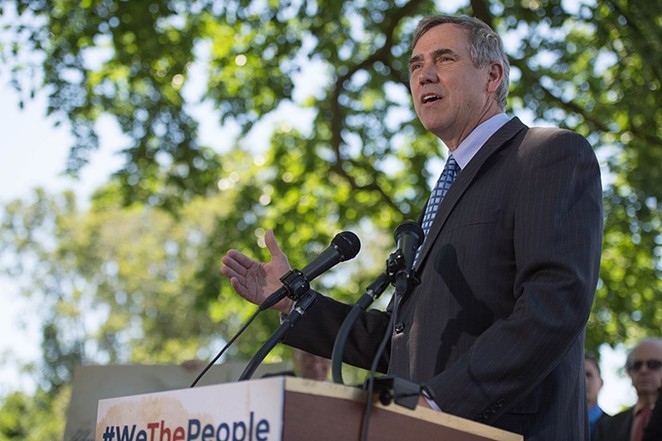 Highlights of the legislation:


Everyone who filed their taxes in 2018 will receive $1,200, unless you make over $75,000. The aid phases out completely at $99,000. Families receive  an additional $500 per child. For those who didn’t file in 2018, you can still get a check, you just have to file for 2019. There was some partisan squabbling on this one: Republicans wanted to only give the money to people who actually paid federal taxes, which would have excluded most people making under $40,000. Other legislators including Sen. Bernie Sanders (I-Vermont) wanted monthly payments of up to $2000 until the pandemic passes.


For those recently out of a job, or concerned about the impending doom of furlough, this bill comes to the rescue. Here in Oregon, unemployment insurance runs out after 26 weeks; this bill adds another 13 weeks onto that. Another limitation of unemployment insurance is that most people collect only a fraction of their salary week-to-week, so for those living paycheck to paycheck, or barely able to make ends meet, unemployment can be devastating and could have domino effects like evictions, foreclosures and no money for food.

Merkley said the bill includes an extra $600 week in unemployment benefits for those out of a job due to the coronavirus, including gig workers like freelancers and Uber drivers. While Merkley supports the boost in unemployment, this provision is controversial with some Republicans and was preventing the bill from moving forward in the U.S. Senate Wednesday.

It’s essential that we address the economic implosion of America in ways that we’ve really never seen. Small businesses are closing left and right because of social distancing… This is touching just about everybody. - U.S. Sen. Jeff Merkley tweet this

“It’s essential that we address the economic implosion of America in ways that we’ve really never seen,” Merkley said. “Small businesses are closing left and right because of social distancing… This is touching just about everybody.”


For businesses with under 500 employees, the federal government will provide loans to companies that pledge not to lay off workers. This lasts through June 30 and the loans will become grants if the employer pays their workers through the entire crisis.

Merkley explained that the government actually picks up the tab for 125% of the payroll and businesses can use the other 25% on core business related expenses, such as rent and utilities.

“This is great for team members [at a company] because they don’t face the stress of unemployment insurance or figuring out COBRA,” Merkley said.

COBRA stands for the Consolidated Omnibus Budget Reconciliation Act of 1985 which requires employers to extend health insurance coverage to their employees after laying them off. Employees just have to fill out some forms and get it set up, but the downside is that then employees are usually stuck with the bill for the plan. The Oregon Health Plan is available for those making under $1,396 per month in 2020 (for those with children, income levels are higher).


While some Americans on both the left and the right are still bitter about the Wall Street bailouts that came at the beginning of the Great Recession in 2008, this bill has strings attached. The Federal Reserve will disperse $425 billion, with an additional $75 billion for specific industries including airlines and hotels.

Merkley said the final details are still in negotiations, but he pushed hard for an oversight board that would disclose the details of the funds to the public between three days and three months of disbursement.

“This is a huge improvement from what [Sen.] Mitch McConnell and the Republicans put together that had no accountability, no transparency and no standards,” Merkley said. “Sen. Elizabeth Warren will likely form the oversight board. I had previously called this the slushiest of slush funds.”

Democrats also insisted that the Trump family—and any other senior government official—is not eligible for loans through the fund.


The bill provides $130 billion for hospitals, health care centers and nursing homes throughout the U.S. This will fund personal protective equipment, test kits and even construction of new temporary facilities to house on the onslaught of expected new patients in the weeks to come.

The massive bill also includes $7 billion in housing assistance, though Merkley said that was far less than the $40 billion he pushed for.


Do keep in mind by sustaining income in a robust way for small businesses and the newly unemployed, it should dramatically improve people’s ability to pay their rent or mortgage. - U.S. Senator Jeff Merkley tweet this

“Do keep in mind by sustaining income in a robust way for small businesses and the newly unemployed, it should dramatically improve people’s ability to pay their rent or mortgage… We’re helping through the front door; there’s more help in here for housing than it may appear on the surface,” he said.

Merkley stressed at the end of the press call that his office received 700 calls yesterday from concerned Oregonians. Health issues were their number one concern, with people asking Merkley, how deadly and how contagious is the coronavirus, according to national experts?

“Experts do not have certainty, numbers from other countries may not be well reported,” Merkley said. “People realize that during a really bad flu season, 600 Oregonians may die of a bad flu, and here the deal toll is far less. But we are at the very base of a very fast epidemic. It is far worse than the flu.”

Merkley concluded that most of his staff is working from home for social distancing. While he remains at the Hart Senate Office Building in Washington, D.C., he said he is living off toasted peanut butter sandwiches, and the building is mostly empty.