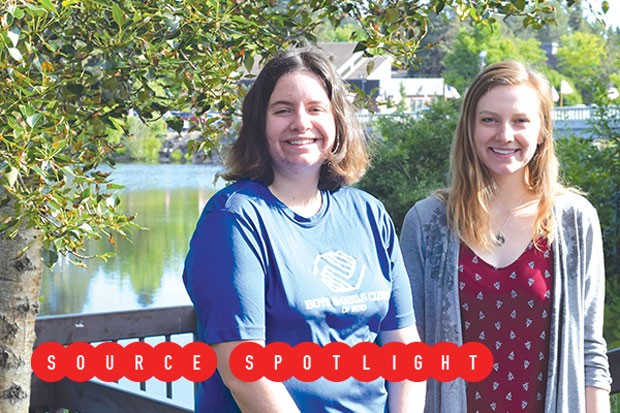 Hundreds of employees keep Central Oregon's nonprofits and support organizations running. But many also rely on volunteers. AmeriCorps fills a gap in between—providing opportunities for those looking to gain experience and help an organization in need.

Sierra Mayer and Taylor Smith are two members of the Notre Dame AmeriCorps in Bend. Mayer is serving with Boys and Girls Club and Smith is serving with Saving Grace. Both are working 11-month programs in organizations close to their hearts.

"It's always been described to me as being the domestic Peace Corps, because originally I was really interested in joining the Peace Corps, but I felt like I needed to stay in the country," Mayer said. "I was just more interested in helping the problems that I saw developing in our country. I saw that there was a lot of budget cuts to education and working with kids, so I felt like that was an issue that I could personally address."

The Notre Dame AmeriCorps was brought to Bend in 2010 by the Bend Volunteer Community. More than 60 members have served since that time.

Joining AmeriCorps is not just about helping people, but also about developing skills in one's career field.

"It's a really good way to just try something out and see if you like it without having to go to grad school first," Smith said. "And it provides an education award at the end of the year that you can use for loans or toward future education."

Mayer is from the San Francisco area and Smith is from Bend, but both have found their homes with their new communities in the local area. Although their organizations are both similar in many ways, their experiences are completely different. Smith came into the program because she already had experience with Saving Grace and found a way to stay there.

"While in college, I got involved with the Inside-Out Prison Exchange Program, bringing education inside prisons all four of my years, and that was my entry into social work," Smith said. "I came back to Bend in 2016 [and] I started volunteering for Saving Grace. I volunteered for about a year and knew that I loved this work and wanted to get a job in it somehow, and an AmeriCorps position opened up. That's how I became an AmeriCorps member."

AmeriCorps offers members the chance to do more than just gain experience, but to really make a difference in people's lives. Mayer's childhood changed her outlook on helping children, and she wanted to help others in the same way. When she was in second grade, a kind gesture by a teacher who stayed late to help her improve her reading skills changed her life.

"Anytime someone secures safe housing and gets to move out of shelter, that's awesome. It's always really exciting when something happens that's positive because there's just really a lot of really hard stuff." —Taylor Smith tweet this

"So when I started here, there was a kid who was kinda in the same boat. She was in the Spanish immersion program and I think because of that, some of her English skills weren't as developed as they should be as far as reading goes," Mayer explained. "So she struggled, I could tell that she wasn't super into reading, but I worked with her and I actually wrote her a book for her birthday and illustrated it called, 'Layla the Brave.'

"So reading became a fun thing for her," Mayer continued. "She made a friend and her and this friend would read to each other all year—and because of that now she's at grade level, which is a huge difference compared to what she started at the beginning of the year."

For Smith, helping women and families can have its highs and lows, but there are many moments when people at Saving Grace can celebrate their wins, both large and small.

"It's really exciting every time a client successfully gets a restraining order granted or if their abuser contests it and it still gets upheld in their favor. That's really exciting," she explained. "But that's still just one step in a really long journey. Anytime someone secures safe housing and gets to move out of shelter, that's awesome. It's always really exciting when something happens that's positive because there's just really a lot of really hard stuff."

AmeriCorps opportunities in Bend include not only Boys and Girls Club and Saving Grace, but also Bethlehem Inn, the High Desert Museum and the Children's Forest of Central Oregon. The AmeriCorps website has a job search with all jobs across the nation in every organization. Members are given a living stipend, an education award, health care and child care during service, professional development opportunities and many other benefits.

"If somebody is interested in AmeriCorps, their best step is to kind of figure out what they personally see as a problem and there's going to be a program within the AmeriCorps system that offers a solution to that problem that they feel passionate about," Mayer explained. "Whether that's working on education with kids or domestic violence or really anything, and because they want to serve and work on finding a solution to whatever this problem that bothers them is."