Healthy Beginnings, named the Bend Chamber's nonprofit of the year, offers free screenings that can identify barriers to learning

Healthy Beginnings has had a "diamond" year, according to Executive Director Diane Murray-Fleck. The BendFilm Festival chose the nonprofit as the subject of a 7-minute documentary shown throughout the event, and the Bend Chamber of Commerce recognized HB as nonprofit of the year. Since coming on board to lead the organization two and a half years ago, Murray-Fleck also spearheaded a new bourbon tasting event to attract more donors from the local business and corporate community, and expanded the organization's services to include mental health support for parents and caregivers. 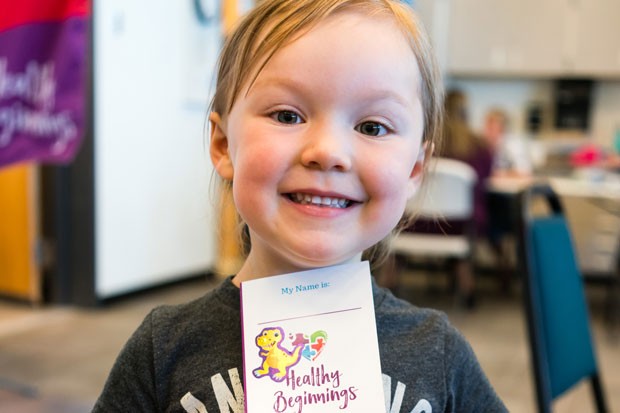 Healthy Beginnings was founded 20 years ago in Bend, and is the only nonprofit in Oregon providing free, one-day, comprehensive health and developmental screenings for children under the age of 6. A rotating team of 25 volunteers—from retired pediatricians to speech pathologists—set up mobile health clinics in churches, schools and other nonprofit facilities, serving 450 children a year in Deschutes, Jefferson and Crook Counties. The nonprofit conducts exams for hearing, vision, motor skills, health, dental, behavior, development, speech and nutrition, providing a value to participants estimated at $3,000. Children are given a "passport" upon arrival at the pop-up clinic, with a goal of collecting stamps at each screening station. If they make it through all 10, they get to spin a prize wheel and take home a gift.

"About 38% of kids in Oregon arrive to kindergarten with some kind of barrier," said Murray-Fleck. "This is a statistic we should be concerned about. By the time kids arrive at school, it probably takes six to seven months for these barriers to be identified and for services to be wrapped around it."

Murray-Fleck also noted that catching problems early on is much more cost effective. For every $1 spent on prevention services, $6 is saved, she said.

Dozens of studies from the Center on the Developing Child at Harvard University argue that while most kids won't start their formal education until age 4 or 5, a child's formative years are the most pivotal for their success later in life. In the first few years of human brain development, over 1 million new neural connections are formed every second, and neural pathways remain plastic and flexible from birth to around five years old, according to the research center's website. Murray-Fleck believes that if learning disabilities are caught early enough, a child has a better chance of succeeding in school and in life.

"I spent a lot of my career as a school social worker with kids who struggled for years with a barrier to learning that was not identified," Murray-Fleck said. "Even when we were able to repair the concern, there is a mindset that takes hold in a child when they know they are different from other kids. I wanted to be a part of the solution."