Hey Baby, (Who Cares if) it's Cold Outside!

What do food cart lovers do when the weather turns? Turn to the indoor beer gardens and heaters, of course

According to Caleb Trowbridge, those are a few of the things that make The Podski a special place any time of year. Add in a fire pit, a new, heated building, food carts offering up warm hearty foods like stew, fried chicken and perogies, "Thirsty Thursdays" and "Hump Day" music and three televisions tuned to football and you've got a good time rain (snow) or shine. 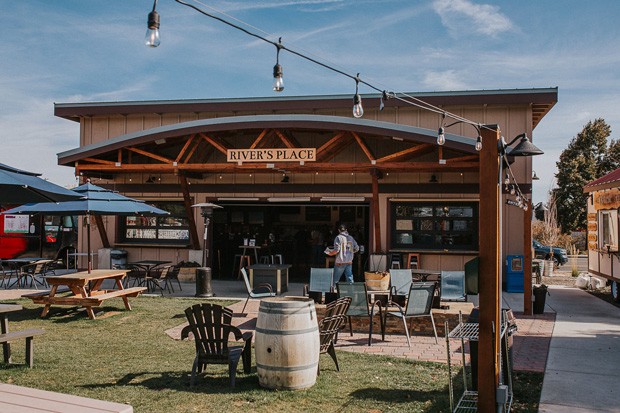 Trowbridge owns the bar inside The Podski, the food cart lot tucked into a cozy spot at 536 NW Arizona in the Box Factory district. The Podski's reputation as a cool, low key hangout doesn't dim in the cooler weather months; in fact, it may shine even brighter. That excitement for the cold seems to be running rampant.

"We have lots of fun things to keep people happy during the wintertime," explains Jessica Swartz, co-owner of River's Place Tap House and Food Cart Yard located on Bend's east side. Along with the 9-foot gas fire pit outside, there's central heating inside the spacious building with garage doors that close completely, making it a "little like a restaurant experience," according to Swartz, who owns the place with her husband, Paul Shorey. There's also a cozy corner inside with live music every Thursday—and sometimes Fridays and Saturdays. Bingo, trivia, big screen TVs and a Beer Nerd series also keep the good times rollin' when the temperature drops. Cold weather also means more dark beers on tap. Swartz loves to brag on the River's Place food trucks serving up everything from hot, messy sandwiches (Hogan's Hoagie Stop) to Cajun shrimp and grits (Bluma's Chicken & Waffles).

Bragging seems to be a common thread in the food cart lot world; The Bite's Donni Davidson enthusiastically claims, "The Rogue Chef burgers are out of this world!" and "Rico's Tacos' green sauce is the very best in the land!" Those are two of the four carts featured at The Bite in Tumalo, another food cart lot ready for winter with live music every Wednesday and every other Saturday and a fire that's always burning. "I just love our town and the community of Tumalo, and we still need a place to gather when it's cold. It's fun to sit around the fire pit and get warm and have a beer," says Davidson, who owns The Bite with her husband Steve Davidson. 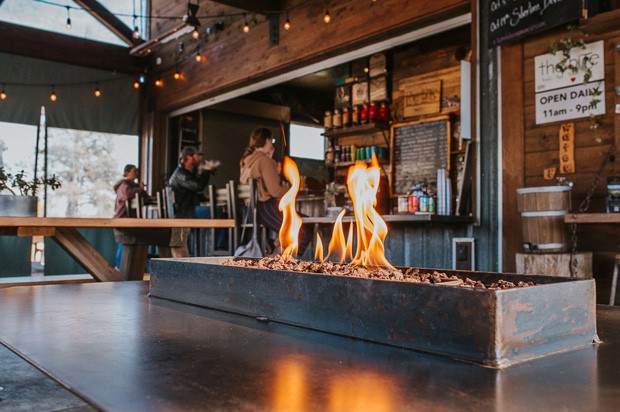 If fire pits and spicy tacos aren't warm enough, perhaps heated seats will be. David Staley invented such a thing. He's the owner of The Lot Food Carts and Taproom at 745 NW Columbia in Bend. As he puts it, "you get heat from above and from below" thanks to the high-up heaters inside The Lot's shelter, and the heated benches. The double-decker bus at The Lot, housing Fricken Faco, also belongs to Staley, who reminds everyone that people can get food from one of the other awesome carts and can head upstairs in the bus to hang out and stay warm. Staley likes keeping things consistent year-round, which is why The Lot is still open until 9pm seven days a week no matter the weather. It's also why Monday's Bingo for a Cause, Trivia Tuesday, Open Mic Wednesday and Live Music Thursdays never end.

If your favorite cart or lot isn't mentioned here, it's not because they're not bringing out the cold weather vibe; it's simply because we've run out of space. The moral of this story: Pray for snow and buon appetito!