Jackalope Grill serves up a dessert to test your patriotism 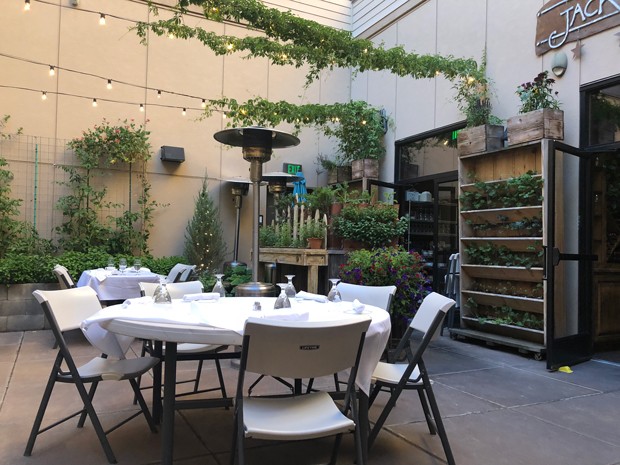 Surrounded by potted plants, trailing vines and garden boxes overflowing with yellow, orange and red nasturtiums, I sat outside in a private, interior courtyard nestled behind the Jackalope Grill downtown, with string lights dotted above me.

Since 2005, Timothy Garling has been chef and partner at the Jackalope Grill. The European-inspired restaurant with Northwest flair had humble beginnings in the Scandia Plaza strip mall off Third Street. After surviving the recent recession, the restaurant relocated to its current spot downtown on Lava Lane. You can't miss the entrance: tree branches covered with bright green lichen are woven together to create an archway around double glass doors.

I visited with friends who had dined at Jackalope Grill over the years, in both locations. They arrived a few minutes before 6 pm to score a happy hour cocktail. They ordered the daily $8 bartender's choice; on that night, a perfectly sweet lemon drop. If you want a cocktail and a bite before 6 pm, the happy hour menu is a great deal, with $5 wines and $6 well cocktails. Combine that with the $4 gnocchi al pomodori "San Marzano" and you have a light, fancy dinner for $10. I'll definitely be back for that combo. The potato gnocchi was light and fluffy and the tomato butter sauce with asiago and Pecorino Romano cheese was rich and tangy.

Alas, we weren't there to sit at the bar; we wanted dinner in the courtyard. Although the patio was rich with foliage, I was thrown off by the plastic folding chairs. Everything else in the restaurant was upscale, so they seemed a little out of place. 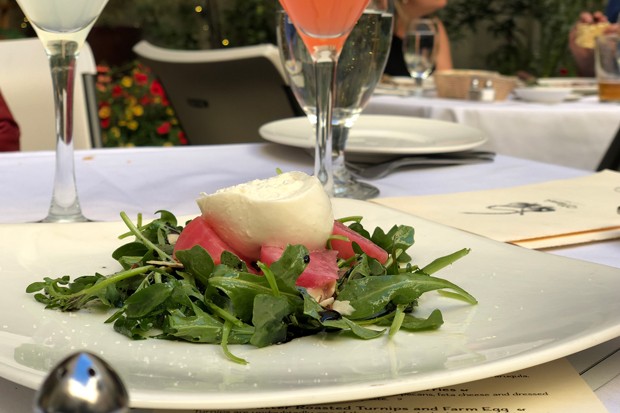 We started our meal by sharing the burrata with candy cane beets and arugula. When you cut through burrata, an Italian buffalo milk cheese made from mozzarella and cream, the solid outer shell oozes cheese and cream. It was delicious with the earthy, soft pink beets and peppery arugula. It could have used a little less balsamic dressing, but we sopped up the leftovers with warm, crusty Sparrow Bakery bread.

Because of my Midwest roots, I was drawn to the German Jaeger schnitzel, a staple on the menu since the restaurant's opening—and a rare dish on Central Oregon menus. When the beige dish arrived, I worried my choice was going to be bland. The portion of breaded, pounded pork was huge and was covered in a tan mushroom sauce. Hidden underneath was a potato pancake, braised red cabbage and broccoli. To my delight, the mushroom sauce was velvety, bright and tangy with the crispy pork. The potato pancake had lots of yummy crispy bits and an unexpected but delightful hint of caraway. The red cabbage was the counterpoint the dish needed to balance all the rich flavors.

With room for dessert, we shared the tiramisu, chocolate pot de creme and the apple tarte tatin. The tiramisu had a great coffee flavor, enhanced by a sprinkle of crunchy espresso bits, but the majority of the dish was the mascarpone cream. The chocolate pot de creme was good, but honestly, I was distracted by the white paper doily underneath the bowl. Historically, doilies were used during formal dinners to cover a dessert plate when a finger bowl with water was placed on it. Diners would dip their napkin in the finger bowl to clean their hands after dinner. With no finger bowl ritual, the doily was out of place.

The highlight was the tarte tatin, a dessert made like an upside-down cake. Layers of thinly sliced apples are caramelized in butter and sugar and topped with a puff pastry or pie dough crust. This is going to sound un-American of me, but the tarte tatin is the best dessert to feature apples—beating an apple pie any day.

With consistently good food, it's no surprise Jackalope Grill has survived for 13 years. The menu is layered with flavorful classic dishes including rack of lamb, filet mignon, osso bucco and cioppino-style seafood pasta. The cocktails are on point, the happy hour is great and Chef Garling sources locally.