Will smoking weed find you a partner? 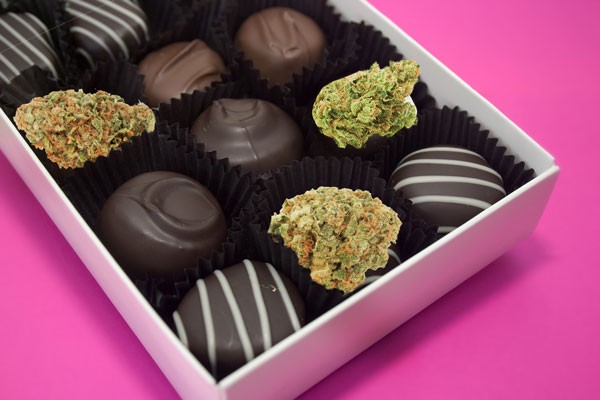 It's fairly subtle, so you may not have noticed, but this week was Valentine's Day! A "holiday" of realistic expectations and endless possibilities for bitter self-recrimination about love lost.

Be it canna-infused chocolates or lubes (note: don't mix those up), cannabis plays a growing role in industries built around love in its many forms. But what about the way it's used and perceived getting there?

When you began "wooing" your romantic partners, alcohol was most likely involved. Many relationships have started around alcohol consumption. It's called a social lubricant for a reason.

Then there's cannabis, which comes with a much more complex relationship to getting someone to go home with you, and maybe having them stay. Not just for the physical aspects that can be off putting: smoke, smoker's breath, rooms that reek hours after consumption, bong water and so on. But the decades of prohibition's mass misinformation campaign have left many people with mixed feelings about cannabis use, and for some, those who use it.

"Out of 101 bad dates, maybe 20 percent are smokers." The other 80 percent? "Douchebags who work at Nike and drink, resulting in cross fading when they partake," she laughed. "Guys don't smoke—really smoke—in Portland. tweet this

Being a cannabis user can be a deal breaker for some, based on associations they've had with previous partners who fully embraced every mainstream stoner stereotype. Or having a religious upbringing that instilled guilt about cannabis, along with everything else, anywhere, ever. Others may have had a partner or parent who used cannabis as a way to deaden feelings, avoid intimacy or reinforce existing emotional walls.

With legalization comes greater acceptance of the role cannabis can play in courting, and cannabis does have a history for many of a shared joint turning into a shared kiss and more. It's started relationships, saved marriages and resulted in some babies. Like attracts like, and there is great potential when couples merge hearts and a fondness for good green.

I wanted to get some perspective on cannabis in today's dating world, so I reached out to a mid-20s cis female I know from Instagram. Her feed revealed she works in the industry, is a frequent and enthusiastic canna-consumer and while actively single, didn't seem to be having the best luck in love. She met me for a drink, but asked that I not reveal certain particulars, including an arm tat that should be a tee shirt line. She turned heads of both sexes when she walked in, and I asked what ratio of the men she dated were cannabis consumers.

"The boys I date, they make big noise about how tough they pull, how much they like to get high," she said, rolling her eyes. "Out of 101 bad dates, maybe 20 percent are smokers." The other 80 percent? "Douchebags who work at Nike and drink, resulting in cross fading when they partake," she laughed. "Guys don't smoke—really smoke—in Portland. When I get high, it's mostly with girlfriends. Pre (Measure) 91 was cooler, because smoking together was a shared law-breaking activity, dangerous and cool, " she sighs. "When I met my ex, we went home to smoke, shared three blunts and he passed out. It's like a unicorn to find a man with a job, car, his own place and he can hang for a full session, instead of one dab hit followed by hours of paranoia and becoming too self-aware."

Will smoking find you a partner? No, but it can ease the journey while you try to find them.