What narratives are (under) represented in an outdoor mecca like Bend? 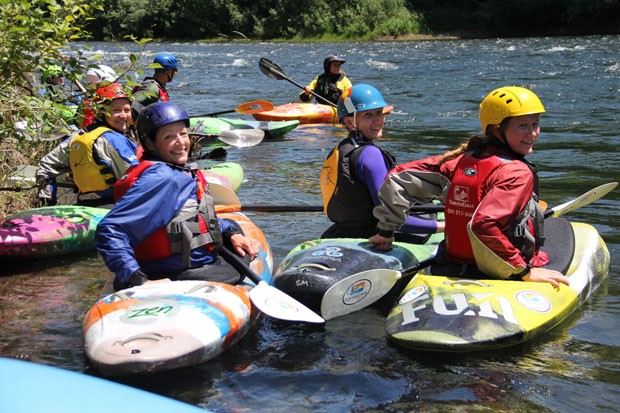 En masse, we suit up and slide off the shore just above the Bend Whitewater Park passageway—five women tricked out in combat kayak gear, lining up to run the terraced lava rock drops of the bypass channel. I've never ridden rapids surrounded by so many women— and no men, on a kayak, raft, paddle board or otherwise. I'm enrolled in an all-women's whitewater kayaking weekend. It's magical. These people have bodies like me and are overcoming some of the same fears. As the river pulls me closer to the first drop, I would be nervous for myself, but my eyes are locked on the woman in front of me.

If she needs a rescue, I better be ready.

So I took an outdoor sports class with all women. So what?

On a weekly basis I digest a lot of media oriented around social justice, feminism and the outdoors—yet I don't often see these topics coalesce on more than a surface level. Central Oregon's outdoor narrative is typically like this: Bend is an outdoor mecca. Outside magazine said so. They all lived happily ever after. Full stop.

But for women, the narrative is complex.

The not being taken seriously sentiment

To dive a little deeper, and to get an idea of the participation and satisfaction levels of local women in the outdoors (Are they really living happily ever after?), we set up our own survey and advertised it on our website, in our paper and on our social media channels. Fifty women responded to most questions.


Women's responses included concerns about not being taken seriously by male staff at retail locations; clothing unfriendly for people with hips, breasts and beer bellies; the stigma that women are not as fit or capable as men; having to circumvent "the old boys club"; a lack of women's gear stocked in stores (even if brands actually made women's gear); a lack of a network to borrow gear the way males do—making cost a more prohibitive variable; lack of opportunities for women to get involved on a deeper level with their chosen outdoor hobby; a desire for a culture more willing to answer questions about gear and gear maintenance; and finally, concerns about equal pay in the industry.

The concern of being taken seriously pretty much sums up the rest of the grievances listed.

To boot, in a 2017 National Study on Women and the Outdoors, REI found that six out of 10 women felt that men's interests in outdoor activities were taken more seriously than women's. In our local survey, 30 of 45 women who responded said the level of "respect for all levels of participation in an outdoor sport" was "unsatisfactory."

If the assertion that women aren't taken as seriously as men in the outdoors is true, the other grievances make sense. Of course there aren't clothes that fit; of course there's a lack of opportunity.

What is "outdoorsy?" and who gets to claim the title?

This not taken seriously sentiment is reflected acutely in the way women on the margins of the outdoor industry view themselves. In the course of interviewing women for this article, I talked with several mothers who claimed they were not "outdoorsy." However, by the end of our conversations I had discovered they did sports outside with their children constantly. One mother jogged outside daily with her child in a beefy stroller—yet didn't feel justified in calling herself "outdoorsy."


Attending a secret Women's Ceremony at Trout Creek Ranch recently also clarified the notion of respecting participation for all levels. Mothers and daughters bravely charged the treacherous 3-mile gravel unimproved road in RVs. Other elders slowly and deliberately trekked back and forth a quarter mile each way with their walking sticks to our ceremony site. Many of them didn't view themselves as "outdoorsy," but seemed to credit me with that title because I had arrived with a paddle board strapped to my roof rack.

It seems like the anecdotal negative feedback loop goes like this: Women don't feel their presence in the outdoors is taken seriously, thus, they don't take themselves seriously.

Half-way through the course, I discovered another student had many years of kayaking experience. She had paddled the Wild and Scenic portion of the Rogue River and the entire Grand Canyon. She even performed a kayak roll multiple times in the class—far and above the achievements of the other intro-level students. She wanted to take the course because much time had passed and she felt rusty. Unabashedly, I followed her around on the water and told her how impressed I was with her roll and the multi-day bucket list trips she had already ticked off. She always brushed off my praise by slighting herself, saying, "We'll see if I can get the roll when it matters," or " That was so many years ago now."

Closing the chasm between participation and leadership

Nationally, statistics gathered by the Outdoor Foundation show that 46 percent of outdoor sports participants identify as female. The percentage of women working in the industry at an entry level can be up to between 50 and 60 percent. Yet looking at demographics moving up the leadership ladder, numbers taper, explains Deanne Buck, executive director of Camber Outdoors (formerly the Outdoor Industries Women's Coalition). Between 10 and 20 percent of senior-level positions are held by women, and this statistic holds true beyond the outdoor industry. "Women in the Workplace," a 2016 Wall Street Journal report by Sheryl Sandberg (Facebook chief operating officer and author of "Lean In"), showed that women accounted for 18 percent of C-level employees.

Of those who responded to our local participation and satisfaction survey, 24 percent reported being an executive at the outdoor company they worked for—at the high end compared to national stats, but still not representative of participation.

It seems the gap between participation and representative leadership at the decision-making level is leaving the outdoor industry at a loss to the diverse narrative of women in the outdoors, i.e. see the unsatisfied grievances list.

To someone who hasn't experienced it, not being taken seriously by male staff at retail stores or not being able to find gear that fits appropriately might not sound that discouraging. But added up, over a lifetime, day in and day out, these microaggressions aggregate and amplify. As a business owner, if you haven't yet tuned into this market share, just imagine all the dollars you're missing out on as slighted females with disposable incomes exit your premises, wallet intact.

Melodramatics aside, women in the outdoors need male allies like we need gear that fits our bodies. In our survey, we asked women about their reasons for getting into outdoor sports. Many local women mentioned fond memories with their fathers, boyfriends and other male mentors as a catalyst.

Debbie McKeown says if it weren't for her brother's urging in 1976, she wouldn't have been the first female semi-professional guide rowing the Rogue River. "At the time, I was such a novelty. People would take pictures, and I wasn't sure if people were taking pictures because I am a woman rower or because I was in a bikini," she said.

"There was a real stigma, like women were not strong enough to handle it... A lot of the Pacific Northwest rivers are technical, and much skill is required." McKeown noted that women tend to row with good technique because—spoiler alert—they aren't always as strong as men and thus can handle Northwest water quite well. McKeown believes women have a tendency to be very good at a lot of aspects of rafting, like gear maintenance and reading water.

If outdoor companies opt into the benefits of equally representing women at the executive level in outdoor companies, having men who are willing to encourage, listen and advocate for the diversity and legitimacy of all the female outdoor narratives would also be a paddle stroke in the right direction toward happily ever after.

Sitting in the eddy, we all listen to Tina McKeown, a rower, a retired professional kayaker and the executive team HR director at the water sports company she works for. Waving her paddle like a magic wand, she breaks down the finer points of bracing to avoid a kayak flip. She explains the same technique in multiple ways, every time with a robust and genuine smile. She answers the same question over and over, never a break in the joy she radiates. Her explanations and patience work. She reaches every woman. Every age, every concern and every diversity is accounted for. Only one of the students flips and swims the entire day—no small miracle with six beginners.

To view all the results of the Central Oregon Women in the Outdoor Industry Survey (2018), check out this link. 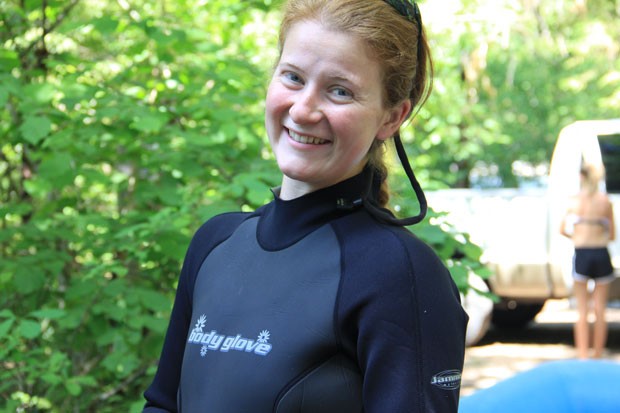 The Gear Fix Periodic classes in a range of outdoor fields, gearfix.com/