Located in downtown Redmond (in what used to be a church built in the 1940s) you'll find Central Oregon's newest music venue and creative space, the High Desert Music Hall.

Created to be a hub for music, art, food, entertainment and community, the Hall hosts its first concert this Saturday when Blackstrap Bluegrass takes the stage. The venue already has a steady lineup of events booked through the summer, including music from G-Bots & The Journeymen, The Jess Ryan Band and Company Grand, as well as comedy delivered by Carl Lee. The Hall also hosted the Dry Canyon Arts Association's Art at the Music Hall this past weekend, along with its very first open mic night on May 29. Plus, there will be many more events to be announced as the year unfolds and the Hall gets its footing. 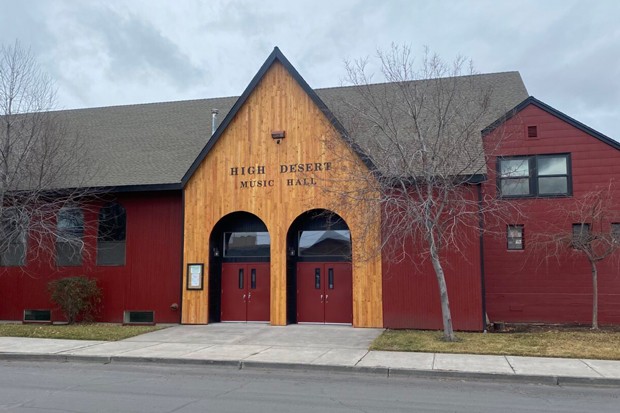 Local musicians say having a new indoor space for music in Redmond is an exciting prospect.

"The High Desert Music Hall is a beacon of hope for the music community and for Redmond as a whole. Growing up in Redmond there wasn't a lot for us to do, which led us into loads of trouble," says musician Jeshua Marshall. "Seeing Redmond grow in such a positive way gives me so much hope for the next generations of my hometown. Support this venue as much you can!"

A project started and led by musician iLko and artist Terkwoize two years ago, the Music Hall is finally able to open its doors following multiple renovations on the building—on top of all the logistical headaches that came with the pandemic. Located on SW Forest Avenue in downtown Redmond, the new space comes equipped with a bar, accessible balcony, a main stage and so much more. The Hall also offers a 100% plant-based menu as part of its mission to bring healthy and sustainable meal options to the community.

Not only will the Music Hall serve as a venue for live shows, but it's also home to the Backline Lounge, which iLko detailed in an Instagram post as being "a neighborhood style gathering spot and lounge" that also features a smaller stage. iLko finished by saying all the labor put into the community-focused bubble being created at the Hall has been more than worth it. "This has been the most ambitious rollercoaster of a project I have ever been a part of. Seeing it come to fruition has brought more pride to my soul than I could have ever imagined."

Follow the Hall on Instagram @highdesertmusichall to truly appreciate the labor of love that was put into the new spot, and find tickets to its ticketed shows at bendticket.com.