A few select beers took home titles in our Best of Central Oregon readers' poll. These are some of the others that readers voted for in big numbers

If you've read the rest of this issue, then you've likely already seen the winners that took home titles in categories such as food and drinks—which of course includes beer categories. "Down list," however, are some other brews that got a lot of votes... just not enough to make the podium. Below is an ode to some of the beers that readers continually vote for; beers that you, too, may want to check out sometime soon. Some of the beers mentioned here are seasonals, so not all may be available right at this moment. 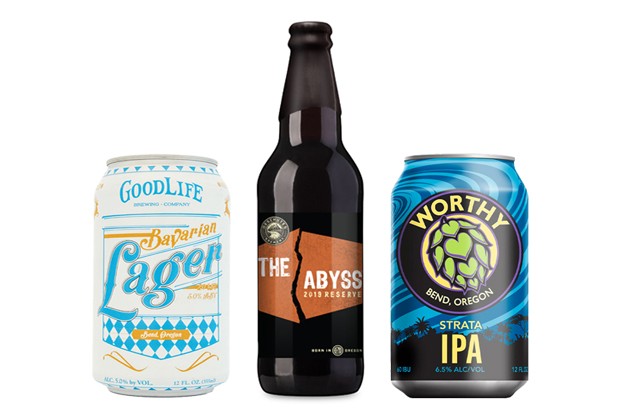 Deschutes Brewery's The Abyss is a beer unto itself. It's a barrel-aged brew that can really pack a punch. With an 11.7% ABV in the 2020 version of this imperial stout, it's one best shared with friends—or by the snifter. Part of Deschutes' reserve series, but generally available year-round.

The Black Ace Cascadia Dark Ale from Bevel Brewing is a roasty, hoppy dark beer—part of the CDA movement that we're totally here for. This one packs a punch, too, at 7.6% ABV. Currently "On Deck" at Bevel.

Nut Crusher Peanut Butter Porter from Wild Ride Brew is one of the Redmond brewery's year-round brews, and for a good reason. People love the chocolatey, caramely, peanut-buttery flavors of this tried-and-true brew. ABV 6.0%.

GoodLife Brewing Company's Sweet As Pacific Ale is as ubiquitous in Central Oregon as the pine trees. It's been a favorite around these parts since the olden days when it was one of the only ones in cans, and readers voted it their favorite light beer for that and many other reasons. Coming in at #2 in the 2021 Source Weekly Best of Central Oregon readers' poll was Crux Pilz from Crux Fermentation Project. These other beers got lots of mentions, too.

King Krispy Pilsner is Deschutes Brewery's German beer-inspired effort, and took home plenty votes in our Best Of this year. Two of Deschutes' brewers got a trip to Germany after winning the 2019 Bitburger Challenge—hosted by Bitburger beer—which pitted four Washington brewers against four Oregon brewers in creating a German-style pilsner that was not on each brewery's standard line. Thanks for the street cred and the new beer, Deschutes. 5.0% ABV. Available seasonally.

Goodlife Bavarian Lager is a German-style Helles lager using European and U.S. hops. Light and drinkable, it's yet another light beer that readers of the Source ranked high. In these hot and smoky times, it's totally crushable. 5.0% ABV.

Having won it a total of nine times, it appears that Source readers are resoundingly in love with Boneyard Brewing's RPM as its fave IPA. Coming in second was Sunriver Brewing's Vicious Mosquito IPA—another fan fave. Some other IPAs ranked high, too.

Worthy Brewing's Strata IPA is described in a press release as "an amazingly well-balanced beer with a unique, "terpelicious" aroma." (Props to the writer's use of the word "terpelicious" in a sentence!) The beer is named after the Strata hop, developed by the wizards at Oregon State University and Indie Hops, which makes an appearance in the beer, along with Meridian and Nugget hops. Hopheads are loving it. 6.5% ABV.

Bend Brewing Company's Tropic Pines, a stalwart for BBC, also ranked high among Source readers. With its piney flavors and notes of citrus and other fruits, Tropic Pines packs a flavor punch. 6.5% ABV.