Long-planned efforts to improve US 97 at Bend's north end have moved a step closer to construction with a $60.4 million federal grant.

The project to reroute US 97 on the north side of the city will complete the final segment of the Bend Parkway. The money from the U.S. Department of Transportation's Infrastructure for Rebuilding America discretionary grant program goes to the Oregon Department of Transportation. ODOT and local agencies are planning a series of changes as part of the total project, estimated at about $325 million, that include: 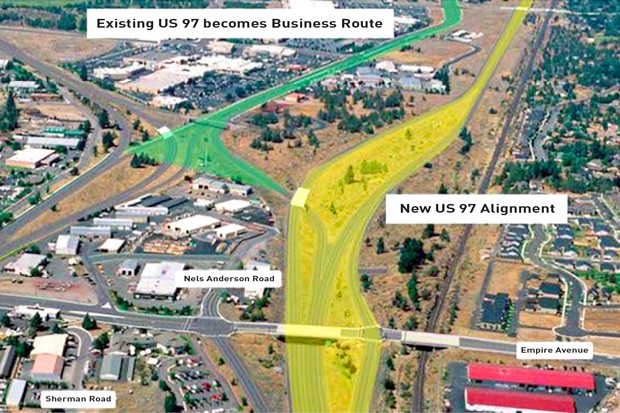 • Realigning US 97 east of its current location, from Empire Avenue to about a half-mile north of Cooley Road and Lowe's, and making that existing stretch a city street

• Improving and grade-separating Cooley Road from US 97 and the BNSF railway, so that the traffic flow can continue on the roads and railway without disrupting each other

• Building a new roundabout intersection between US 20 and Cooley Road

The federal grant money must be under contract by fall 2020. A process will soon begin deciding where the $60.4 million gets spent, and ODOT Spokesperson Peter Murphy expects those conversations to start soon. Construction likely wouldn't start until 2021. State legislation in 2017 dedicated $50 million toward improvements at the US 97 and Cooley Road intersection.

"It's going to be very busy times," said Deschutes County Road Department Director Chris Doty, who noted that city, county and state portions of the project will now proceed. "It's go time for the County and the City on parts of the project we committed to build."

“A much more freely flowing system…That’s the game plan.”— Peter Murphy tweet this

Along with city officials and other area representatives, Doty helped advocate for the project in Washington, D.C. in May when the group visited Oregon's congressional delegation and the U.S. Department of Transportation.

Those involved with the project expect various benefits from it.

Deschutes County Board of Commissioners Chair Phil Henderson noted that those passing through, or commuting between Bend and Redmond, will have a straight route. The project will ease congestion that can get especially bad when tourists hit the region at certain times.

"It's a bottleneck now," Henderson said.

Bend City Councilor Justin Livingston noted that lands around that area could then be developed for residential and commercial uses—development that has been restricted due to the already-congested roads and the limits on further burdening intersections with traffic from new development. Livingston called the project "very transformative" for the area.

"The lack of capacity at the north end has stymied development," Doty said. And he pointed to the need for a less-congested US 97 for use as a lifeline in case a Cascadia earthquake and tsunami ever occurs.

Deschutes County contributed $5 million toward the effort, part of the grant application that helped show local involvement and funding. The grant process factored in local funds and local work related to the project. For instance, the county plans to build Hunnell Road to connect Cooley and Tumalo roads, since parts of Hunnell are now dirt and gravel. Doty expects that project design to finish by fall 2020 and construction could start in late 2020 or early 2021.

Of the federal grant funding for Central Oregon, Doty said, "I can't think of one that's much bigger than this."