The naming of the Oregon Rubber Road Snake 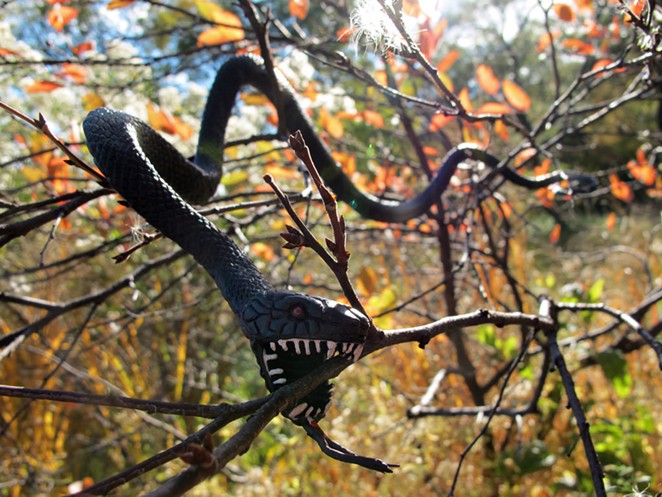 Some years ago—June of 1998 to be exact—while my family and I were traveling through Klamath County on a Great Gray Owl banding expedition with Tom and Casey Rodhouse, we discovered a beautiful specimen of a Rubber Road Snake, flexilius robustus oregonius.

As far as I can find, this snake has never been described in the scientific literature; even Al St. John, Bend author of "Reptiles of the Northwest," missed it, as did Ed Park, famous wildlife writer and photographer in Prineville. Fearing a lost opportunity, I took the liberty of giving it a scientific name.

I do not feel at all uncomfortable with providing a new scientific name, as early paleontologists such as Othniel Charles Marsh and Edward Drinker Cope did it all the time when they dug up a new piece of dinosaur fossil they had never seen before.

Marsh taught at Yale University, served as president of the National Academy of Science, and was a good friend of both Charles Darwin and Thomas Huxley. Cope, who enjoyed a large inheritance, used his fortune to support extensive paleontological fieldwork in the West. His 1,500 publications powerfully shaped American paleontology.

Those two guys named new Genera from just one bone, and the entire scientific community swallowed it hook, line and sinker (even though they sometimes placed the wrong head on the wrong dinosaur). Therefore, I see no problems with my work — shucks, I've seen entire skins of Rubber Road Snakes, all of them already eviscerated.

Please don't get me wrong; I am not placing myself in the same league as the illustrious Cope and Marsh. No, sireee, I'm just a lowly naturalist, and to make that even less imposing, in my case, a naturalist is a biologist who flunked math and chemistry.

Nevertheless, revealing the discovery of flexilius robustus has not been taken with any degree of frivolity. What promoted my decision was the insistence of my daughter, Miriam (a U. of Montana geology grad, now a mom, living in Phoenix, with two lively sons and a husband who's the best cook I ever met). Over the years she's been asserting, "Dad, we can't keep this to ourselves, we owe it to science!"

Take a moment to ponder my dilemma. Had I just off-handedly reported our discovery in '98, there is no question that I would have been put under great scrutiny by the Highway 97 Wildlife Watch Society (H97WWS).

As you may know, H97WWS is constantly monitoring the crises of mauled and mutilated mule deer along the entire Highway 97 corridor, and questioning everything devised to prevent further wildlife fatalities. (I heard the society was responsible for putting up that deer-proof fence between Bend and Sunriver.)

Nevertheless, I think enough time has passed; in addition, I've seen the remains of these animals flattened along other highways—as I'm sure you have as well.

While traveling south on 97, we saw the remains of two Rubber Road Snakes between La Pine and Crescent that day, but did not stop as they were too badly damaged by being repeatedly run over. And as I'm sure you know, stopping—or even slowing down—on Highway 97 can be hazardous to your health.

As we approached the boundary of the Winema National Forest alongside the Williamson River Road, my daughter, Miriam, suddenly shouted, "Stop! I think I see a snake!"

Of all the comments I hear while on an outing, nothing will bring on the possibility of a rear-end collision faster than one like Miriam's outburst. I have driven off the road into ditches and all kinds of weird places to avoid being hit in the rear while complying with, "Stop! I think I saw...."

This was no different. "There! See it?" Miriam said, unfastening her seat belt and leaping out the window.

Yes, there it was: a beautiful specimen of a crosshatched flexilius robustus oregonius (Anderson) lying just off the pavement on the cinders. The reason Miriam spotted it so quickly is that the black variety of flexilius is much easier to see than the red and brown races.

In as much as the Rubber Road Snake is eyeless and usually gets run over because they don't know where they're going, they sometimes resemble a flat piece of rubber with a variety of patterns on their back. I must warn you! If you see one fly out from behind a truck, NEVER stop and pick it up! Just stopping on Highway 97—with or without a snake sighting—will no doubt qualify you for a stern warning from H97WWS.

Over the years, it's plain to see how the Rubber Road Snake has been evolving into a much larger animal. The other day I witnessed one of the black species being killed by a huge 18-wheeler. There was a big "bang!" and the snake went flying out into traffic. I didn't stop as the traffic was too heavy, but as I passed it I could see how the snakes have evolved into resembling the remains of a shredded truck tire.

As you can see in the photo, the specimen Miriam spotted is a healthy adult. Unfortunately, it is impossible to determine a male from a female Rubber Road Snake, as they are both usually flat by the time we see them.

In closing, if you should see a Rubber Road Snake along Highway 97—or any of Oregon's highway for that matter—please find a safe place to pull over and take a photo of the specimen. DO NOT collect them; ODFW requires a "take" permit to do so, as they are a protected species, and H97WWS will cite you if you are found with one (or more) in your possession. Be that as it may, if you see one, do not hesitate to call Flat Stanley or me if you need assistance.