Whether on or off the rink, local teen hockey players are demonstrating not only exceptional athletic ability, but also a commitment to personal growth and character development.

One local organization helping young people with these goals is the Bend Bullets, whose name is an acronym for "Better Understanding Life Lessons and Expectations Through Sports." 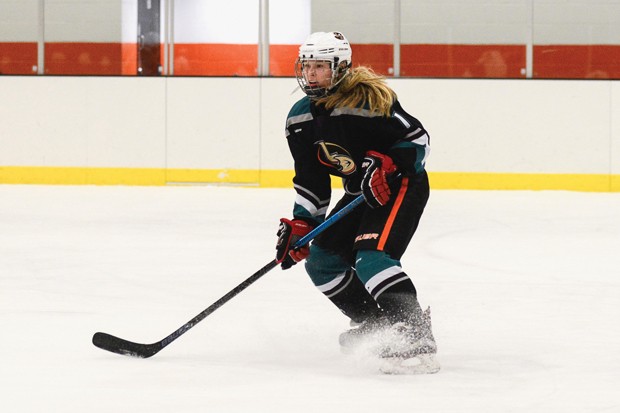 Launched in 1994, the Bend Bullets is a non-profit amateur hockey organization whose goal is to provide accessible kids' sports opportunities in ice and inline hockey, while also teaching invaluable life skills.

Although the Bend Bullets have had many homes over the years, from the outdoor skating rink in Juniper Park to the Rock Rink and Roll skating rink along Greenwood Avenue to Cascade Indoor Sports, they are now settled at the open-air, NHL-sized rink at The Pavilion.

There, they offer a range of year-round introductory and more advanced roller hockey programs for children ages five through 14 through the Bend Park and Recreation District system. Youth participants learn proper techniques and fundamental skills, such as skating, stick handling, passing and shooting from professional, accredited coaches who have played at the highest levels of hockey.

The grassroots Bend Bullets development program aims to grow the next generation of hockey players here in Central Oregon. And as one of the longest running inline hockey programs in the country, current Bullet families sometimes even meet other people in the community who used to be Bullets themselves when they were kids, making for an inter-generational chain of hockey enthusiasts.

One such local hockey family is the Aces. Tony Ace played hockey as a goalie in Alaska, before introducing his daughter Lexy, now 16, to the sport when she was seven years old at the Cascade Indoor Sports rink. Ace began with roller hockey and soon fell in love with the sport, later learning to skate on the ice as well.

During her time with the Bend Bullets, Ace practiced four times a week for an hour or an hour and a half over her summer break, and even did extra private lessons at 6am before school. She also did dry land training at the BOSS Sports Performance training facility, which focuses on weightlifting and agility practice.

Her athletic commitment has paid off in spades, as Ace is currently training at an exceptional boarding school in Minnesota called Shattucks Saint Mary's, which attracts talented teen athletes from around the world. She's even competed internationally as well, at high-level tournaments across Europe.

"My first year was in Italy when I was 13," says Ace. "I played for Team USA Jr. Women's roller hockey. We didn't do too well but it was a fun experience. We played all these teams like India, Colombia, and a couple of others. Getting the trade jerseys and talking to all these new people was definitely an experience! The following year I played in Spain for the World Roller Games. In that tournament we ended up taking second and losing to Spain, but that was a great experience overall. I was supposed to go last year to Colombia but with COVID it didn't work out. I hope to go next year and keep working my way up to the senior women's team."

Inspired by professional hockey players like Drew Dowdy from the LA Kings and Hilary Knight from the USA Women's Hockey Team, as a child, Ace dreamed of making it all the way to the Olympics. In the meantime, her primary goal is to continue her hockey career in college, where she hopes to earn a D-1 athletic scholarship to help pay for her education.

"Getting a D-1 scholarship would mean a lot to me because I've worked so hard these last years and a lot of people have believed in me," says Ace. "Just to give it back to them and my dad would be awesome."

Beyond skating, hockey has allowed Ace to meet new people and create a solid community here in Central Oregon. "On the Bend Bullets I've met my best friends," says Ace. "Growing up with them, they're all like my family now. That's definitely the best thing to come out of hockey other than college opportunities now."

Her early introduction to hockey has helped influence Ace's life in other positive ways as well; "[The Bend Bullets] are about pushing us to be good people off the rink, that's always their main goal," says Ace. "Good sportsmanship, having these friendships with other people and transferring life goals on and off the rink."

In true Bend Bullet fashion, Ace is committed to paying forward the mentorship and support she received as a child to the next generation of players.