Hockey in Bend: A First-Timer's Story 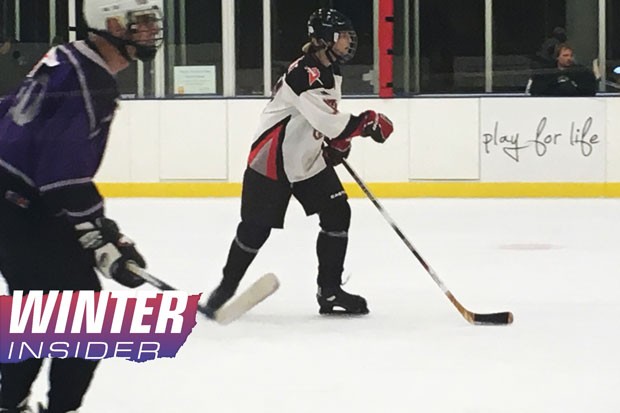 The last time I played organized sports, I looked up at the scoreboard at the end of the game and asked my team, "Wait, are we Away or Home?"

I clearly wouldn't consider myself "competitive," nor would I say I am very "good at sports"—but there's a place for everyone in Bend hockey. My boyfriend has played his whole life, and as a big fan of the sport, I decided to try my luck at playing.

Bend Park and Recreation District opened The Pavilion in December 2015. Local hockey players had been playing in Sunriver for years, but the new rink meant players could now play on a regulation-size rink—a first for Central Oregon. Today, the ice rink is in high demand, with adult and youth hockey leagues, lessons, curling and figure skating all competing for ice time.

The adult hockey league continues to grow. In the first year, there were 16 teams and 225 players. Last year, hockey expanded from three leagues to four, with 20 teams and 303 players.

The D League, or Deschutes League, is considered the beginner's league and is a mix of people from many backgrounds, ages and genders. So far there's no women's league in Bend, but dozens of women play at all skill levels and experience.

As someone who had never skated, learning to play hockey was pretty hilarious, to say the least. I got a penalty last year, but it was really just because I was about to fall and dragged another player down in an attempt to stay on my feet.

You'll regularly see people using the walls to stop, running into each other and attempting to do something (anything) with the puck. But luckily, we never do any of that quickly.

Our league only has two teams, so we played each other every single week. It might sound silly, but we're all learning. There are different levels of competitiveness on both teams; we have everyone from super competitive to... me. My team included a middle school teacher, a former Indiana speedskating champion, a few guys who had played roller hockey their whole lives but had never been on ice skates, and plenty of others. A lot of parents play when their kids join the leagues.

By the end of the season, I think we had all improved quite a bit. A lot of players will move up to the C league this season, but I'm pretty cozy down in the D League (and hey, maybe I'll be the best this year! One can hope).

The best thing about hockey is the community. I cheer my boyfriend on in the A league. He and his teammates cheer me on in the D league. Silver Moon Brewing is there with a beer cart four nights of the week, and players hang around and have a beer to watch other games. We cheer each other on, we size up our competition, we talk about how amazing we played, and we make new friends off the ice.

The adult league has sold out for hockey this year, but BPRD created a short lunch session league to begin in January. The season is short—because the rink is outdoors—but starts Nov. 26.