Vegan options for the holidays

It is that time of year when there seems to be a steady stream of over-the-top meals where calories seemingly don't count and every extended family member or friend wants you to try their sickeningly sugary "famous sweet potato pie" or "grandma's buttered ham" that even Paula Dean herself wouldn't put that much lard on. Invitations to these types of dinners and gatherings are inevitable around the holidays and you won't be able to get out of all of them, but also, you have friends? Good for you! A family that wants you around? Sounds magical, but also suspicious. Ask if you can bring a friend, and a vegan one at that. I will help clean up and I won't overstay my welcome. If that sounds all right, go ahead and read along and I'll tell you what I would bring to the actual table.

Being vegan in today's world has gotten much easier. Countless vegan and plant-based companies turn out new products it seems like almost every day. Keep in mind that these vegan options are not perfect swaps for meat. Before I became vegan, I would try these "substitutes" and exclaim "this doesn't taste like bacon" or "how can this legally be called 'cheese'?" Well, Past Angela, it doesn't, and none of them (yet) will ever taste quite the same, but a lot of these do satiate the craving for when I am in the mood for a "meatier" portion of the meal. Here are a couple of my favorites that are not only flavorful, but festive and great for the holidays.

If you are looking for a roast substitute, this is one of the best ways to go. This product is made of the wheat protein (aka gluten) seitan. Seitan may be a new word to you, but this protein-dense food has been around for centuries and is often associated with Asian cuisine. It can take on many forms, but the consistency of seitan is similar to that of meat and so it can be a welcome addition to anyone wanting to enjoy a more substantial vegan dish.

This particular roast is meant to replicate a traditional style main dish that one might associate with the holidays. This particular roast includes a stuffing of sage, garlic, squash, mushrooms and apples on the inside. Field Roast does also have a couple more roast options—one of which has a hint of cranberries which would also be appropriate for a holiday dish. The roast holds its shape when slicing, which makes it much easier to heat and serve. Although the packaging does say that you can eat it cold, I am not sure why you would because that sounds very sad, but hey! Sometimes you just need to take a bite out of a cold loaf to get you through the day. There is no judgment here. I did not go that route, though. I heated up a pan with plant-based butter and let the slices get a nice char to them, and I did not regret that one bit. It was delicious. 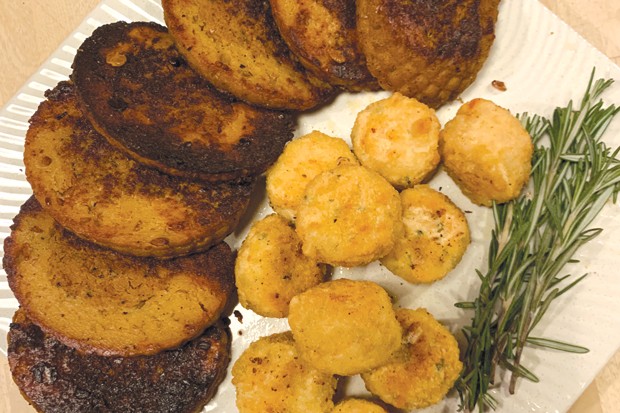 I first tried these at a Friendsgiving years ago and I remember being blown away by the realistic texture of these to the point that I rummaged through the trash to find the label of these magical crabless Cr'b Cakes. They are flaky, buttery, and have a subtle sea flavor that may not sound the most appealing, but it helps to create an air of authenticity to them that if they left that detail out it would be noticeable and very much missed. The cakes are also made from seitan, which gives them that flaky, but dense, crablike texture.


These mini savory cakes are great for appetizers or served as part of the holiday dinner spread. I baked these in the oven for a bit and then pan seared them so that they would get crispy on the outside. Using an air fryer for this dish would have been perfect. I don't have one, but from what I understand and gather from every other person on social media is that an Air Fryer would take these plant-based bites to the next level. If you don't have one, like me, then the oven or in a pan is just fine. Make sure the breading on the outside is nice and crisp, the inside is cooked, squeeze a little lemon on those bad boys and enjoy!