Home is Where the Art is ▶ [with video] | Local News | Bend | The Source Weekly - Bend, Oregon

Home is Where the Art is ▶ [with video]

In 2006, the City of Redmond's Community Development Department created the Redmond Committee for Art in Public Places, geared toward introducing art into select public locations and ultimately enhancing community identity. The committee is made up of volunteers; nine Redmond residents who were appointed by the mayor and approved by the Redmond City Council. RCAPP committee members have several responsibilities, including developing the City art collection, recommending program funding procedures and enriching the community by "bringing cultural and artistic values and artifacts to the City," as mentioned on the City of Redmond's website. 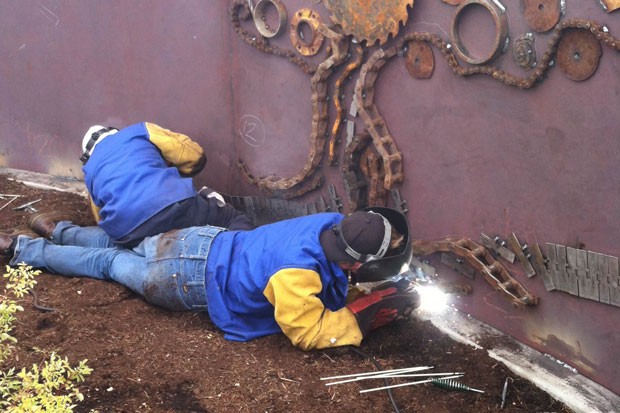 Dan Mooney, local photographer and current committee chair, explained his passion for promoting creativity throughout the community and providing local kids with the opportunity to express themselves artistically.

"Our board is completely volunteer based," he said. "None of us get paid, all of us are passionate artists. We collectively believe that bringing more art to Redmond will enrich our community. A lot of the projects we facilitate directly involve students from local high schools. Art programs are important across the board, but they can be especially beneficial to youth."

Jaclyn Abslag, staff liaison for RCAPP and programs coordinator for the Department of Community Development, detailed positive experiences associated with Art Around the Clock, one of the committee and City's ongoing projects. "This specific program began in 2010, four years after the art committee itself came to be. Right now we have a total of 18 sculptures throughout town that are all on loan, with a collective value of $189,000. Community members will vote for their favorite piece at the end of the two-year time period; our next vote will be in spring of 2021. At the end of the two-year period, one of the sculptures will be purchased by the committee based on the popular vote. We've had multiple artists that have donated their pieces at the end of the loan, too. I'll call them up and ask, 'Any chance you'd want to donate the piece?' And a lot of the artists say yes, that they're just happy to be a part of the program."

Abslag explained that while community response has generally been positive, some sculptures are not as well-received as others. "That's the best thing about art," she said. "It creates conversation. It gets people talking."

WATCH: Jackie Abslag and Dan Mooney discuss RCAPP and some of it's upcoming projects:

"If someone doesn't like a piece of art, I recommend joining the committee," added Mooney. "That's originally why I joined; at the time, there was a sculpture downtown that I felt wasn't the greatest. Rather than complain, I joined the board and did what I could to get it changed."

Not only do over 30 professionally created sculptures currently live throughout the streets of Redmond, but those who stroll around downtown will also notice a wide array of impressively painted electrical boxes and other student-created pieces.

"The electrical boxes have been painted by high school students, mostly, and some junior high students," Mooney explained. "They're owned by the City. We go to a local school, one with a good art program, and we work with the art teacher to come up with a design. Then we'll bring the students to the electrical box, usually four or five students at a time, and oversee the project."

Student art projects have become a major focus of the committee, and a donation has made facilitating these projects all that much easier. "We received a $20,000 cash donation from a local family," Abslag reported. "They stipulated that the donation needed to be used for student art, so we have quite a collection of student-created art around town. We worked with students from all three Redmond high schools on the Constant Face of Temporary Existence, a large metal piece. They conceptualized it, fabricated it, they did everything. There's a clock tower in Centennial Park, and local students made tiles out of clay that now surround the base of the tower. Their theme was 'The Past, Present and Future of Redmond.' There are some other tiles in the park made by younger students, elementary age. Right now we're waiting for the mural code to go through, which will allow for murals throughout Redmond. We're hoping the code will be changed this summer so we can begin working with different businesses and artists and get some more awesome art up around town." 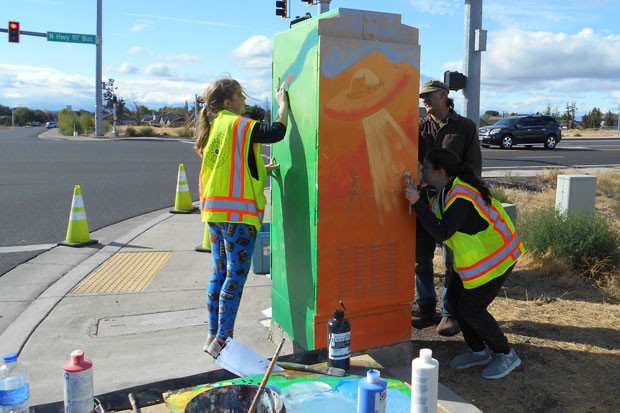 Currently, the mural code prohibits murals citywide. Both Mooney and Abslag are confident that the City Council will be receptive to the proposed change.

Mooney detailed several other student-based programs that had a (mostly) positive turnout. "We did a tunnel painting a few years ago with students that turned out great," he said. "Then we repainted it again two years ago, and it got tagged non-stop. Sadly, tagging has become a huge problem with the art here in Redmond. We decided to paint the skatepark here in town, kids could submit their artwork to be considered, so long as it wasn't graffiti-style. We ran the contest for three months, which was open to all students under the age of 18. We got over 30 submissions, which was great considering that kids had been out of school since March, which made them harder to get a hold of. The winners will be chosen July 2; there will be between 3-5 kids chosen as winners and their art will be transferred to the skate park walls. We have two professional artists facilitating the process. The City recommended that we kick off the skate park project with a more professional-looking painting, so that kids will be less inclined to tag it up." 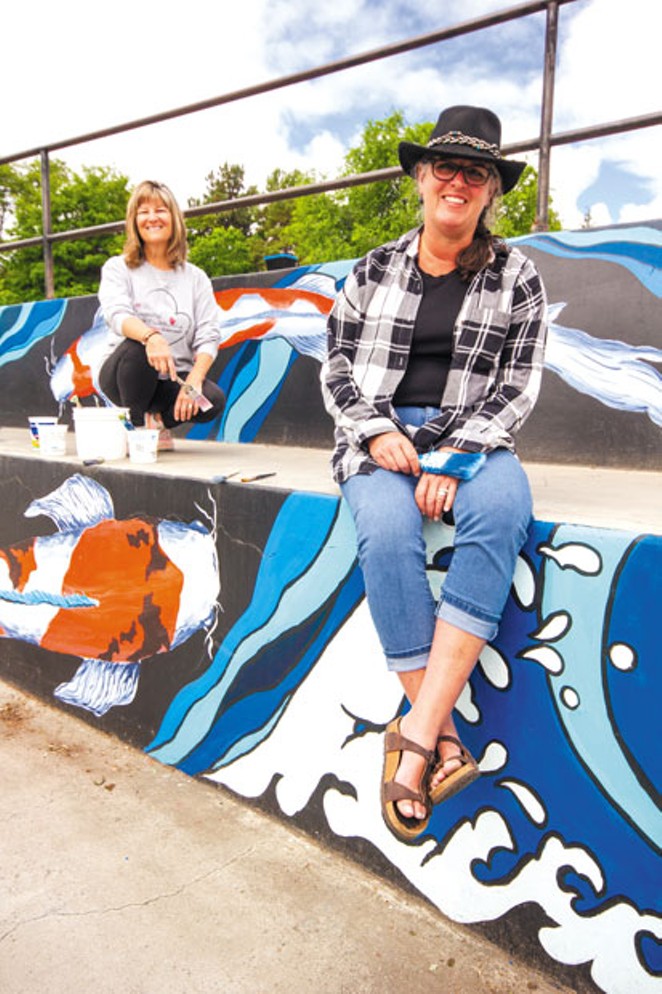 RCAPP is paying artists Tracy Thille and Kris Cranston as part of their Artist in Residence program. They painted a piece of art in the skate park titled "Balance," which features a Koi fish and will soon be joined by the other park murals, created by the student winners of the competition. "Balance" is the artwork featured on this week's Source cover.

"We're working with the City to find new spots on the north side and the south side of town," concluded Mooney. "We already have pieces throughout most of the town, one at the fire station, one at the library. We're going to put an art piece at the pump track next year. For this project we're going to hold another contest, similar to the one we held for the skate park. We'll have eight spots for kids to paint on. Of course, COVID messed up our plans and everything had to go on hold, but we have some really cool things in the works. One of the things we're focusing on is trying to get more local artists to participate. For Art Around the Clock we need around 16 or 17 submissions, and right now we only have three or four from local artists. We have submissions from New York, Delaware, Florida and even Canada, but we'd love to feature more Oregon-made art. Hopefully, Pacific Northwest artists who are reading this will submit their work!"

Permits Required: How's that Going for Ya?