The City of Bend plans to remove the people who live on Juniper Ridge, but where will they go?

Eviction is sometimes caricatured as a cruel act by fat-cat landlords, pushing low-income families out into the bitter cold in the dead of winter.

But what happens when the landlord is the public itself, in the form of the City of Bend, and the people being forced out already live outside? 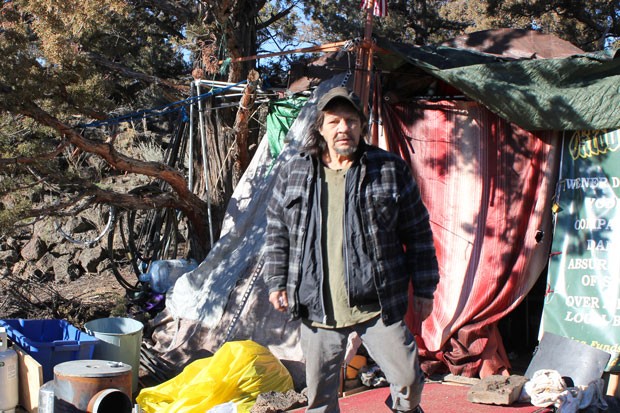 During the Feb. 5 Bend City Council meeting, the City's attorneys presented a draft of the policy they wrote to remove the people living in 50 or so camps scattered throughout Juniper Ridge on the northeast side of Bend.

The City is building Phase Two of the North Interceptor Sewer Line Project that will eventually connect a sewer pipe from O. B. Riley Road from the west to the Bend Water Reclamation Facility to the east. The City wants to start constructing the part that runs through Juniper Ridge in April, and City leaders say, for safety reasons, the people living near the planned construction need to move.

The City Council tasked City attorneys with creating a "humane" policy, due to, according to the draft policy documents, the "social nature of this complex transition." The draft states that police will give the people at Juniper Ridge 60-day, 30-day and 24-hour notices to vacate the property before forcibly removing them. The policy also states the City will "allow outreach workers to visit the camping site where a notice has been posted to assess the need for social service assistance in arranging shelter and other assistance."

While the policy applies to all 1,500 acres of the City-owned land, Assistant City Attorney Ian Leitheiser said he was not able to provide a clear answer as to whether this means the City will just enforce the removal near the construction area, (and allow people to simply relocate farther north onto the additional 1,000 acres of Juniper Ridge) or if this means they'll be forced off the entire property.

“The HLC opposes the posting of eviction notices until adequate low-barrier housing or shelter has been made available to all those living at Juniper Ridge.”—The Central Oregon Homeless Leadership Coalition tweet this

"Managing a property as vast as Juniper Ridge is time- and labor-intensive, and we always need to make choices about how and where to apply finite resources," Leitheiser told the Source in an email. "...While I'm not the operations person, I anticipate the focus of the efforts this spring will be on the construction zone (the 500 acres)."

The City of Bend bought Juniper Ridge in 1990 from Deschutes County for $1. During the height of economic expansion just before the Great Recession, City leaders were drunk on possibility: They spent millions on plans to build a university, a business park and neighborhoods surrounded by parks and trails. These dreams turned into a nightmare as the city lost those millions in a botched land deal and the housing market simultaneously collapsed.

Real estate and stock investors were not the only ones to lose their shirt during the Great Recession. Hundreds of people in Bend lost their jobs, forfeited their homes and left town in the middle of the night. Some ended up in Bend's 21st century Hoovervilles: They set up makeshift camping communities at Juniper Ridge, off China Hat Road and on Central Oregon Irrigation District land on the outskirts of Redmond, among other public lands.

Now, as the City of Bend moves forward with plans of displacing upward of 50 established camps to make way for a yet-to-be-determined development, the conversation around where the people without homes will go is ramping up.

One option is to support them in relocating farther north, setting up a city-supported established camp. It's a plan endorsed by Bend City Councilor Barb Campbell as well as the Central Oregon Homeless Leadership Coalition. 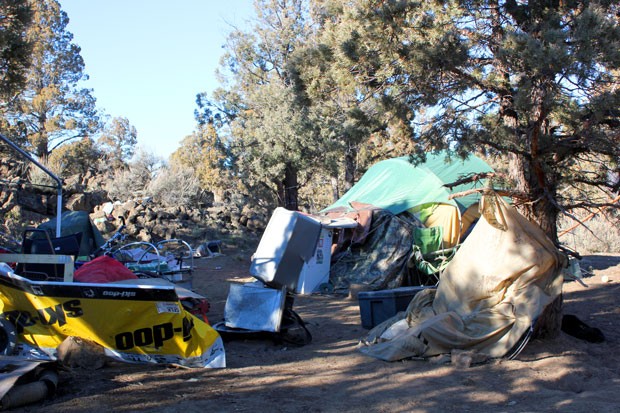 "I will propose that we provide dumpsters, port-a-potties and a contained cooking area so that people can make a hot meal without the danger of starting fires," Campbell said.

It's an idea Campbell has been pushing for years and that other city leaders, including Mayor Sally Russell, once championed. Without some kind of City support, there is truly nowhere for the people at Juniper Ridge to go, Campbell said. Local services are maxed out.

As part of the removal policy, the City will give people at Juniper Ridge a photocopied piece of paper with the phone numbers of local homeless shelters.

The Homeless Leadership Coalition sent a letter to the City of Bend on Friday opposing the eviction. It refers to the list of social services the city has prepared: "To the best of the HLC's knowledge, the resources have not been notified and community resources have not been verified... The shelters in Central Oregon are frequently at capacity. The regional warming shelters are scheduled to close on March 15, 2020... The HLC opposes the posting of eviction notices until adequate low-barrier housing or shelter has been made available to all those living at Juniper Ridge."

The letter proposes two temporary solutions for Juniper Ridge and asks the City for funding. One proposed solution is a mobile service center that would be available for people at Juniper Ridge on a weekly basis to provide food, a warm place to gather and social service workers to help people find future housing and apply for food and health care benefits (costing approximately $8,100 per year). The other proposed solution is a more permanent campground at Juniper Ridge with camp hosts and other facilities (costing approximately $220,000 per year).

"If people are being told to leave without anywhere to go, there needs to be a bigger conversation," said Colleen Thomas, co-chair of the HLC. "Who are we to say what a home is? We need to include those who are experiencing homelessness in this conversation as well."