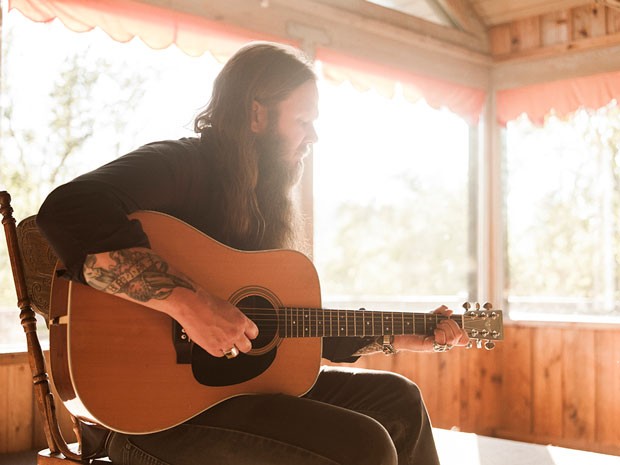 Whitey Morgan, a purveyor of pure, unadulterated country music, is headed to Bend this weekend for a show at the Midtown Ballroom. Morgan and his band, the 78's, are touring on the heels of his fifth studio album, "Hard Times & White Lines," released in October. Citing influences from Kris Kristofferson and John Prine, Morgan's latest album is everything you'd expect in a solid country album, from relatable stories of heartache to boot stompin' tracks that'll get you on your feet.

Ahead of Morgan's show, he spoke with the Source Weekly about his early musical influences and life in the recording studio.

Source Weekly: Tell me a bit about the recording process for the album.

Whitey Morgan: A lot of it is, I just bring the songs to the table and we learn them in the studio. We figure out the arrangement that kind of flows the best and we try to cut as much at once as we can, usually bass and drums, my electric guitar, because I'm usually the one who has my parts figured out already ahead of time... since we're on the road so much, we never have time to sit and rehearse out all these songs before we go into the studio. That kind of time off costs money and rehearsal spaces cost money. I'd rather just spend it in the studio and do it all at once, there. That's the way it's been, I think, with every record. I think it is working out. It gives you a little more time. You don't have to live with anything if you don't like it. We go in and lay down the foundational tracks and then put all the tasty guitar licks and harmonies and things on afterwards. It seems to work. I like doing it that way.

SW: You cover ZZ Top's "Just Got Paid" on your latest album. Who else has influenced your writing over the years?

WM: You know, many. Classic county and bluegrass, which is what I grew up listening to with my grandfather, and my parents were kind of more into Bob Seger, AC/DC, Fleetwood Mac — you know the classic stuff from the '70s. In my teen years I was way into punk rock, you know whatever, just rebelling against what I was apparently supposed to be listening to. But I came back to country music in my late teens, early twenties and my grandfather passed and I inherited his record collection. As far as what I do right now, he's probably my biggest influence... I guess it's kind of cliché, but it never felt so right. I never enjoyed playing music that much, the songs never really hit me that hard. Even when I was angry and playing punk rock at 15 years old, I thought those songs meant something to me, but there's such a deeper connection, emotionally, I guess, with country music.

WM: I've only played there once and it was at least six or seven years ago. It was a kind of a half-assed version of my band. I had a couple of guys quit right before the tour and, you know, it was a decent tour — there were a couple of good money makers — and I was not going to cancel. I remember playing that Bend show thinking, oh I have to come back to this town and get a redemption, because that was not my best show.