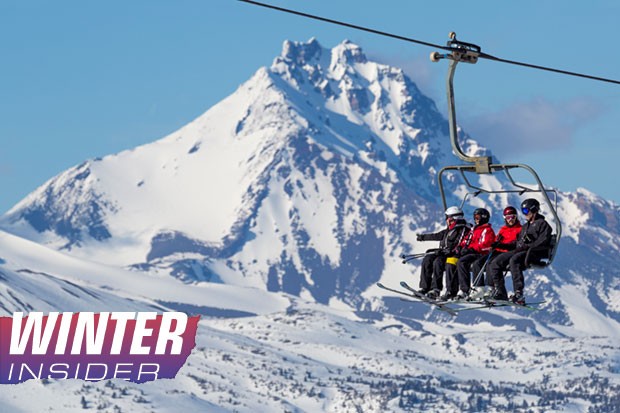 Snow riders, rejoice! It's time to wax your planks, dig out the snow clothes and start doing squats in preparation for the upcoming season. The shops are full of this year's gear, 10 Barrel's got Pray For Snow on tap and in bottles, and who knows, snow enthusiasts may get another year where Mt. Bachelor closes on the Fourth of July.

If you're new to Central Oregon, or you're just getting into the ski and snowboard scene, here's what you can expect two of Bend's closest slopes, Mt. Bachelor and Hoodoo Ski Area.

Mt. Bachelor is about 22 miles southwest of Bend. Depending on traffic, it can take about 45 minutes to get to the parking lots. In today's gas prices, that's about $8 in fuel round trip driving a Chevy Tahoe, or about $5 in a Subaru Outback. Although Bachelor hasn't released this year's day ticket prices, last season they were $96 for an adult day pass, teens and seniors were $78. Kids under five were free.

If you're more of a don't-wait-in-line-for-tickets person, an adult season pass is $1,159 for Bachelor, if you haven't purchased them already. The prices hover around $600 for the other different age groups.

Now that you have the basics, what really separates the two hills?

According to the Source's go-to man of the mountains, Chris Larro, here's the skinny.

Hoodoo is smaller, but that's not necessarily a bad thing. It has only five chairs that service 34 runs on 800 acres, compared to Bachelor's 11 lifts that give skiers and snowboarders access to 101 runs on 4,300 acres. Hoodoo has slower lifts, but it's also less crowded—think Bachelor five years ago on a Tuesday. However, Larro said, Hoodoo has steeper terrain—40 percent of its runs are black diamonds—and it has a more laid-back atmosphere, if you like that kind of thing. And Hoodoo has night skiing. You can literally ski for 12 hours, called the Marathon ticket, if your legs can handle that much riding.

Bachelor has more 360-degree skiable terrain and faster lifts like the Pine Marten Express high-speed quad chair—one of the eight high-speed quads Bachelor has to offer. It is more crowded than Hoodoo—ever waited in the ticket lines on a blue-bird Saturday?—but does have more parking and more lodge options for food and drink.

Bachelor also offers terrain parks for people who want to do aerials, rail grabs and other tricks. Mt. Bachelor has seven terrain parks, from the beginner Short Sands park to the The Point for advanced riders looking to get big air.

Mt. Bachelor sports the highest resort on the east side of Oregon, rising over 9,000 feet above the high desert. Riders can bomb over 3,000 feet of vertical drop, and the longest run is four miles. Bachelor gets an average of 462 inches of snow each year, according to its website.

Hoodoo has a vertical drop of over 1,000 feet from its 5,700-foot summit. The ski area sees about as much snow as Bachelor, averaging 450 inches, according to Hoodoo.

If you're jonesing to hit the slopes this year, Bachelor is usually open the weekend of Thanksgiving, depending on Mother Nature. Hoodoo said its lifts are usually spinning around the middle of December.